"Her irresistible charm saves her." This is how Anaïs' father sums up his madcap daughter. The weird thing is he's right. Although Anaïs is constantly running late, over-sharing with strangers, running roughshod over other peoples' schedules/hearts/minds, she is somehow so charming and adorable that not only do these inconvenienced people not mind, they fall under her spell, too. They forgive her, they cut her slack, they follow her around, wanting to be kept waiting again. "Anaïs In Love," the directorial debut of actress Charline Bourgeois-Tacquet, manages to make this make sense (mostly), primarily because of the humorous and alert lead performance from Anaïs Demoustier.

Anaïs spends half the movie racing at breakneck speed down sidewalks, up stairs, across fields, down hallways, into and out of elevators (she has severe claustrophobia), always half an hour late for everything (and sometimes she doesn't show up at all). She barely apologizes for keeping people waiting. She just breezes through, chattering non-stop. No one can get a word in, not even the obviously irritated landlady who wants to know why Anaïs is two months late with the rent. Anaïs is so confident about her "charms" that other people's obvious displeasure don't seem to bother her. She talks her way out of everything.

How does one play such a character without seeming like an unredeemable narcissist? Demoustier somehow pulls it off. She is natural and open. She does not push the character as an idea or a concept, and this is crucial because Anaïs, as the character is written, is a "type," the dreaded "manic pixie dream girl" who flits through lives making people stop and smell the roses, learn to love, etc. But Demoustier doesn't play her that way. Besides, manic pixie dream girls are usually seen through the eyes of the male characters who adore them. This story is told from Anaïs' point of view.

The movie opens with Anaïs' life in shambles. Her boyfriend Raoul (Christophe Montenez) has moved out, and Anaïs worries out loud constantly—to people who know her, people who don't—that she might not be capable of loving someone. Raoul's nickname for her is, appropriately, "Big Tractor," and he says to her at one point: "You don't realize what human interaction is." He's not wrong! Anaïs' mother (Anne Canovas) has cancer, and it's bad. Anaïs' dissertation—on passion in 17th-century literature—is at a total standstill. It's hard to picture Anaïs going to the library, sitting quietly, reading a book, taking notes. Her thesis mentor gives her organizational tasks, and then is (understandably) annoyed when Anaïs blows it all off.

At a party one night, she meets Daniel (Denis Podalydès), a man old enough to be her father, and married to a successful writer. The two start an affair, with very little fanfare (or feelings of guilt) but it's an affair with some quirks. The sex (by the looks of it, anyway) isn't great. In fact, there's barely any passion at all. The situation gets more complicated (and French) when Anaïs sees a televised interview with Daniel's wife Emilie (Valeria Bruni Tedeschi). Anaïs reads Emilie's books, is drawn to the writing, and so she takes the next natural step: she launches a mild stalking campaign. Everywhere Emilie looks, there is Anaïs: at book readings, on the sidewalk, at a literary conference (where Anaïs has to do odd jobs around the property in order to be allowed to even attend).

There are some similarities in all of this to Joachim Trier's "The Worst Person in the World" (particularly the women’s hairstyles, as well as all that running), but the mood and tone is entirely different, less meditative, less mournful. Anaïs never seems to be at risk of losing herself, of becoming trapped, of finding herself miserable and unfulfilled. It's hard to picture her feeling bad about anything. This is a major drawback. A lead character who never feels bad about anything who never apologizes, who expects forgiveness, is ... a "Big Tractor" indeed. The film is fairly low-stakes, which is another issue. Demoustier's behavior is at times maddening, yes, but it's always interesting to watch. "Anaïs In Love" doesn't view Anaïs as either an inspirational figure to emulate or a problem that needs solving. She is who she is. And she's already out the door, clattering down the stairs, calling out her goodbyes. 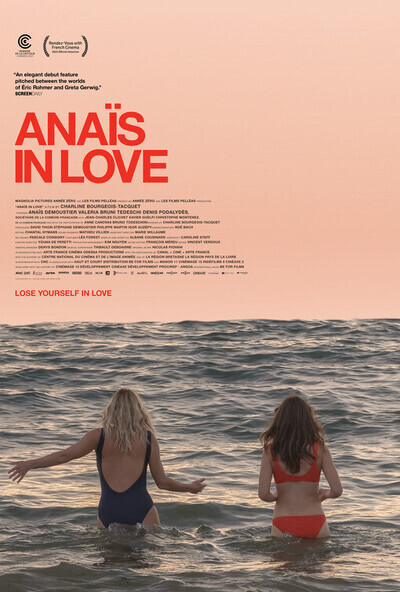