Oppressively bleak mood piece "Alléluia" is a horror film for people who like to be scared by a grim, joyless and thoroughly depressing character study. To be fair, the film's based-on-a-true-story subject doesn't exactly lend itself to screwball comedy. "Alléluia" is based loosely on the real-life case of the Lonely Hearts Killers, a pair of American serial killers whose mad love led to the murder of approximately 20 women in the late '40s.

In his tribute to the Lonely Hearts killers, Belgian co-writer/director Fabrice Du Welz ("Vinyan," "Calvaire") struggles to foster a claustrophobically unsettling mood that's all the more frustrating for its infrequent bursts of jet-black humor. Sadly, there's nothing funny, or especially provocative about "Alléluia" since the film's impressionistic style is so shallow that one can't help but feel like you're watching a technically accomplished vision of love according to an especially angsty goth teenager.

"Alléluia" is about the stifling tunnel vision that anyone who experiences love pangs goes through, as is made clear in a glaringly ironic line of dialogue: "Being in love is magnificent." That line is spoken by Madeleine (Stéphanie Bissot), a lonely single woman who is preyed upon by Michel (Laurent Lucas), a socially maladjusted lady-killer. Michel is supposed to be deeply troubled, but also mysteriously seductive. He's most attractive when he overcomes initial jitters, and impresses Gloria (Lola Dueñas), a single mother and Michel's future partner-in-crime, over dinner by speculating authoritatively about nearby patrons' personalities based on their footwear (Michel is a shoe salesman).

After that dinner date, Gloria falls very hard for Michel. You can tell she's enamored by Michel from the creepy, doe-eyed leer that Dueñas almost always has plastered on her face during Michel and Gloria's early honeymoon period. Soon afterwards, Gloria discovers that Michel seduces lonely women, and takes their money. Being an unhinged crazy with no discernible motives beyond pure blinkered desperation, Gloria enthusiastically offers to help Michel steal from hapless plain janes. Gloria's obsession with being Michel's assistant provides "Alléluia" with its narrative arc since she increasingly clings to their odds-and-ends love, though it's hard to tell based solely on the film's pseudo-evocative mood lighting.

Yes, "Alléluia" is an arty, dour film with a tedious style of atmosphere that is largely a product of natural lighting, and extreme close-ups. The result is a series of pseudo-naturalistic scenes where people don't talk to each other but rather sulk and scream and hesitate dramatically with the lights out. Because that's apparently what love is, a series of technically accomplished, impressionistic shots of people's jaws opening, and partially shutting, and then some frantic humping by a nearby window, and some scattered scenes where the main characters' intense bond is related through maniacal laughter, and mercurial, body-language-heavy exchanges. Yes, love is strange, but only as strange as its characters are freakishly moody.

Watching "Alléluia" wouldn't be such a wretched experience if its actors were better utilized. Since Du Welz wants us to feel like we're moving inexorably through a never-lightening tunnel of amour, Lucas and Dueñas have to carry the bulk of the film. They could probably do it too if their characters weren't stuck pitching from one emotional extreme to another. So watching "Alléluia" is like being chauffeured by experienced drivers who only know how to drive Automatic, but have suddenly decided to learn how to drive stick shift during bumper-to-bumper rush hour traffic in the Holland Tunnel. There's a lot of gear-grinding, and awkward halting, and you just want to get out now, now, please now. But that's not the actors' fault, but rather the fault of their characters' creators.

Because Du Welz is a cruel authorial God, the only respite viewers get from his film's tedious tone-shifting is a periodic spurt of gallows humor. Like "Calvaire," Du Welz's breakout film, "Alléluia" owes a lot to the formative nihilism of the original "Texas Chainsaw Massacre," another based-on-true-events chiller whose pitiless view of humanity is confirmed by graphic, and quasi-absurd, and largely meaningless violence. But while Leatherface's murders are a grim prediction of a post-familial hellscape looming on the periphery of America during the mid-'70s, Michel and Gloria's killings are just pseudo-universal, context-free slayings that illustrate the timelessness of psychopathic obsession. In an especially mortifying scene, Gloria slowly bludgeons one of Michel's victims to death. The scene is shot in such a way (i.e.: without much in the way of appreciable lighting) that you only notice Gloria's weapon after she discards it: a heel-less shoe. Joyless love is in the air throughout "Alléluia," and it smells pretty bad. 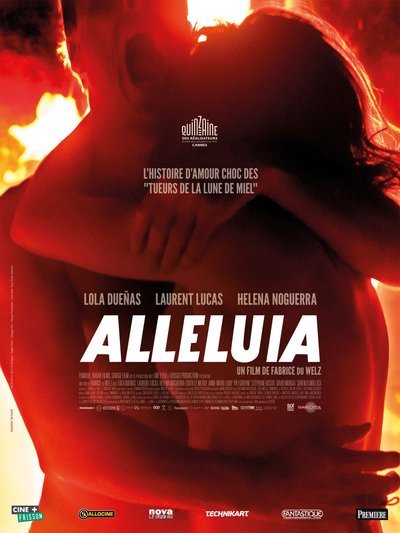