I rarely see a movie so original that I want to tell people to just see it without reading any reviews beforehand, including my own. David Lowery’s “A Ghost Story” is one of those movies. So I’m urging you in the first paragraph of this review to just see it and save this review for later. If you want more information, read on. There are no spoiler warnings after this because as far as I’m concerned, everything I could say about this film would constitute a spoiler.

This tale of a man who dies young and lingers around the property where he and his wife once lived is bound to be one of the most divisive films of the year. I didn’t know anything about it going in, except that its main character was a person who dies and spends the rest of the movie walking around mute, wearing a white sheet with eyeholes cut out of it. The film is a ghost story, in the sense that there’s a ghost in it, but it’s also many other things: a love story, a science fiction-inflected story about time travel and time loops, and a story about loneliness and denial, and the ephemeral nature of the flesh, and the anxiousness that comes from contemplating the end of consciousness (provided there’s no life after death—and what if there isn’t?).

The characters are so archetypal that they don’t have names, just initials. C (played by Casey Affleck) is a musician who lives with his wife M (Rooney Mara) in a small house surrounded by undeveloped property somewhere in the vast flatness of Texas. C dies in a car crash early in the story but continues to linger on as a ghost, silently observing his wife’s grief and her eventual exit from the home they once shared. He stays in the house as new tenants move in, including a single mother (Liz Franke) and her two children (Carlos Bermudez and Yasmina Guiterrez) and some young, single people who throw parties with lots of bohemian artist-types. Time keeps moving forward. At a certain point the house gets leveled and replaced by a gigantic luxury condo-hotel type of development. C stays rooted to the spot where he died, as if he’s stuck in the “denial” phase of the grieving process.

The movie’s two most fascinating formal traits are its decision to keep C under the sheet for much of the film’s running time, and the way it moves its story along with hard cuts rather than dissolves, fades-to-black, or other signifiers that a lot of time has passed. The sheet denies the film’s leading man most of the tools he’d normally use to communicate emotion. He must instead approach the character as if he were onstage in a play where gestures are more important than words, and try to convey surprise, sadness or anger by holding his head and shoulders in a particular way, or turning quickly instead of slowly to look at something.

But this opens up a different kind of relationship between character and viewer: we’re projecting ourselves onto C as we might as children playing with dolls or stuffed animals. Simple, powerful emotions can be summoned that way, and it’s those sorts of emotions that are this movie’s specialty. There were many stretches where I was reminded of European art cinema classics like “Stalker” and “The Passenger,” which derive much of their power from asking you to commit to staring at the images the film has put in front of you, and think about what they might mean and how you feel about them. There are other times when the film is reminiscent of “Groundhog Day,” in its ability to weave guilt, karma, and fear of change into a story that might otherwise have played as a light diversion.

The hard cuts that move us through the story convey the idea that C perceives time differently than we do. In a scene that involves decay, which I won’t describe in too much detail here because it occurs in a context I didn’t expect to encounter, a body becomes a skeleton in a series of cuts that last about 30 seconds. The deeper we get into C’s story, the more Lowery teases our perceptions of time, until by the end he’s got us questioning the idea of singular, linear experience. (“A Ghost Story” would make a great double feature with Shane Carruth’s “Primer” or Richard Linklater’s “Boyhood,” two other Texas films about the perception and experience of time.)

“A Ghost Story” feels bracingly, at times alienatingly new. It’s a movie you can’t be quite sure how to take. There are moments where the movie seems to be handing you keys to interpretation, but I’d caution viewers against looking at such scenes for answers, because they have a rope-a-dope quality—as if they're designed to bait and trap those who would sneer at this kind of movie. In any event, this is a film that's more inclined to ask questions than answer them, much less give life advice. A long monologue by a party guest (Will Oldham) about humanity’s doomed attempts to leave traces that last, especially through art, would seem to suggest that a song C writes for M will outlast him, but we have no evidence of that. The film’s presentation of ghosthood as a purgatorial in-between state, inhabited by individuals who refuse to let go of the life they can no longer have, jibes with many Western religions’ ideas about the afterlife, but I don’t think the resolution of C’s story gives us any hope of Heaven; to me it seemed more like a warning to be at peace with the possibility that we may never know the answers to the big questions.

I should admit here that any take I can offer is provisional. I need to see the film a second time to sweep away preconceived notions that might’ve been lingering in my mind during my first viewing of “A Ghost Story.” The movie is so simple in its storytelling and its situations are observed so patiently that the result has a disarming purity, as if Lowery jammed a tap into his subconscious and recorded one of his dreams directly to film. It’s probably the closest that a lot of people are going to get to seeing a late-period silent movie on a big screen—a melodrama that deals in big ideas and obvious symbols, and that puts across fantastical concepts, such a ghost haunting the landscape over a period of decades, by putting a sheet over its leading man and having him walk around slowly and stare blankly at stuff. (Cinematographer Andrew Droz Palermo shoots the movie in the old-fashioned, square-ish “Academy” ratio, letting us see the rounded edges of the frame; this has a constricting effect, so that we seem to be spying through a keyhole at someone else’s life.)

People either seem to love “A Ghost Story” or hate it, with no in-between. It got mostly very positive notices during festival screenings, but on the eve of its commercial release I’ve found myself arguing with colleagues who think it’s the Emperor’s New Clothes and find it too precious, too sentimental, too much of a one-joke movie, or not enough of one thing or another thing. I loved everything about it, including the scenes I wasn’t sure how to take. I recommend seeing it in a theater because it’s a movie that has as much to say about our perception of time and permanence as it does about love and death. Much of the impact that it has, positive or negative, comes from having to sit there and watch it without interruptions and think about what it’s showing you, and how. 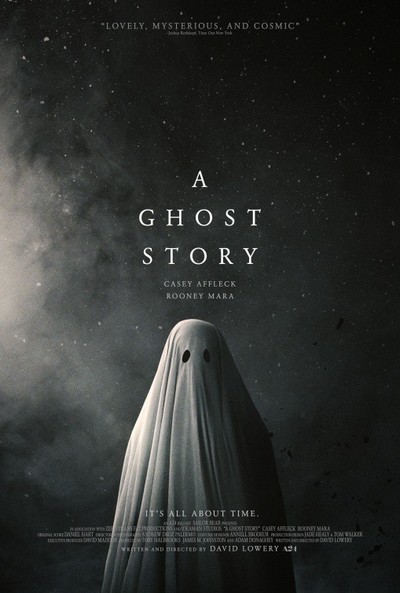 Rated R for brief language and a disturbing image.