"Midnight in Paris" but Cannes has just begun

Arriving in Cannes by bus from the Nice airport provides a thumbnail tour of the town, from the more seedy homes on the outskirts to the swanky hotels on the waterfront. The palms lining the Croisette, the festival's de facto main drag, may be the ubiquitous symbol of city, but a few blocks away the plane trees, cypresses, and the prolific climbing roses of Provence are a more common sight. Walk a short distance from the Festival Palais and there are conspicuously un-chic restaurants where local cops congregate for dinner in the back room and retired couples hang out for a smoke and an evening beer, more often than not, with a fluffy mutt under the table.

In a way, my first reminders yesterday of everyday life in everyday France were a bracing counterpoint to this morning's press screening of Woody Allen's romantic fantasy "Midnight in Paris." The festival's opening night film is a colorful valentine to Paris, indulging and gorgeously illustrating the director's every memory and cherished illusion of the city. I've never been a big Woody Allen fan, but "Midnight in Paris" is loads of fun. 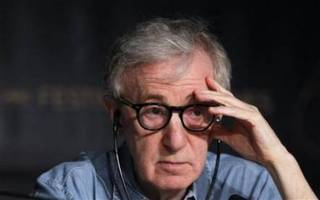 The film opens with a morning-to-night sequence of views of the city's most iconic sights: Montmartre and the Moulin Rouge, the Seine, the Arc de Triomphe and the Champs-Elysees, the narrow streets of the Left Bank, and the Eiffel Tower. That opening alone is a tourist board's dream. At the press conference later, a journalist asked Allen, who mentioned that he thought of the title long before he had a story, whether these postcard-worthy views were his own impressions of Paris, or were meant to represent the point of view of his characters. Perhaps the French questioner was hoping for the latter, but Allen replied, "I learned about Paris the way all Americans do--from the movies. I wanted to show the city emotionally, not realistically, but through my eyes.

Owen Wilson plays Gil Pender, a successful but unfulfilled Hollywood screenwriter on vacation in Paris with his finacee Inez (Rachel McAdams) and her parents. Allen has the ugly American tourist thing down pat, fashioning Inez as a nagging, albeit sexy, materialistic airhead, and her parents as boorish conservatives with a major sense of entitlement. By contrast, Gil is a somewhat loony innocent whose dream of becoming a serious writer involves a vision of wandering the streets of Paris with a baguette under his arm. 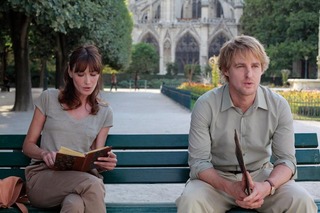 Gil and the ugly Americans are soon parted when, lost, tipsy, and alone one night, he's picked up at the stroke of midnight by a pair of revelers in an antique car. This is where the film really cuts loose, because it develops that the car is a time machine that whisks him to a party in 1920s' Paris, where Cole Porter is at the piano, and Scott and Zelda Fitzgerald become his new pals. Soon he's exchanging confidences with longtime idol Ernest Hemingway, meeting the likes of Gertrude Stein, Dali, along with Picasso and his alluring, self-assured mistress Adriana (Marion Cotillard).

Allen didn't need much research for these characterizations, as he explained later; "These were all the icons of my young adulthood." Adrien Brody, who plays a very over-the-top Dali, remarked that Allen urged him to portray both the genius and the madman, dispelling the prevailing opinion that Allen gives his actors no direction. Judging by the enthusiastic performances all around, the actors in these key cameos evidently relished their roles, from Corey Stoll as a pompous Hemingway and Kathy Bates as a nurturing Stein, who readily agrees to critique Gil's novel, to France's first lady Carla Bruni, who plays a tour guide at the Rodin museum. 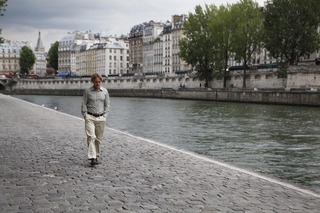 The film's underlying theme of nostalgia is mediated by the lesson of learning to appreciate the value and the imperfection of your own time. Trite as that may sound, it's satisfyingly delivered within the context of the story. Allen makes it resonate in a very funny and beautifully staged sequence in which Gil and Adriana are taken back to a yet earlier time in Paris--the Belle Epoque of the 1890s, where they meet Toulouse Lautrec and Gauguin. Despite his own well-known obsession with earlier eras, at the press conference Allen said, "It's a big trap to think that living in another time would be better. I wouldn't really like to go back to another time." 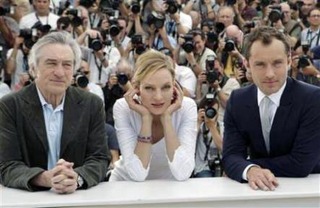 I later checked out the jury press conference because it's the thing to do on opening day. It's also a chance to eyeball the luminaries on this year's jury. They are: jury president Robert De Niro; actors Martina Gusman from Argentina, Uma Thurman, and Jude Law; Hong Kong producer Nansun Shi, wife of popular director Tsui Hark; directors Olivier Assayas of France, Mahamat-Saleh Haroun of Chad, and Johnnie To of Hong Kong; plus novelist Linn Ullman, daughter of Ingmar Bergman and Liv Ullman.

Since the jury has not yet seen a single film, these affairs are much the same from year to year. Every juror is honored to be chosen, inspired by the company of their fellow jurors, and swears to be an impartial arbiter of art. Yawn. I check out the fashion statements, my secret interest. 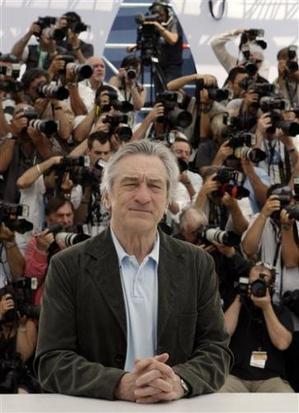 Thurman puts on her oversized shades. The place is stifling, but she pulls a fluffy angora cardigan over her white A-line dress and stretches the sleeves down over her hands. Some major diamonds dangle from her ears, and they're flashing all the way to the back of the room. Nansun Shi, in a striking forest-green silk shift, also sports big-time sparklers. Loaned by Chopard or some other festival sponsor, I wonder? In a sharply conservative dark suit, white shirt and tie, Jude Law looks like stopped off on his way to a wedding.

This press conference's only of excitement came with a startling pair of questions from one of the journalists. Addressing De Niro and referencing two movies, "Taxi Driver," and "Raging Bull," he said, "Are you talking to me" and "Did you fuck my wife?" At the second question, the room went silent except for a few nervous titters. De Niro's face reddened up noticeably and moderator Henri Behar snapped, "I don't see the relevance of the question." Then the moment was over, and this convocation soon was too, with Behar's closing remark, "The fun is over; now the work begins."

The work begins indeed; tomorrow is the first full day of the festival, and that day begins at 8:30 am.