A good time was had by all at the Cannes Film Festival today at the competition press screening of “L’Amant Double,” by French director Francois Ozon (“Swimming Pool”). Based on the novel Lives of the Twins by Joyce Carol Oates under the pseudonym Rosamond Smith, this stylish over-the-top genre cocktail combines satire, melodrama, tongue-in-cheek horror tropes complete with a David Cronenberg homage, cats galore, and lots of sex. It may just be Pedro Almodovar’s thing, and at Cannes, the jury president is king. Only two more days until the jury begins its secret deliberations.

Circles and double images are the visual motifs that dominate “L’Amant Double,” starting with an internal look at heroine Chloe’s (Marine Vacth) gynecological exam, and including the long spiral staircase she ascends to sit in a mirror-image face-to-face meeting with her handsome blonde psychiatrist Paul (Jeremie Renier). After a few appointments, Chloe declares herself cured of psychosomatic stomach pains, and Paul cuts her loose as a patient because he’s fallen in love.

The two move in together, and Chloe snoops through Paul’s things to find that he grew up under another last name. He denies it, but she discovers a psychiatrist of that name and makes an appointment, calling herself Eva. The new doctor, Louis, looks exactly like Paul, and reveals he’s his estranged and more successful twin brother. On their third appointment, he seduces her roughly.

Chloe/Eva begins to lead a double life, with gentle, good-humored Paul at home, and abusive, sex-crazed Louis in a palatial bedroom with a mirrored wall. Paul hates cats, and gets upset when Chloe’s enormous grey pet gives him the fish-eye when they make love. Louis owns a devilish-looking feline that stretches out against her belly after sex. This may be the first film to feature a pregnant cat’s ultrasound when Louis uses the example of kittens to explain the gestation of twins, and the theory that one of them is always dominant.

Ozon makes it wilder and wilder, with dream sequences, hallucinations, and the double life all blending together. One complication after another is heaped on this saga.

Hopes have been running high for the American independent feature “Good Time” by brother co-directors Joshua Safdie and Benny Safdie, in competition here for the first time. “I heard it was good from someone who got a sneak preview,” whispered a colleague from a monthly magazine, as the lights were going down on another film last night. The thirty-something Safdie brothers are still in the relatively early stages of their careers, and their short list of co-credits includes the basketball documentary “Lenny Cooke” and the low-budget dramatic features “Daddy Longlegs” and “Heaven Knows What.”

Any talk of the Palme is likely muted after today’s press screening. “Good Time,” starring an intense and energetic Robert Pattinson, and Benny Safdie, is a standard crime caper/heist movie featuring the kinds of twists, bad decisions, and downbeat ending that often pass for an indie film’s fresh take on the genre. If the directors dream to move on to mainstream thrillers and TV cop shows, this is their calling card.

Connie (Pattinson) involves his mentally disabled brother Ray (Buddy Duress) in a nervously executed bank robbery in Flushing, NY, that aborts in a bungled getaway when he naïvely doesn’t figure on the exploding dye pack that the cashier stuffed in the stashed cash. Ray is captured and jailed, and by the time Connie’s attempts to raise bail fail, his brother is in the hospital under guard. Kidnapping the unconscious and unrecognizably bandaged man in the bed and spiriting him away is the first step in an escalating all-night adventure that will involve a change of partners mid-stream.

“Good Time” is a film that relies on fast cutting and a manipulative soundtrack to drive the action. The ominous crashing chords of tuneless techno-pop accompany Connie’s furtive race down a hospital hallway with his inert companion in a wheelchair. Every scene of action or suspense gets its jolt of energy from the ever-present pulse-pounding rhythms. The film’s contemporary take on neo-noir involves scenes lit by TV screens, phones, car interiors and streetlights.

Connie is a chameleon with a credible fib ready for every crisis. With a bad-luck story he wangles his way into the home of a sympathetic African American grandmother to wait for backup that never comes. His unconscious charge awakens and emerges from under the bandages as a battered ex-con named Nick (Benny Safdie). This story moves into a new phase involving a drug stash that Connie wants in on. The film’s otherwise straightforward narrative takes a detour with its one and only flashback, affording Safdie’s Nick a fast-talking audio showpiece of a monologue to narrate his back-story.

The prelude to the finale involves some black comedy and a series of chases on foot, first through an amusement park’s darkened house of horrors, and then through the park itself, which gets lit and set in motion, a move that is compulsory for any film featuring a night scene in an amusement park. 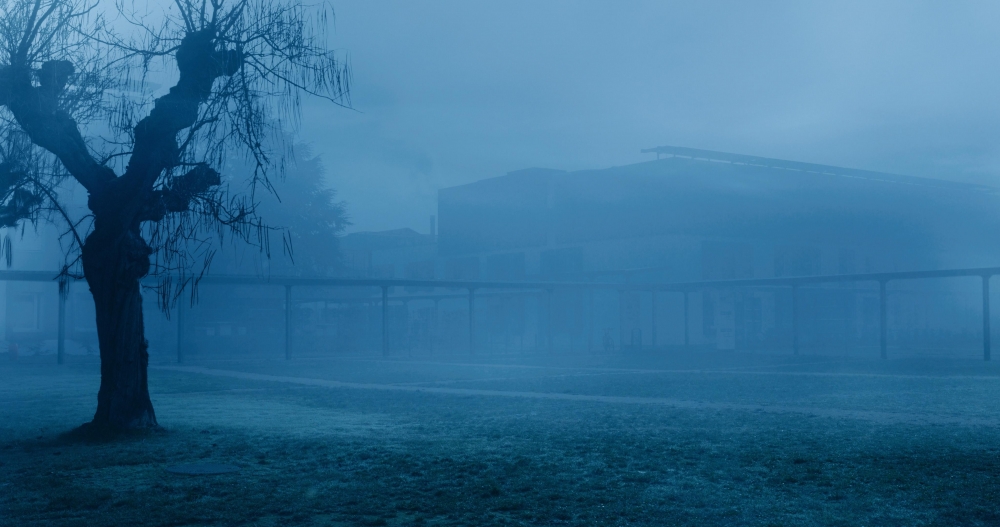 French filmmaker Raymond Depardon (“Captive of the Desert,” “Empty Quarter”) is equally famed as a journalist and still photographer. In his documentary work, he has returned many times to the subject of incarceration. “12 Days,” the prolific director’s new documentary, received a special screening out of competition. The film is composed largely of carefully composed but unembellished scenes covering intimate court hearings in which ten people who have been involuntarily committed to a mental institution receive the hearing before a judge that French law requires.

A meek little man with a history of schizophrenia shrinks into his fleece-collared jacket as he tells the judge, “I hear the voice of the electric chair.” A middle-aged woman with a corporate accounting job becomes distraught as she describes that it took twelve co-workers to subdue her when she experienced an incident at work. A young man barely over twenty confides that he fears that his neighbor is a terrorist, so he had to confiscate his gun just in case. It’s all starkly clinical content but nakedly human in its impact.