In 2001, Lenny Cooke was the #1 ranked high school basketball player, placing higher than Carmelo Anthony, Amar'e Stoudemire and LeBron James. Filmmaker Adam Shopkorn chronicled Cooke's rise in over 100 hours of footage. Shopkorn turned down a request to follow LeBron James, though James did pass Shopkorn's viewfinder on more than one occasion. When Cooke went undrafted in 2002, Shopkorn abandoned his Lenny Cooke movie. In 2009, the footage was acquired by sibling directors, Josh and Benny Safdie, who edited it into the documentary "Lenny Cooke."

In addition to shaping the material, the Safdies append it with new footage shot in 2012 with an older, somewhat wiser Lenny Cooke. Before the new section kicks in, "Lenny Cooke" has a refreshing fly-on-the-wall feeling. It doesn't rely on talking heads to drive the narrative. We follow Cooke as his high school star rises, meeting his best friend, his coaches, his mother, and the aforementioned future NBA stars Anthony, Stoudemire and James. We also meet the wealthy woman who takes him into her Old Tappan, New Jersey home so his high school career won't be interrupted.

Cooke is an impressionable teenager, but this isn't a film about a good kid gone bad. There's a level of introspection to Cooke, who is often seen discussing his options about going to college vs. entering the NBA draft straight out of high school. Cooke and his buddies discuss Kwame Brown, who entered the draft the year before Cooke's eligibility, and consider what they'd do with the salary Brown was offered. Their dreamy ideas are countered by former NBA coach Mike Fratello, who presents a shocking breakdown of just how little a million dollars will get you in the NBA. After taxes, agents, fees, insurance and other necessities, a player was making less money than someone with far less yearly gross.

It would seem that Shopkorn made the wrong decision by following Cooke, but hindsight is 20/20. When Cooke enters the draft in 2002, he was hotter than the younger LeBron James. One of the best scenes in "Lenny Cooke" details Cooke's big game against James, the outcome of which looked like many last second King James heartbreakers. There's also footage of Cooke squaring off with his fellow draftee Stoudemire. When the draft ended, Stoudemire was on his way to the NBA, and Cooke was never called to the league.

The Safdies leave a lot of room for a viewer to meditate on what's being shown and said. I found my mind wandering to hoop dreams in general, and "Hoop Dreams" specifically. That's a much better documentary, but it also deals with the notion of basketball as a way out of poverty. "Lenny Cooke" offers some harsh truths about this path; one coach throws out the tiny number of NBA players in the league and the much larger number of high school and college basketball players country-wide. "It is literally a one in a million shot," he tells his players.

In another scene, St. John's coach Mike Jarvis equates the NBA drafting kids out of high school with slavery. He paints the NBA as a predator feeding off hungry, immature kids and discarding them if they don't deliver, or if something better comes along. I wanted more of this discussion, especially since the drafting rules of the NBA were altered in 2006, making high school graduates wait a year before being eligible for the draft. It sounds like a precaution, but how much maturity difference there is between 18 and 19?

"Lenny Cooke" doesn't play sides, instead opting to focus on its subject's rise to the draft before shifting gears to the present time. The Safdies find Cooke, now 30, in Virginia. A motivational speaker, Cooke occasionally watches footage from his heyday but doesn't seem destroyed by the outcome of his career. We learn that Cooke played in numerous other basketball leagues, both here and abroad, and was a star in many of them. With his 11 year old son and his fiancée, Cooke has relocated to his mother's hometown.

Cooke speaks candidly about why he entered the draft and why he played for those other leagues. While his comments and interactions with family and friends are very interesting, the method by which they are delivered constitutes "Lenny Cooke's" one major problem. This footage is so poorly shot, I became frustrated. In comparison to the first 70 minutes, these last 20 look markedly terrible. A potentially riveting scene of Lenny's fiancée describing her take on Cooke's career is undercut by amateurish framing and zooms. Another scene of Cooke arguing with his best friends practically screams for a shot of all parties in the same frame. And a CGI shot of the elder Cooke talking to his younger self is shameless, as if the filmmakers were unsure of just how good they'd been at presenting their information without sports fiction-style manipulation.

Still, this is quite a good sports documentary, moving and unafraid of making you work for its pleasures. Until the last section, the Safdies do a great job selecting and editing footage that tells their story intelligently and passionately. I felt as if I were getting to know Lenny Cooke as well as the means by which a kid from a neighborhood not unlike mine could wind up in the NBA draft.

I've read several reviews that call Cooke's trajectory "heartbreaking." Why? Yes, he didn't make it to the NBA, but his life didn't stop, nor did it become useless. Cooke himself explains that, despite his fantastic basketball instincts, he was doing all this because it was expected, not wanted. We all have big dreams, and for many of us, they simply do not come true. But life goes on, and we play the hands we're dealt. If those cards are played right, one's life is not rendered useless. Lenny Cooke may not be an NBA hero, but to some kid listening to his motivational speeches, he might be a hero nonetheless. 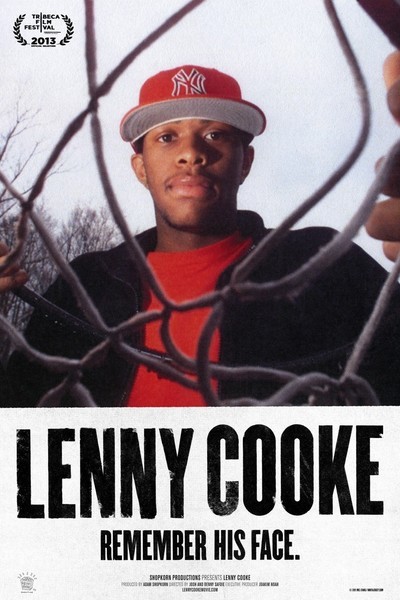 Lenny Cooke as Himself