As the 70th anniversary Cannes Film Festival approaches the mid-point, the consensus among press delegates seems to tip more and more to the opinion that this is a lackluster year for the competition. At the level of those of us sitting in the seats each day, missing are the hot debates concerning possible Palme d’Or winners. No one knows what Pedro Almodovar’s jury will do, but speculation all along has settled on the possibility that two-time Palme winner Michael Haneke (“The White Ribbon,” “Amour”) will break the festival record and make it three with “Happy End.”

The lukewarm reaction to tonight’s press screening of “Happy End,” signaled by a smattering of polite applause and a mild chorus of boos, likely dashed a great many hopes that it will at least be considered the festival’s popular favorite. The official one-sentence description of the film is: “A snapshot from the life of a bourgeois European family.”

To follow up on Haneke’s metaphor for his film, like many a snapshot, it is slightly unfocused in its view of the subject, and the background remains blurry. During the credit sequence, there is a strong indication that “Happy End” could mark Haneke’s return to the cinema of cruelty and transgression represented by an early film like “Benny’s Video” or a later one like "The White Ribbon." A child’s phone video chronicles the deliberate poisoning of her guinea pig, the trial run for her plans for her mother.

The 13-year-old child is Eve (Fantine Harduin), and she is sent to live with Thomas Laurent (Mathieu Kassovitz), her divorced father, a doctor who lives with his new wife and baby. He’s a scion of a family that owns a construction company empire, and the family home is a palatial mansion in the south of France. This household includes his sister Anne (Isabelle Huppert), who functions as the head of both the family and the corporation, their elderly ailing father Georges (Jean-Louis Trintignant), Anne’s ineffectual son and heir apparent Pierre (Franz Rogowski), and a married pair of Moroccan servants.

Eve settles awkwardly into this family group, but the focus of the story does not remain on her. There is a major accident on a Laurent company construction site. A workman is killed, and Pierre is charged with proving himself by smoothing over the legal aspects and the compensation issue. Anne is having an affair.  Thomas is exchanging endless kinky X-rated e-mails with an unknown woman. Georges schemes for an escape that will horrify his family. The film’s potential for death and moral transgression is so far invested in Eve, but Haneke continues to only hint, while following other strains of narrative that don’t connect in a meaningful way, including a swipe at the immigration issue that goes nowhere.

“Happy End” is a thinner and more scattered piece of work than might be expected of Haneke at this stage in his career. None of these characters are clearly defined, and each serves an ambiguous purpose in a larger story that feels incomplete rather than open-ended. 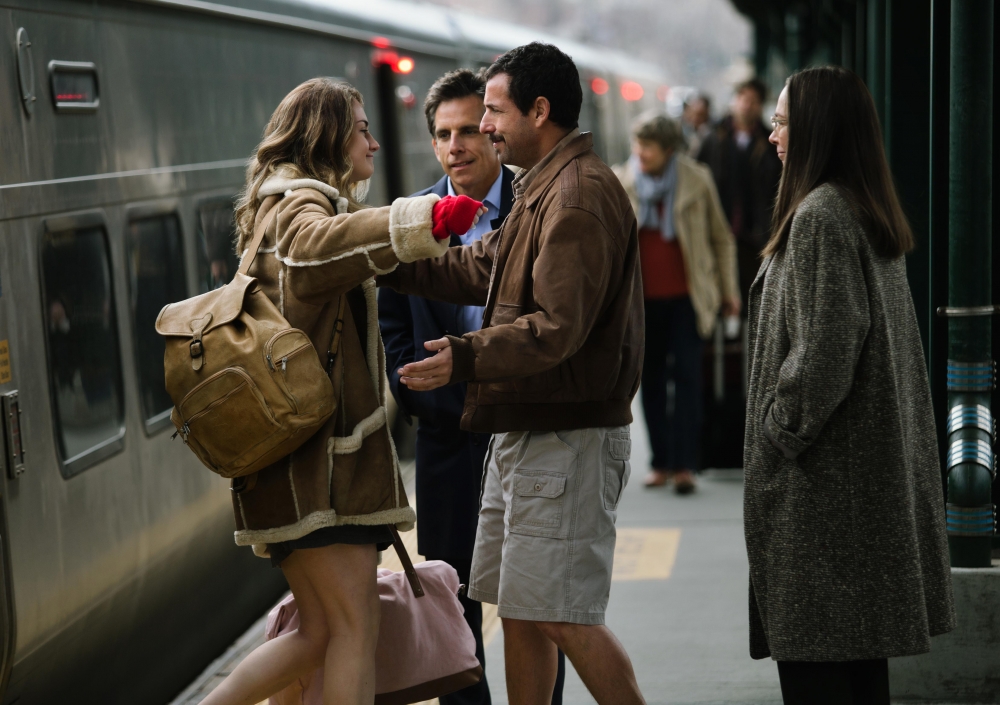 New York-based American director Noah Baumbach (“Frances Ha”) is in the Cannes competition for the first time with “The Meyerowitz Stories (New and Selected).” It may be his first time here, but he earned an Oscar nomination and three Golden Globe nominations for “The Squid and the Whale” in 2006. “The Meyerowitz Stories” features a lineup of known names, even in the small roles, and the cast includes headliners Adam Sandler and Ben Stiller, plus Dustin Hoffman, Candice Bergen, Emma Thompson, Grace Van Patten, and Adam Driver. In terms of demographic appeal, this cast spread would seem to have it covered from 18 to 80.

In line with the themes of Baumbach’s earlier films, “The Meyerowitz Stories” is a family saga and comedy/drama that treats dysfunction, alienation, separation and attempted reparation. Grizzled patriarch Harold (a bearded, grey-haired Hoffman) is a self-absorbed, egocentric sculptor and retired academic. He’s a four-times married father of three adult children, Danny (Sandler) and Jean (Elizabeth Marvel) by his second wife, and Matthew (Stiller) by his third wife. He lives in a Manhattan townhouse with his fourth wife Maureen (Thompson), a loony New Age-styled recovering alcoholic.

The film is divided into chapters, three of which develop the back-stories of Danny, Matthew, and Jean. Sandler gives a nuanced and impressively poignant performance as Danny, a soon-to-be divorced house-husband who has never held a job, and more than anyone, has felt the life-long impact of his father’s disdain and neglect. He demonstrates a bright talent as a lyricist and pop composer, but has never had the confidence to pursue a career. His daughter Eliza (Van Patten), his emotional anchor, is a bright aspiring filmmaker about to start college at Bard.

Harold is a feisty, bombastic contrarian, whose interactions with his wife and children center on his own wants and needs, his real and imagined artistic accomplishments, and the grudges he holds against those who have not paid him sufficient homage. Hoffman dominates every scene he’s in, using his supercilious authority to enforce a family pecking order. Matthew, now a successful financial advisor, is his golden boy, the son he brags about. Matthew’s half-siblings Danny and Jean are the also-ran kids, who appear to have long-since accepted their second-tier status.

“The Meyerowitz Stories” opens with a family dinner including all but Matthew, soon to arrive from California. There’s a nebulous plan for an exhibition to cement Harold’s neglected legacy as an artist, and talk of selling the townhouse, complete with his body of artwork, a subject that opens old wounds for Danny. When Harold is soon after stricken with a brain embolism and hospitalized, the siblings come together, only to have old rivalries, childhood resentments, and a score of hurts, slights, and unresolved conflicts flood to the surface as they still see themselves as rivals for their comatose father’s love.

Baumbach expertly and quite realistically creates the dynamics of this alienated family, with an especially moving evocation of the wreckage wrought by the withholding of a father’s love. Even in a comic context, the sting is felt in Danny’s timid hold on full-fledged adulthood, the strain of Matthew’s unwanted burden as favorite son, and Jean’s stoicism. Sandler and Stiller get to air the brothers’ differences in a physical altercation that involves a humorous go at physical combat, and team up in a goofy act of vandalism to avenge a childhood wrong done to Jean by a family friend.

It appears that psychic damage stops at the generational divide, and granddaughter Eliza, Danny’s child, is the one to resurrect Harold’s legacy. The film’s resolution is perhaps a little too pat. 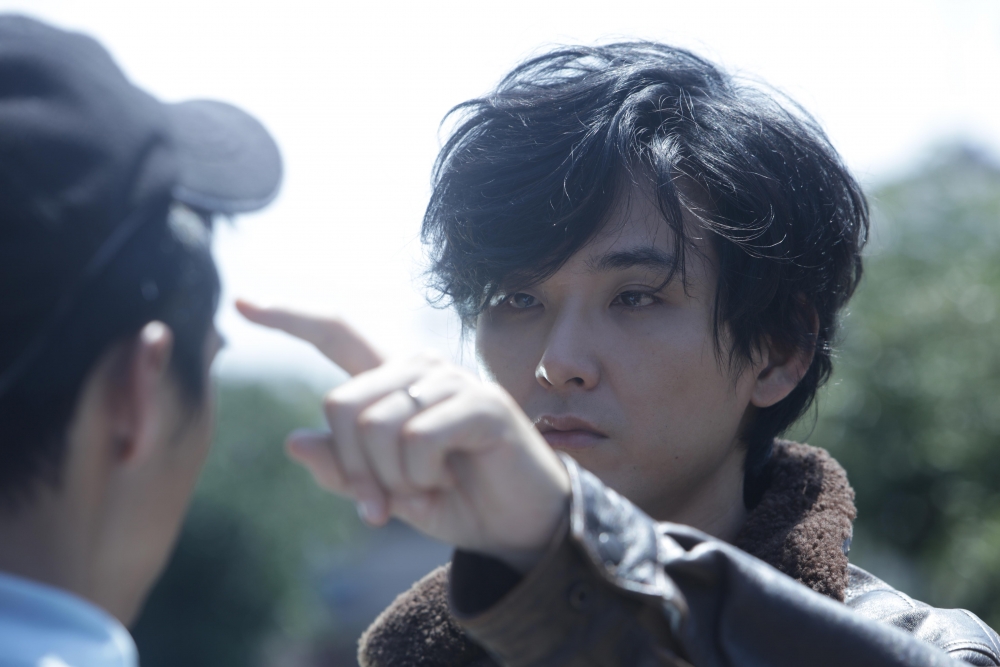 For almost twenty years, Japanese director Kiyoshi Kurosawa (“Creepy”), known for highly idiosyncratic supernatural horror and detective films, has been coming to Cannes with work in various sections of the festival. “Doppelganger” was in competition in 2003, and he won the prize of the A Certain Regard sidebar for “Tokyo Sonata” in 2008. He’s back in A Certain Regard with “Before We Vanish,” featuring a sci-fi plot.

Kurosawa usually delivers the goods in terms of keeping the viewer off balance with threatening clues and ominous happenings that build tension and dread, but not this time. “Before We Vanish” opens with a promising teaser of a sequence. The mutilated body of a middle-aged woman lies on her living room floor, a young girl, her school uniform drenched with blood, standing over her. The girl nonchalantly walks away down the middle of the highway as a truck skids into a crash behind her.

Narumi (Masami Nagasawa) takes her disoriented husband Shinji (Ryuhei Matsuda) to the doctor for tests. Results are inconclusive, but she is told that he may have early onset Alzheimer's. Shinji takes to wandering around town, and attempts to enter a neighbor’s home, claiming it belongs to him. A very confusing and amorphous plot develops, in which Shinji’s body and brain have been taken over by an alien. There is more than one alien in town, including the one who invaded the schoolgirl. They are able to transfer from one body to another, and they subjugate some humans as their guides.

With the touch of a finger to a forehead, the aliens are able to empty the brains of victims of selected concepts and memories. Shinji visits his wife’s office, and removes her lecherous boss’s memory of his work. The man is next seen frolicking over the desks like a child while throwing paper airplanes. Meanwhile, a detective who has the killer girl in custody, and a newspaper reporter covering the case, together encounter another alien, who has plans for them.

As realized, this story is disappointingly sluggish, confusing and free of tension. Since what the aliens do has little outward effect on humans, and because they appear human in form themselves, it’s difficult to understand what they are up to and why. There is much talking and not much doing, which is definitely alien territory for Kurosawa.