Who nowadays makes plush-looking feature films in black-and-white? Well, Noah Baumbach does, and if you consider that his “Frances Ha” lavishes its gorgeous monochromes on contemporary New York and the luminous countenance of Greta Gerwig (his star, current g.f. and co-writer), you might suspect that Baumbach’s latest owes more than a tiny debt to Woody Allen’s “Manhattan.” If you also factor in that the film is full of nods to the French New Wave, including an obnoxious overuse of classic scores by Georges Delerue, you might deduce that Baumbach’s reverential hyper-cinephilia has gotten the better of him again. And you would be right. But only to a point.

The truth is, the brittle self-consciousness (half boastful, half embarrassed) signified by his cinematic name-dropping has always been Baumbach’s artistic Achilles heel — his previous films include “Kicking and Screaming,” “The Squid and the Whale” and “Margot at the Wedding” — but thankfully it doesn’t completely undo “Frances Ha.” His collaboration with Gerwig has a freshness that may or not owe something to first-blush romance but that renders this bittersweet comedy occasionally inspired, frequently charming and always watchable.

The film’s shambling story is rooted in a particular passage of life. Frances (Gerwig) at age 27 finds herself in that Janus-like, post-college phase where part of her seems to want to retreat to the womb, or at least Vassar, while another part wants to forge confidently into the realities of grown-up life in New York. For the moment, she’s stuck between the poles, going round and round. As the film opens, she’s trying not very successfully to get some career traction in a dance company, while her closest relationship is with her roommate and best friend Sofie (Mickey Sumner). The two young women act like teenagers, playing all sorts of silly games and saying “I love you” to each other more frequently than people who actually are in love do.

This is the kind of giddy, reality-escaping youthful friendship that seems eternal until (as inevitably happens) one party decides to loosen the ties in order to move on. When Sofie does just that, moving out in order to share a coveted Tribeca apartment with another friend, Frances is left unmoored. For a while she moves in with Lev (Adam Driver) and Benji (Michael Zegen), dry-witted Brooklyn hipsters whose lives seem to consist mainly of wisecracks, beer and hookups. For a few moments it seems like there might be a spark between Frances and Benji, an aspiring "SNL" writer, but that passes and he soon dubs her, in a bit of teasing irony, “undateable.”

In observing these characters’ whimsically wayward lives, their indecision over work and frequent skipping between living situations (their apartments range across Manhattan and Brooklyn), Baumbach captures the current young-NYC-boho milieu with an exactitude that’s almost anthropological and a lyricism that’s both droll and engaging. (As he no doubt could tell you, the combination recalls Godard’s “Masculine/Feminine.”) The pleasing effect here is owed not only to the flavorful, understated precision of the film’s writing and direction, including the poised restraint of Sam Levy’s exemplary b&w lensing, but also to the exceptional work of supporting players Sumner, Driver and Zegen, who all qualify as up-and-coming actors to watch.

It’s partly due to these assets that the film’s first half proves notably stronger than the second. Once Lev and Benji are left behind, and Sofie moves to Japan with her Goldman Sachs sweetie, Frances simply drifts. She goes to Sacramento to visit the folks for Christmas. She trips off to Paris for the weekend, but misses the friend she went to see. She returns to Vassar where she pours wine for visiting bigwigs, a dancer reduced to the status of unpaid servant. As with the film’s earlier segments, these scenes are ably staged and benefit from Gerwig’s smart, appealing performance, but they add nothing either to the story or the character. When Frances is doing nothing but drifting aimlessly, it’s hard to escape the feeling that the film is doing the same — right up to its contrived and hard-to-credit penultimate scene, where the desultory suddenly becomes upbeat.

Ultimately it’s tempting to file “Frances Ha” under “pretty good, but could be a lot better if it tried.” In that sense, it provides an unfortunate correlative for the continuing career trajectory of Baumbach, a perennial underachiever. By any reckoning he owes a lot to privilege: the right upbringing in the right place with the right parents (a cinephile professor and a film critic), the right schools, right connections and right friends, even the right producer (Scott Rudin). Having all of these advantages, however, has not stimulated in him any noticeable drive to demonstrate that his talent surmounts them. Rather, it has left him able to make watchable films, but not challenged to make great ones.

It’s perhaps noteworthy that the archetypal Baumbach protagonist seems to be trying to escape a state of arrested development, one that hints rather unsubtly at autobiographical roots. “The Squid and the Whale,” his most acclaimed and successful film, rehearsed the trauma of his parents’ divorce. His last feature, “Greenberg,” is my favorite of his films, in part because it suggests the start of a way out both tantalizing stasis and the threat of regression. Its main character (memorably played by Ben Stiller) is a failed rock musician who’s been getting nowhere for too long and moves to L.A. in search of a new beginning. However awkwardly, he finds just that. We can only wish the same for Noah Baumbach: a path into a form of filmmaking that is truly his own, rather than being bound by the tastes and limitations of his parents’ cinematic heroes. 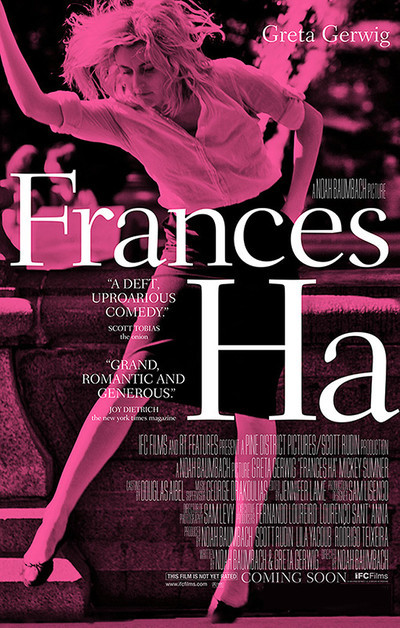