Koichi Takakura (Hidetoshi Nishijima) is a profiler of serial killers, but the opening scene of Kiyoshi Kurosawa’s solid “Creepy” works in reverse in that it profiles our protagonist. As he’s discussing the maniac currently being held in custody, watch his body language and listen to the prideful way in which he talks about his own theories about psychopathology. He’s not sensing the danger. He’s not seeing what’s right in front of him. Until it’s too late. After the horrific incident that follows, Takakura is forced to take a sabbatical, moving to a peaceful, country home with his wife Yasuko (Yuko Takeuchi), but he can’t let that profiler side of him go.

While his wife tries to build a new home for them, Takakura is drawn into a case involving a family who just up and disappeared one night. What happened to them? At the same time, they meet their odd neighbor Nishino (Teruyuki Kagawa), a man who virtually screams CRAZY, but Takakura refuses to judge a book by its cover. Sure, Nishino is strange, but who are they to judge him? Then, one night, the girl from next door jumps through Takakura’s window and tells him that Nishino is not her father. From here, Kurosawa film takes a turn into another genre altogether. I won’t spoil the final act, but there are reasons that many people have described this as a return to form for the director of the J-horror classic “Pulse” and “Cure.”

While more of a procedural than his previous horror classics, one can sense the hand of a genre master on every frame of “Creepy.” Just look at his camera placement, how he delicately moves around a corner in Takakura’s new neighborhood, as if we’re exploring it with these new residents, uncertain of what goes on behind closed doors. While “Creepy” is certainly never boring, it does sometimes feel like it’s taking a bit too long to get where we know it’s going, but that’s part of the point. Everyone watching “Creepy” knows, at least in part, where it’s going except for the cocky profiler at its center. As a character, Yasuko feels a bit underdeveloped, resulting in a late-film character turn that I didn’t quite buy, but every narrative issue in “Creepy” is overwhelmed by the quality of the filmmaking.

Kurosawa knows how to direct a cast too, and he draws a fantastic performance out of Kagawa, a man who teeters on that edge between Horror Movie Bad Guy and Misunderstood Loner. As Takakura continues to give him chance after chance, Nishino does just enough to let us stay a step ahead of the protagonist. Perhaps because he screwed up in the past, Takakura seems too willing to give his neighbor a presumption of sanity. Or perhaps it’s just because Nishino doesn’t meet this overly intellectual investigator’s predetermined concept of what a lunatic is like. They certainly don’t live next to the police.

Of course, this is part of Kuroswa’s theme as well, and arguably the most terrifying aspect of “Creepy.” We’ve seen dozens of stories of the “Maniac Next Door,” but Kurosawa finds new depth in the subgenre, largely due to the realism of his filmmaking and the time he takes to tell his story. There’s not much flash in “Creepy” as the director chooses to ground unimaginable horror by placing it next to a story of an attempt to reclaim domestic bliss. We’ve all had times in our lives where we sought to find ourselves again, to make those we love happy, and get over a trauma. “Creepy” allows us to relate to and like Takakura and Yasuko, and then it drops a bomb, but it doesn’t so through a magic video tape or a haunted camera. It does so through someone right next door. What’s creepier than that? 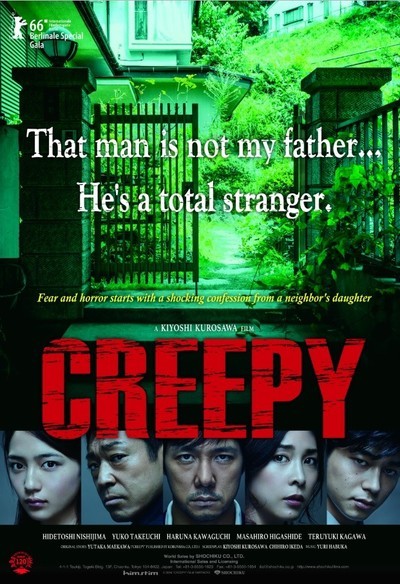