Cannes is a town where just the act of window shopping is an exotic experience. Over the years, many of the old-fashioned, family-owned shops on the town’s main drag have given way to international chains, high-end designer franchises and phone stores. But there remain unique temptations for the non-millionaires to gawk at in more out-of-the-way spots: Candied apricots, as glistening and as expensive as jewels, are displayed in cut-glass crystal bowls in one window. Chocolates in rare shapes and flavors, and with even more rare prices, invite an encounter with the right wallet in another. Gowns and shoes that will never look appropriate anywhere but on the Cannes red carpet wait to be whisked away by some star’s personal assistant.

French director Olivier Assayas (“Clouds of Sils Maria,” “Something in the Air”) scored the competition’s first big bad round of booing with his fizzled thriller “Personal Shopper.” Kristen Stewart (also here in Cannes with Woody Allen’s opening film “Café Society”) plays Maureen, assistant and personal shopper to Kyra (Nora von Waldstätten), a famous fashion model. In that function, she is constantly on the run, selecting gowns, bags and jewelry for her demanding client in the studios of designers in Paris and London.

In “Clouds of Sils Maria,” Stewart was in a supporting role playing a personal assistant to a star, and Assayas revisits that concept in “Personal Shopper,” but with a story centered on her character. Stewart is a straightforward, almost awkward actress, who doesn’t appear to have many shades of subtlety for a director to exploit, which makes her an especially bad fit for this role.

Whatever Stewart’s shortcomings, writer/director Assayas is the guy who has to stand up and take a bow for this bomb. It’s a thriller that includes a big, spooky mansion; a ghost story featuring more than one of those in the flesh (or, in the ectoplasm, I should say). It’s a horror/murder mystery with a glimpse of gore and red herrings galore. It’s a fashionista’s wet dream, with Stewart stripping down to her teensy black panties to model fetish booties and some high-powered haute couture.

In her private life, Maureen is mourning the sudden death of her twin brother from a heart defect that she also shares. Brother Lewis was a medium and a spiritualist, who promised his sister that he would give her a sign after his death. Having received nothing, she hopes to summon his presence by spending the night in a sprawling old mansion where he had lived.

In standard horror movie style, Assayas has the heroine fearlessly poke around a maze of rooms in the dark as tension builds and every shadow looks sinister. There’s a jump-out-of-your-seat moment when something appears with ghostly puke spewing out of its mouth. Like many a horror movie, the suggestion is far more interesting than the actual manifestation.

From that moment on, Maureen begins to get text messages from an unknown person (or thing?) on her cell phone.  The narrative of the entire middle section of the film is driven by shots of text messages, while Maureen rides the Chunnel train to London, runs fashion errands for her employer, and takes the train back to Paris. This unknown text buddy, assumed by Maureen to be the ghost, uncannily knows her every movement and location. He/she/it proposes a game that will involve her acting on a forbidden desire. It gets wilder and wilder, but hardly any of it adds up. 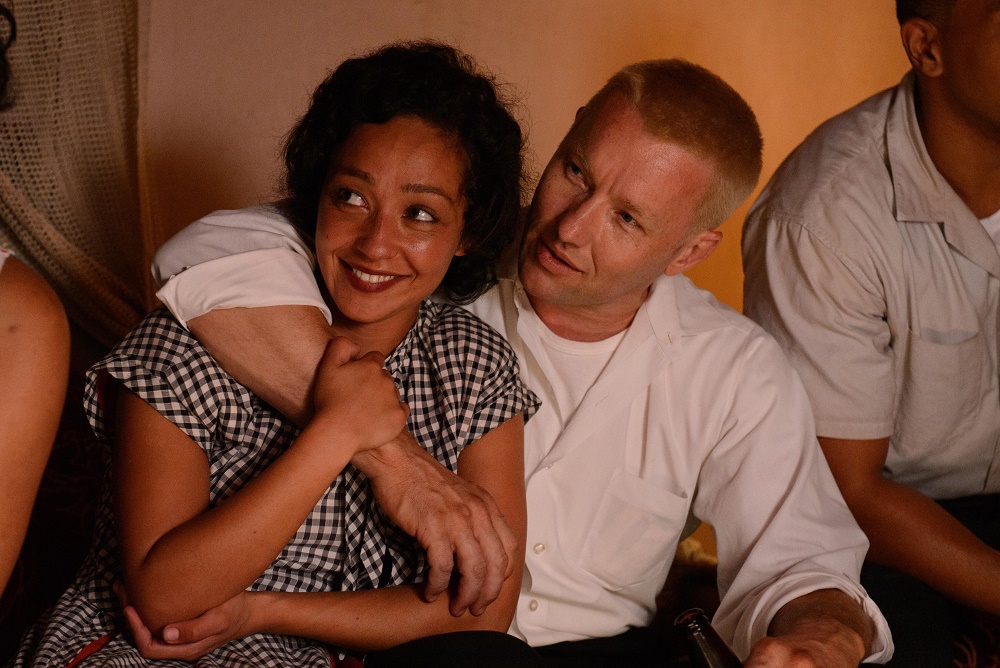 Also premiering in competition, “Loving” by Jeff Nichols (“Midnight Special,” “Mud”) presents a fictionalized account of the story of Richard Loving and Mildred Jeter, the interracial Virginia couple who married in 1958, and, after a nine-year struggle, brought their legal battle against the state’s anti-miscegenation laws all the way to the Supreme Court in 1967. It’s a well-crafted historical drama that pays minute attention to recreating the period and the couple’s personal history, with much dialogue and legal particulars based on documented fact.

The choice of this particular history at this time is clearly calculated to resonate with present day audiences, given that the Loving v. Virginia case has been cited as a legal precedent in current battles for marriage equality. “Loving” is at its best when relying on the performances of Joel Edgerton (“Midnight Special,” “The Great Gatsby”) as Richard, a reticent small-town construction worker, and Ethiopian-born actress Ruth Negga as wide-eyed soft-spoken Mildred, to maintain the film’s low-key illustration of courage through endurance.

Disappointing is Nichols’ tendency to follow many of the usual patterns for this sort of historical drama, in which the triumphant outcome is already known. Early on, the script plays it straight, as seen in threats that come in the form of encounters with racist cops after the Lovings are arrested in their bedroom in the middle of the night, and from the judge who presents them with a choice between state prison and a 25-year banishment from the state of Virginia.

As the couple and their three children live hand-to-mouth in exile in Washington, D.C., determined Mildred writes a letter to Attorney General Robert Kennedy, who passes it on to the ACLU. The strategy of the legal challenge gets rolling, and “Loving” very noticeably shifts in tone, to coast on the aura of victory in a time-tested method more typical of a made-for-TV movie.

A smug, self-congratulatory tone takes hold, extending to the droll characterizations of ACLU lawyers Bernie Cohen (Nick Kroll) and Phil Hirschkop (Jon Bass), and to the humor and bemusement prevailing in sequences including the encounter of Life magazine photographer Grey Villet (Michael Shannon) with the Loving family. There is the clichéd low-angle shot of the Supreme Court building, sparkling white in the sunlight, and a solemn shot of the two white lawyers stopping to exchange a meaningful glance before they ascend the steps to make history.

This film could have done without parallel editing tricks to underline the obvious; “Loving” is not a courtroom drama. To its credit, the film keeps the emphasis on the couple to the end, as they calmly continue their daily life while the far-reaching decision regarding the legality of their marriage is being made.