Something in the Air

The French title of "Something in the Air," Olivier Assayas' semi-autobiographical coming of age film, is "Apre mai," which translates into English as "After May." And everyone, or at least everyone of a certain age, knows that "May" means one thing in French: May 1968. "Bliss was it in that dawn to be alive," wrote Wordsworth of an earlier revolution in France, "But to be young was very heaven!"

If that isn't an actual on-screen epigraph in Assayas' movie, it's an implicit one. "Something in the Air" is suffused with its auteur's nostalgia for a galvanizing moment in his adolescence that coincided with a tumultuous and transformative period in modern French history: student protests, demonstrations, riots, police brutality, workers occupying factories, students occupying universities, culminating in a general strike that shut down the nation's economy and government. Those were the days!

Nostalgia, of course, is associated with a longing for lost innocence, an ache for that quintessentially youthful optimism that views the world as open to endless possibility. The movie is populated with fresh-faced would-be high school revolutionaries whose precociousness is mingled with a comically endearing naïveté. These kids are poised on the cusp of "real life," facing a dizzying array of new experiences they want to try out. While earnest and serious, they're not sullen -- though they hardly ever laugh, which is mildly disconcerting in such fresh-faced youngsters.

With so many issues of life-and-death importance swirling around them, nobody has time to waste on polite chit-chat about trivialities like the stock market or sports teams. Conversations, seething and roiling with passion and conviction, invariably turn into fervent debates about the only things that matter: politics, art, philosophy, sex, love and friendship. Those subjects are the very molecules of the air these kids breathe, the wine they drink, the nourishment that feeds their developing bodies and minds. From the perspective of 2013, it all seems somewhat quaint — foolhardy but also rather noble.

What story there is in "Something in the Air" follows would-be painter and filmmaker Gilles (Clément Métayer) as he wanders impulsively after romance, adventure, artistic ambitions and revolutionary politics, from the suburbs of Paris to Italy and back again, during the summer of 1971. The first time we see him he's carving an anarchy symbol into his wooden school desk with the sharp end of a compass. Right away we know he's an artist of sorts, whose interests extend to graffiti, propaganda posters, political leaflets and personal watercolors he allows few people to see.

Assayas looks back on the values and priorities of the time with a vision that's both wry and tender. When Gilles asks a member of a radical collective if he can borrow their 16mm camera to make a short film, he's told: "We do agit-prop. Usually we don't lend for fiction." It's a line that crystallizes the tension between aesthetics and politics underlying almost every interaction.

In Florence, Gilles and a girlfriend come upon an outdoor screening of a documentary about Laos produced by "the Hedgehog collective." The post-screening Q&A is priceless, as the usual self-congratulatory audience remarks are upstaged by challenges to the filmmakers' ideological purity.

A viewer criticizes their film for adhering to the "classical style" of the bourgeoisie: "Shouldn't revolutionary cinema employ revolutionary syntax?" But, counters one of the filmmakers, "Such a style would be a shock to the proletariat. Our role is to enlighten them." And what if this so-called "revolutionary syntax" was actually a manifestation of the "individualistic style of the petit bourgeoisie"? After all, "style" itself is for esthetes: "You can't make entertainment in revolutionary times."

It's almost like having a critic providing a running commentary track from within the movie. Of course, Gilles is a stand-in for Assayas, who is a former film critic, so there's a wholeness to the movie's conception, a sense that his sensibility is shining through in every frame — though compared to the operatic fever-dream of Bernardo Bertolucci's daring, transgressive, NC-17-rated "The Dreamers" (2003), it's pretty tepid stuff. Still, it has its own undeniable, understated charm.

The movie does meander, however, and there are times when I wondered if the American title, "Something in the Air," referred to Eric Gautier's camera, which glides incessantly through the treetops in so many nearly-identical crane shots that it almost becomes a running gag. Yes, the movie is lovely to look at, but I couldn't help but think of an old Elvis Costello album title: "All This Useless Beauty." (Talk about the individualistic style of the petit bourgeoisie!)

As in Assayas's 1994 "Cold Water," to which this film is an unofficial companion piece, most of the actors are non-professionals, which perhaps contributes to the air of emotional opacity that makes them seem so unformed, incomplete. The film is about the process of becoming — not so much discovering one's destiny as finding an identity that fits. Fans of Assayas's "Cold Water" and "Summer Hours" will appreciate the fluid camerawork that snakes from room to room in some of the most seductive adolescent party scenes every committed to film.

In the end, the pursuit of high-minded ideals can't help but lead to disappointment. Callow as Gilles is, he's established early on as a rebel among rebels when he buys a copy of Simon Leys' "The Chairman's New Clothes." The Cultural Revolution is in full swing, but the book's author says the whole thing is a sham, while some of Gilles' traveling companions say it was actually written by a covert CIA operative as part of a plot to discredit Mao. I couldn't help but feel sorry for them; they want to believe in a better system, but they are doomed to suffer betrayal and disappointment, like the naïve American Communists before them who believed in Stalin's utopian society.

As summer turns to fall, Gilles finds his attentions drifting away from politics and back to school. It's "After May," after all, and late in the season the revolution cools along with the weather. What begins in white-hot fervor — molotov cocktails against injustice — settles into into more practical career-oriented ambitions. Dreams are deferred to accommodate unanticipated realities. Things change. Gilles finds work as a production assistant on a science-fiction exploitation movie "with prehistoric monsters and Nazis, I think." Perhaps he's discovered the perfect fusion of art and politics. 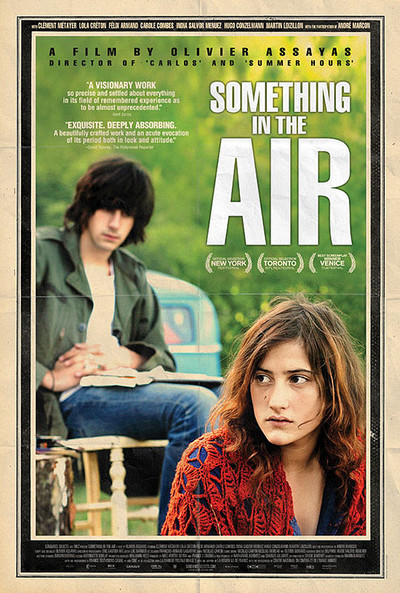