Audience response at the conclusion of press premieres in the Cannes Festival Palais can be a tricky phenomenon to interpret. There is polite applause, and there is the dead silence of no applause; there is booing and hooting, and there is prolonged rhythmic clapping. There can be any contradictory combination of these, as at this morning’s screening of Paolo Sorrentino’s “Youth.”

With his 2013 “The Great Beauty,” Sorrentino was considered a front-runner for the Palme d’Or by press at Cannes. He didn’t win, but got the consolation prize of an Oscar a few months later. His 2008 “Il Divo” got the Cannes Jury Prize and an Oscar nomination. I had loved “The Great Beauty,” and was greatly looking forward to “Youth,” a film in English with a provocative-sounding cast headlined by Michael Caine, Harvey Keitel, Rachel Weisz, Paul Dano, and Jane Fonda. Now, having seen it, I have to admit that I’m on both sides of this morning’s reactive audience; with both the clappers and the booers.

If “The Great Beauty” was Sorrentino’s take on Fellini’s “La Dolce Vita,” “Youth” is his tip of the hat to "8 1/2."  The director’s only forty-five, but this is an old man’s movie, centered on the late-life reflections and epiphanies of two longtime friends, retired orchestral composer and conductor Fred Ballinger (Caine) and American film director Mick Boyle (Keitel), who is in production on a new film. They are in residence at a Swiss resort hotel, where other guests include a disillusioned movie star (Dano), Fred’s newly heartbroken daughter and personal assistant Lena (Weisz), and assorted characters including an enormously fat man with a life-sized portrait of Karl Marx tattooed on his back.

Sorrentino packs the film with entrancing images. Fred’s dream sequence in which he walks across a flooded Piazza San Marco in Venice, crossing paths with a statuesque woman in a spangled bikini, is brief but it’s pure magic. Magic of another sort is inherent in a swimming pool scene in which Fred and Mick are seen apparently spellbound by the memory of more youthful longing as they watch the same beautiful woman, a reigning Miss Universe staying at the hotel, slowly walk naked into the pool.

At another point, Fred fantasizes a symphony in a pasture, gently directing the lowing of cows and the sounds of cowbells and birds. In the film’s most Felliniesque scene, Mick faces a hillside on which dozens of costumed actresses are posed, each enacting a scene from a famous film.

There are farcical subplots galore. The Queen of England sends an emissary who attempts to induce Fred to commit to a command performance. Lena has been abandoned by her husband, Mick’s son, for a trashy pop star. Fred and Mick spend their time together arguing over past romantic rivalries and puzzling out the drawbacks of progressing age. Mick and his crew of collaborators, a motley bunch of crass young Hollywood types, brainstorm possible endings for the uncompleted script, and Mick awaits the arrival of Brenda (Jane Fonda), his aging blonde ball-buster of a star.

Caine gives a flawless performance, and I can tell from overheard reactions here that many loved Keitel and the combination of Caine and Keitel. The combo didn’t work for me. Keitel’s Mick struck me as a character from another movie, too gritty and blunt to mesh with Caine’s suave and thoughtful Fred. The script emphasized the soul-searching that comes with memory as Fred is forced to confront the less admirable side of his past through his daughter’s recriminations as they lie side by side on massage tables, and though his own uneasy recollections of his marriage.

The script is peppered with copious pop philosophy, in dialogue that comes off as raw in its unlovely English-language clumsiness. Mick has one of his young crew members look through both ends of a telescope to receive the wisdom: “When you’re young, everything seems really close: that’s the future. When you’re old, everything seems really far away: that’s the past.” Much of the dialogue is arch and full of movie world insider references, like when Fonda’s Brenda delivers a bitchy monologue on Hollywood, along the lines of “Life goes on, even without all that cinema bullshit.” 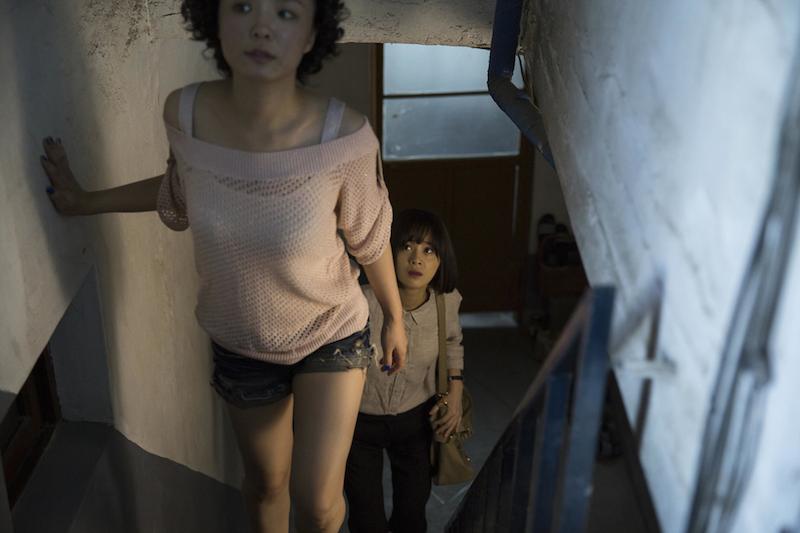 On to the Un Certain Regard section of the festival, where “Madonna” by South Korea’s Shin Su-won was full of mixed messages. Director Shin holds her cards close to her chest regarding the film’s real story for the first half-hour or so. There’s the faintest false hint that the plot may go in a horror direction when new nurse’s aid Hye-rim, blank-faced and passive, begins work at a luxurious private hospital. The institution’s board chairman has lain in a vegetative state for ten years, his care overseen by a sinister son, who has kept him alive with repeated organ transplants.

An unidentified brain-dead prostitute is brought in, and is designated as the donor for the chairman’s next heart transplant. Hye-rim is apparently the only one who recognizes that she is massively pregnant. Ordered by the sinister son to track down a relative who will sign the release for the organ donation, Hye-rim begins to reconstruct the past of the young woman, a chubby, simple-minded misfit who has been bullied, wronged and unloved for much of her life.

“Madonna” is a film in which women are treated badly and sexually abused, most often ending up on their knees before cruel and manipulative men. I kept waiting for Shin’s script to reveal a larger purpose, a comeuppance to the sexism, or some form of hope, but despite the sappy sentiments of the ending, the birth of a female child only suggests something less than redemption. 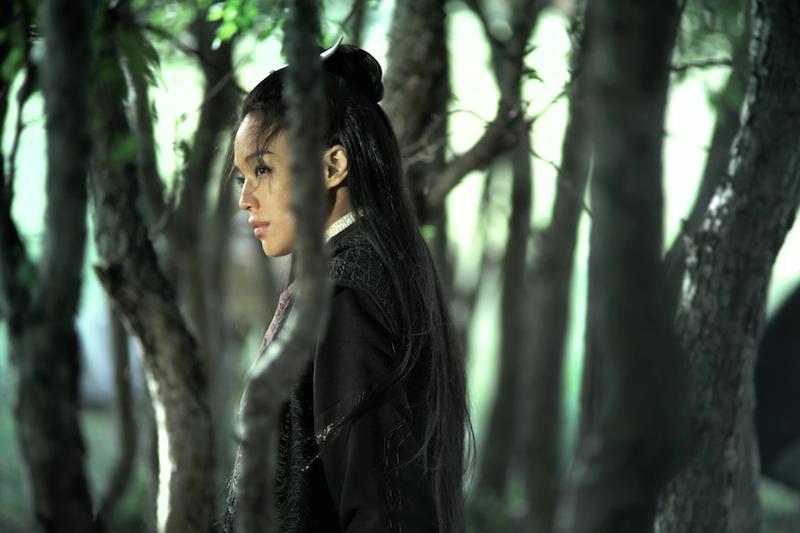 Long anticipated, “The Assassin,” Hou Hsiao-hsien’s first film in eight years, had been speculated to involve a significant stylistic change for the Taiwanese master, who made his international reputation on films including “A City of Sadness” and “The Puppetmaster.” If anything, it’s a return to form following the more atypical “Flight of the Red Balloon," which Hou shot in Paris. Nominally a martial arts film of the swordplay genre, “The Assassin,” inspired by 9th-century Tang Dynasty fiction, is actually a breathtakingly contemplative historical drama.

Filmmakers including Zhang Yimou, Ang Lee, and Bernardo Bertolucci can eat their hearts out, because “The Assassin” involves the most extravagant, intricately detailed, extraordinarily beautiful recreation of the interiors, décor, dress and manners of imperial China that has ever likely been put on film. The mesmerizing stillness of Hou’s method rewards the viewer with a wealth of imagery to absorb. Time stands still, and frankly, who would want to rush it as the minute protocol of preparing a royal lady’s bath is observed, or an ant makes its progress across the petals of a perfect white peony?

This is a martial arts film only in the sense that there are several confrontations involving swordplay. With the exception of a minor use of slow motion, these scenes are filmed in real time and are set within the human limits of actual martial arts practice. There is no high-flying wirework, no superhuman feats of strength and duration; no big action set pieces.

Yinniang (Shu Qi of Hou’s “Millennium Mambo”), a general’s daughter exiled since childhood, is assigned by her martial arts master to kill the cousin to whom she was once betrothed, as punishment for failing to complete the political assassination of a corrupt governor. This is played out as an intricate cat-and-mouse game of stalking, and its pleasures for the viewer are not the ordinary ones of pursuit and capture, but the quality of living completely in each moment through Hou’s vision.

In his trademark style, Hou tells the story in medium and long shots, with only a rare medium close-up. Interiors are designed to reveal layer upon layer of depth through the use of filmy curtains, tapestries, rooms that look into other rooms, and open up beyond to a glimpse of exterior landscape. His landscapes have the look of Chinese brush paintings, and are layered horizontally in the frame, with strip of sky, jagged mountains, ethereal banks of mist, and muted striations of turf.

This is Hou Hsio-hsien’s eighth trip to Cannes, and his seventh time with a film in competition. He won the Jury Prize for “Puppetmaster” in 1993, but has otherwise gone home empty-handed despite the enormous cult status that his work enjoys with cineastes and critics. Maybe this will be the year.