Regarding R.W. Fassbinder: Letter to a Young Cinephile

You’ve heard me call Rainer Werner Fassbinder the most important film director of the last half-century, and you’re not inclined to disagree or argue so much as you feel he’s still a bit beyond your ken. Like other dedicated, largely self-educated young cinephiles, you’ve done your due diligence on a host of great filmmakers, from Chaplin and Renoir to Godard, Mizoguchi and Kiarostami, learned enough about them and seen enough of their key works to form your own opinion. Fassbinder, though, remains a dark continent looming on the horizon, intriguing but largely "incognito," as the old maps say.

On the occasion of Lincoln Center’s series "Fassbinder: Romantic Anarchist" (Part 1, covering the first half of his career, runs May 16-June; its successor arrives in November), then, let me offer a few thoughts that I hope will provide some basic orientation. The German auteur remains obscure to many cinephiles, especially younger ones like yourself, partially due to the staggering immensity of his output, doubly remarkable given the relative brevity of his life.

Born in 1945, when much of Germany lay in ruins, Fassbinder grew up during the so-called Economic Miracle of the ‘50s and was active in two Munich theater troupes during the mid-to-late ‘60s. From 1969 until his death in 1982, he turned out 43 full-length movie or TV productions, in addition to 14 plays and sundry other works. On all of his films, he served as writer, director and (usually) editor, and sometimes also as actor, production designer and cinematographer. In addition, he starred in other directors’ film. All of which adds up to a body of work so huge it is indeed challenging to approach. 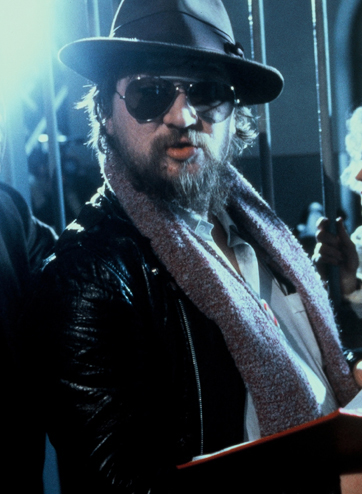 For those of my generation, there was the advantage of seeing it unfold as it happened, and thus catching both the logic and the drama of how one film led (often with amazing rapidity) to the next. Inaugurated at the end of the ‘60s, the New German Cinema—centered on the triumvirate of Fassbinder, Werner Herzog and Wim Wenders—was at the peak of its international influence between the mid-70s and Fassbinder’s death in 1982. Since I began reviewing films in 1978, these movies comprised easily the most exciting and revelatory area of world cinema during my first half-decade as a critic.

Fassbinder was a larger-than-life impresario and art-world celebrity, swaggering in black leather-jacketed bravado, trailing tales of substance abuse, sexual shenanigans and political deviation. It seemed an entire film industry in Germany was fueled by his volcanic personal energy. When he died, suddenly but not too surprisingly at age 37, it wasn’t just that the films stopped; it was like the whole circus tent collapsed.

Yet I don’t mean to suggest that Fassbinder’s obscurity to many younger viewers today can be wholly explained by the oeuvre’s daunting size or the absence of his personality. There’s something else, which I’ll approach via a musical analogy in the form of a question: Why aren’t the Sex Pistols played on rock radio?

In a sense, Fassbinder was international cinema’s closest equivalent to punk rock, which reached its peak during the same years that his career did. In the previous decades, Europe’s art cinemas (French, Italian, Swedish, Polish, etc.) had developed in the direction of refined aestheticism and intellectuality. Fassbinder’s cinema initially came as a shock because it was just the opposite: rude, raw and aggressively non-pretty. Its settings were seedy, its characters low-lifes, its actors often plug-ugly (except when they were beautiful). Yet this was just the starting point. As he rocketed forward, it was if Sid Vicious morphed into Beethoven. And observing that protean growth remains a key part of his artistic fascination, even decades later.

Fassbinder's career can be divided into three periods. The first, the gangster period, lasted a mere two years (1969-70), yet staggeringly produced ten feature films, a rate of output virtually unknown since the silent era. Like Jean-Luc Godard and Andy Warhol (the two filmmakers Fassbinder most reminds me of), he commenced his career in a way that seemd to reinvent cinema from nothing. Made fast and cheap, his early films are exuberantly mannered, insolent and constantly audacious. Emerging from his work with Munich’s Antitheater, they featured that troupe’s actors in what became an ongoing stock company for Fassbinder, who ruled it like a jealous, manipulative paterfamilias. 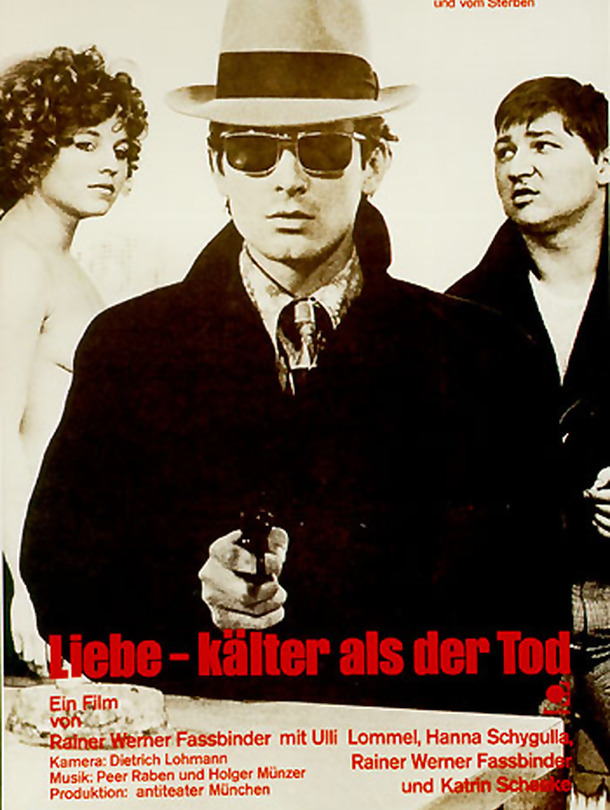 The most notable films of this period include "Love Is Colder Than Death," "Katzelmacher," "Why Does Herr R Run Amok?," "Whity," "The American Soldier" and "Beware of a Holy Whore." The latter film, which records the disastrous infighting of a film company shooting on a foreign location, fictionalizes the making of "Whity" and marks the symbolic end of Fassbinder’s first period, which, in being so bound to the theatrical avant-garde, he came to see as an "onanistic" dead-end.

The subsequent melodrama period (1971-1977) began with Fassbinder’s discovery of Douglas Sirk, a European filmmaker who, in his view, went to Hollywood and was able to pack some sharp social criticism into glossy melodramas such as "Magnificent Obsession" and "All That Heaven Allows." However accurate this view of Sirk was, it suggested to Fassbinder a way he could go from addressing an artistic fringe to making films for (and about) the broader German public. Repurposing melodrama, the movies that followed dealt more directly with social inequities and tensions, and, while remaining highly mannered, became more polished and stylistically expansive.

The film that launched this period, "The Merchant of Four Seasons," about a vegetable vendor’s spiral toward suicide, remains one of Fassbinder’s powerful and provocative works. Newly restored, it will run throughout Part 1 of the Fassbinder series, which also includes such notable second-period titles as "Ali: Fear Eats the Soul," "The Bitter Tears of Petra von Kant," "Martha," "Effi Briest" and the ingenious, three-hour, made-for-TV sci-fi fable "World on a Wire." ("Fox and His Friends" and other celebrated second-period films will appear in Part 2 of the series.) 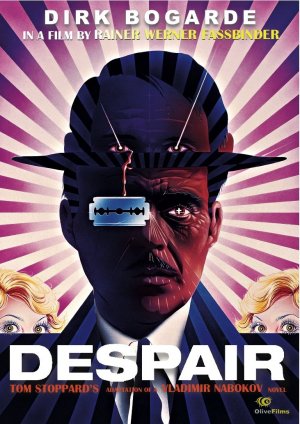 By the time of Fassbinder’s third, or international, period, he was a major world auteur and his later films reflect the opportunities this afforded. Yet even in his first English-language feature, the underrated "Despair" (starring Dirk Bogarde and scripted by Tom Stoppard from Nabokov’s novel), the focus remained on Germany, this time during the rise of the Nazis. And while he continued to use melodrama to X-ray German society, this period also yielded the acclaimed "BRD Trilogy" of "The Marriage of Maria Braun," "Lola" and "Veronika Voss," which traced the trajectory of Germany from the end of the Third Reich through the Economic Miracle. (Fassbinder envisioned these films as the cornerstone of a nine-part "moral history of modern Germany" that was left incomplete at his death.)

The third period also produced the bittersweet World War II musical drama "Lili Marleen" and the magisterial, 15-hour "Berlin Alexanderplatz," an adaptation of Alfred Doblin’s "Ulysses"-like novel that was made for German TV but often shown internationally as a gargantuan theatrical feature. As grandly ambitious and history-focused as much in this period was, it also contained smaller, more personal films, such as the wrenchingly confessional "In a Year of 13 Moons" and the scathing political broadside "The Third Generation." And it ended with the hermetic homoeroticism of "Querelle," a funereal fantasia derived from the novel by Jean Genet.

In surveying all three of these periods, the amount of artistic development they entail is striking, but so is their essential consistency. Fassbinder’s great theme was exploitation: emotional, economic and otherwise. In his stories—whether gangster, melodrama, historical or literary—characters are typically caught in conflicted situations that become intolerable and from which there is often no escape short of death. The situations force people to exploit others to get what they need (if only a dream of escape), and while Fasbinder’s sympathies are generally with the weaker, more victimized parties, it’s clear that everyone is caught in the same net of betrayals and double binds.

In watching how these situations play out in different films, it’s inevitable to reflect that they contain both subjective and objective facets. For most of the characters, there’s some internal flaw or misperception that drives them toward disaster, or at least unhappiness. And this touches on the psychological core of Fassbinder himself. Reading Doblin’s novel "Alexanderplatz Berlin" at age 15, he recalled later, at a certain point "I wasn't reading anymore, but rather, living, suffering, suffering, despairing, fearing." Why? Because he discerned in the relationship between the book's protagonist, Franz, and his nemesis, Reinhold, the story of two men whose lives are destroyed because "they never...recognize...that they desire one another in an usual way." The book, he said, helped him with the fraught task of coming to terms with his own homosexuality.

The odd thing being that there’s virtually no evidence of sexual attraction between the two men in Doblin’s novel. It’s something that Fassbinder brought to the book, not vice versa. But it proved a durable template. The motif of two men who "desire one another in an unusual way" is there in his first feature, "Love Is Colder Than Death" (in which Fassbinder plays a criminal named Franz), and it recurs often thereafter. 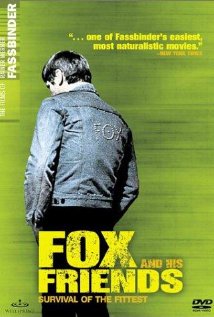 In one sense, the personal led to and undergirded the political for Fassbinder, but not always in the ways one would expect. The two melodramas focused on gay characters in his second period, "Fox and His Friends" (in which Fassbinder plays a working-class gay guy who wins a lottery that makes him a target of more well-heeled types) and "The Bitter Tears of Petra von Kant" (a tale of lesbian betrayals), depict gays as every bit as exploitive as their straight counterparts, and both films duly drew protests from gay political groups.

Yet it certainly can’t be claimed that the woes afflicting most Fassbinder characters are entirely, or even largely, subjective in nature. One of the central ideas in his work (often hinted at in religious imagery, interestingly enough) is that the insanity that gripped Germany in the Nazi era was not expunged with the destruction of the Third Reich, but rather survived and took new forms in the post-war era, when West Germany was dazzled and distracted by its economic rebirth. During this time, the old evils were there more discreetly, but still evident in various forms of hatred, suspicion, bigotry and intolerance, including that directed at foreign "guest workers."

My favorite of all Fassbinder films, "Ali: Fear Eats the Soul" may not have the grandeur and historical scope of the third-period movies. Yet it perfectly distills both the emotional essence and the social vision of his work. Modeled on Sirk’s "All That Heaven Allows," it tells of a plain, widowed charwoman (beautifully played by Brigitte Mira) who meets a strong and much younger Moroccan laborer (excellent El Hedi Ben Salem) and offers him simple kindness and companionship. He responds appreciatively and a love haltingly develops. But it’s one that runs into prejudice at every turn (the couple’s backbiting "friends" and neighbors are often seen in imposing theatrical tableaux in a local bar) and that eventually cannot sustain itself against such overwhelming and insidious opposition. 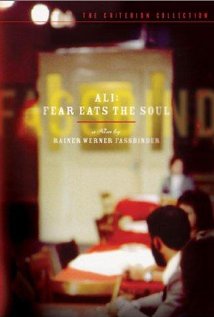 In this, we see the outward and the inward, the social and the psychological, inextricably joined, and put in the context of a style that allows actors to summon profound emotional truths even while framed by theatrical artifice. This alchemy gets at the unique genius of Fassbinder as evoked by this series’ title. A romantic he surely was, in wanting to free the heart of its shackles, especially those that are self-imposed. And an anarchist too, if only for yearning to spur Germany toward a new beginning that would be genuine and radical rather than delusional and self-excusing.

Note: In addition to films by Fassbinder films, the Lincoln Center series includes films that influenced him, such as Sirk’s "All That Heaven Allows," and others influenced by him including Todd Haynes’ "Far from Heaven" and Francois Ozon’s "Water Falls on Burning Rocks."