The late Rainer Werner Fassbinder was not the kind of young European director who scorned the glitter of Hollywood. He was raised on American movies, one a day during his adolescence, and he once said that his dream was to make a film as beautiful as a great Hollywood movie of the 1930s, embodying his personal vision.

The earlier works in his astonishing output of some 40 films were made on budgets too small to support that kind of vision. But in the last few years of his life, he several times had the budgets and the casts to make movies that looked and felt as elaborate as pre-war Hollywood studio productions. The titles included his "German trilogy" of “The Marriage of Maria Braun,” “Lois” and “Veronika Voss,” also “Lili Marleen.”

This is a film laden with irony. It stars Hanna Schygulla, who became an international star by appearing in the big-budget “Maria Braun.” That role was about a woman who tried single-handedly to recreate herself in a successful image; her life paralleled the postwar "German economic miracle." Now in “Lili Marleen” here is another woman, named Willie, whose public life parallels the rise and fall of Nazism.

The movie opens in 1938, late for a well-informed German to be naive about the Nazi party, but Willie doesn't seem very tuned in. She sings in a cabaret, she falls in love with Giancarlo Giannini, and she learns that Giannini is a leader in the anti-Nazi underground.

She supports him, sort of, without ever really placing her own life on the line. In Germany, she records a version of "Lili Marleen," which is played on the radio and becomes the song of the moment. She is identified with the song, with Nazism, and with the war effort, and becomes a national heroine while at the same time reserving her private life for the resistance hero. She seems able to reconcile public and private codes that are diametrically opposed.

The movie intercuts the Nazi investigation of Giannini's activities with interminable reprises of Schygulla singing "Lili Marleen," until there is an ironic appropriateness when Fassbinder devises a new Nazi instrument of torture: a brief bit from the record of "Lili Marleen," played over and over again at a helpless prisoner, a sort of Chinese water torture of the ears.

“Lili Marleen” is not one of Fassbinder's great films. But it has a wicked sense of humor, displayed in Fassbinder's two favorite opposites, understatement and hyperbole. His characters take the most amazing things quietly in stride, and then get hysterical over trifles; their little ambitions and intrigues obsess them while, half-noticed in the background, civilization crumbles underneath the lamplight. 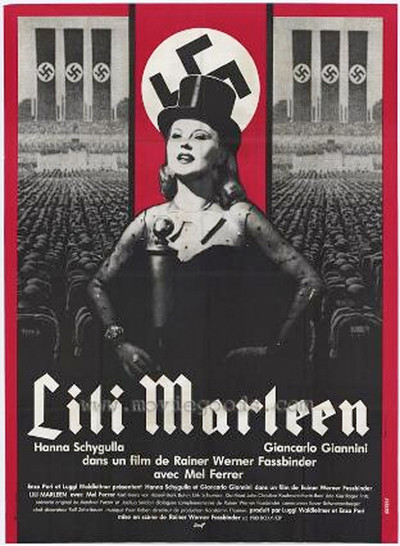