The first shots set up the theme: them against us. An older woman, dumpy and plain, walks into an unfamiliar bar and takes a seat at the table inside the door. The barmaid, an insolent blond in a low-cut dress, strolls over. The woman says she will have a Coke. At the bar, a group of customers turns to stare at her, and the camera exaggerates the distance between them. Back at the bar, the blond tauntingly dares one of her customers to ask the woman to dance. He does. And now the camera groups the man and woman together on the dingy dance floor, while the others stare.

“Ali: Fear Eats the Soul” (1974) tells the story of these two people. Emmi Kurowski (Brigitte Mira) is about 60, a widow who works two shifts as a building cleaner, and whose children avoid her. Ali (El Hedi ben Salem) is about 40, a garage mechanic from Morocco, who lives in a room with five other Arabs and describes his life simply: “Always work, always drunk.” Ali is not even his real name; it’s a generic name for dark-skinned foreign workers in Germany.

Rainer Werner Fassbinder told their story in a brief film that he dashed off in 15 days in 1974, between the big-budget productions “Martha” and “Effi Briest.” He shot it on a shoestring. Mira was a little-known supporting player, and Salem, then Fassbinder’s lover, had played only bit parts. The story was inspired by “All That Heaven Allows,” the 1955 Douglas Sirk film starring Jane Wyman as an older woman who falls in love with her young gardener (Rock Hudson).

Fassbinder said he made the film just to fill the time between bigger pictures, but “Ali” may be the best of his 40 or so films; it certainly belongs on the short list with “The Marriage of Maria Braun” and “Merchant of the Four Seasons.”

The film is powerful but very simple. It is based on a melodrama, but Fassbinder leaves out all of the highs and lows, and keeps only the quiet desperation in the middle. The two characters are separated by race and age, but they have one valuable thing in common: They like one another, and care for one another, in a world that otherwise seems coldly indifferent. When Emmi shyly confesses she is a building cleaner, she says many people look down on her for that. Ali, whose German is limited, expresses his position more directly: “German master, Arab dog.”

Fassbinder often made films about characters cynically exploiting one another through sexuality. In “Ali,” there is a startling tenderness. The tall, bearded Moroccan offers to walk the cleaning woman home. It is raining, so she invites him in for coffee. He has a long tram journey to the district where he lives. She asks him to spend the night. He cannot sleep, and wants to talk. She tells him to sit on her bed. As often as I’ve seen the film, I’ve never quite noticed the precise moment when he takes her hand and begins to caress her arm.

Of course she studies herself in the mirror the next morning. She knows she is old and lined. We see something of the world she lives in, and hear the casual racist conversations of her fellow cleaners, who talk about how filthy the foreign workers are. Emmi’s defense is indirect: “But they work! That’s what they’re here for.” True. Germans don’t like their foreign workers but don’t want to collect their own garbage or dig their own ditches.

Emmi and Ali, simply by being together, offend everyone who sees them. Fassbinder provides scenes in which Emmi’s neighbors gossip spitefully; the grocer across the street is deliberately rude to Ali; a waiter is aloof in a restaurant (“Hitler’s favorite restaurant!” Emmi tells Ali), and guests in a cafe mock them. The most unforgettable scene comes when Emmi informs her children that she has gotten married. Using a zoom lens to flatten the shot, as if its subjects are sandwiched between microscope slides, Fassbinder pans across the faces of her two sons, her daughter and her son-in-law (played by himself). Then her son Bruno whirls around in his chair, stands up and kicks in the screen of her TV set.

The movie’s best scenes are the more subtle ones that follow. Ali and Emmi are content when they’re alone with each other, but they live in a toxic society. Soon Emmi is ganging up with her fellow workers to exclude the new cleaner, a woman from Yugoslavia. Soon her disapproving neighbors are happy to have Emmi’s strong new husband help them shift furniture. Soon the co-workers are admiring Ali, and Emmi is letting them feel his muscles. Soon Ali is back in the bar with his “Arab mates,” and upstairs with the buxom blond -- not for sex, but because she knows how to make couscous.

Fassbinder was himself an outsider. His father died when he was young, his mother used the movie theater as a baby-sitter, he was gay when that was not acceptable, he was short and unattractive. It is not much of a stretch to see “Ali: Fear Eats the Soul” as the story of his own love affair with the tall, handsome El Hedi ben Salem. And it’s not difficult to see self-criticism in the way he has Emmi unthinkingly reflect her society’s prejudices against foreigners.

But the movie cuts its politics with irony. Emmi Kurowski’s first husband was a Polish worker in Germany; when they see her with a Moroccan, the neighbors sniff, “She’s not a real German with that name.” The grocer and his daughter snub Ali, but soon realize they need the business, and flatter Emmi to get her back in the store. Bruno, the son, sends a check for the smashed TV set and turns up to ask his mother to baby-sit every afternoon. And Ali’s infidelity with the barmaid is more sad than passionate: He is homesick for couscous, and she cooks it for him, but when they go to bed together he lies unmoving, exhausted, and she simply comforts him.

The phrase “fear eats the soul” is one that Arabs often use, Ali tells Emmi. Certainly it is eating his soul. The film’s ending, as sudden and melodramatic as life can be, is a reflection of the unendurable tension Ali experiences as a stranger in a hostile land. But Emmi is able to suggest a solution: “When we’re together, we must be nice to one another.”

There are times when Fassbinder uses deliberately mannered visuals to make a point. He often separates Emmi and Ali from the rest of society with alternating long shots: First they are distant, then those who watch them are distant. He crowds them into close two-shots in claustrophobic little rooms. He makes use of the Moroccan’s natural stiffness before the camera. When Emmi comes into the bar toward the end and requests “that gypsy song” she and Ali first danced to, the song acts as Ali’s cue, and he stands, walks toward her and asks her to dance as if he were a robot triggered by the song. Would it be better if he were more natural? No, because Fassbinder’s style throughout the movie is one in which movements and decisions are dictated to his characters by the world they live in.

At the very end of the film, there’s dialogue about the condition of foreign workers in Germany: not a “message,” but a reflection of reality. A few months after Fassbinder died (in 1982, at 37, of drugs and alcohol), I was on the Montreal Film Festival jury with Daniel Schmid, a Swiss-German director who knew Fassbinder very well. He told me the rest of the story of El Hedi ben Salem, who came to Germany from the mountains of North Africa and drifted into Fassbinder’s orbit.

“Germany was a strange world to him,” Schmid told me. “He started drinking, the tension built up, and one day he went to a place in Berlin and stabbed three people. Then he came back to Rainer and said, ‘Now you don’t have to be afraid anymore.’ He hanged himself in jail.”

“Ali: Fear Eats the Soul” might sound like improbable, contrived soap opera. It doesn’t play that way. The reason it gathers so much power, I think, is that Fassbinder knew exactly what was meant by the title, and made the film so quickly he only had time to tell the truth. 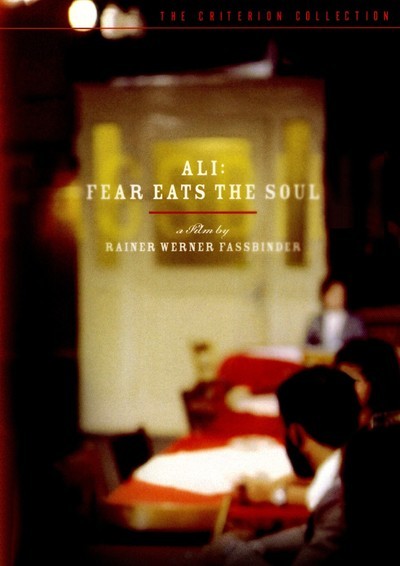