Mitchelling on the Regular: On Elvis Mitchell and KCRW's "The Treatment"

It was 2002. At the time, Cuaron was making the press rounds for his acclaimed film “Y Tu Mama Tambien" and Mitchell began his interview with him by pointing out how the showing of bare skin—or, really, the glowing, glistening fetishization of bare skin, whether it was in the very sexual "Y Tu Mama Tambien" or his big studio adaptation of "Great Expectations" starring Ethan Hawke and Gwyneth Paltrow—was a common theme in Cuaron’s work. This question caught Cuaron a bit off-guard, as he verbally stumbled a bit and started to realize, along with listeners who’ve seen his films, that—holy shit!—bare skin does play a large role in his movies.

And that is usually how “The Treatment” works. Broadcast every Wednesday afternoon out of Santa Monica NPR affiliate KCRW 89.9 FM (the show is also broadcast on various NPR stations around the country), "The Treatment" has been Mitchell’s usual spot for interviewing people in the entertainment industry, mostly in film. Mitchell relishes talking to people in entertainment, whether it’s in print (he also interviews celebs as a “special correspondent” for Interview), on the radio, at film festivals and advance screenings, and as curator of both LACMA’s Film Independent series and the Los Angeles Film Festival. But "The Treatment" remains the best possible venue to hear Mitchell in his element: conversing with an artist, peeling away all the layers and seeing what makes them tick.

In the two decades “The Treatment” has been on the air, Mitchell has talked to a lot of heavy hitters in film: Tom Hanks, Sir Anthony Hopkins, Denzel Washington, Leonardo DiCaprio, Robert Redford, Jodie Foster, Kristen Stewart, Steven Soderbergh, Christopher Nolan, Wes Anderson, Sofia Coppola, Joel and Ethan Coen. But he’s also a lifelong comic-book junkie who’s invited giants in that field as well, including Frank Miller, Ed Brubaker and Craig Thompson. And he interviews TV folk, usually showrunners and stars from shows he’s particularly fond of. He’s talked to David Chase about “The Sopranos” and Matthew Weiner about “Mad Men,” but he’s also chopped it up with Loren Bouchard & Jim Dauterive from “Bob’s Burgers.” There’s one ep where he had a jovial convo with the showrunners from the long-running ABC sitcom “The Middle,” proving that loyal, smart people do watch that show. He likes musicians, too. Burt Bacharach came by to talk about his memoir and tickle the ivories. Guitarist Dave Navarro and Metallica bassist Robert Trujillo showed up to discuss documentaries they were involved with. And fellow Detroiter Glenn Frey, who passed away earlier this year, went on “The Treatment” in 2012 to discuss his final album After Hours.

No matter who he talks to, Mitchell is fascinated by their process; he seems genuinely interested in understanding it, and delves into it in a unique, often surprising way. “The Treatment” may have been named after the script outline screenwriters write to pitch and flesh out a movie, but the title is also a way to describe the in-depth, wildly revealing way he interviews guests. He’ll barrel through a guest’s body of work and find a common theme they may not have picked up on. Guests have often walked away from a Mitchell interview with their minds fully blown (or, as director Jake Kasdan once called it during his interview, getting “Mitchelled”).

In 2000, Christopher Guest told the Dallas Observer how Mitchell properly wrinkled his brain, getting to the bottom of why Guest makes movies about bumbling but determined people: “…he truly was the first person--and I've done, oh, a thousand interviews--who said, 'What's interesting about these movies is...,' and then he started to talk about how these people take themselves so seriously. I felt like Rain Man, a moron, because I said, 'You're right, but I never thought of that.' I'm not being facetious. He really was the first person who said there's a running thing here, and since that time, I've actually thought about it, because I operate on a very spontaneous level, which may after the fact look cerebral in some way.” 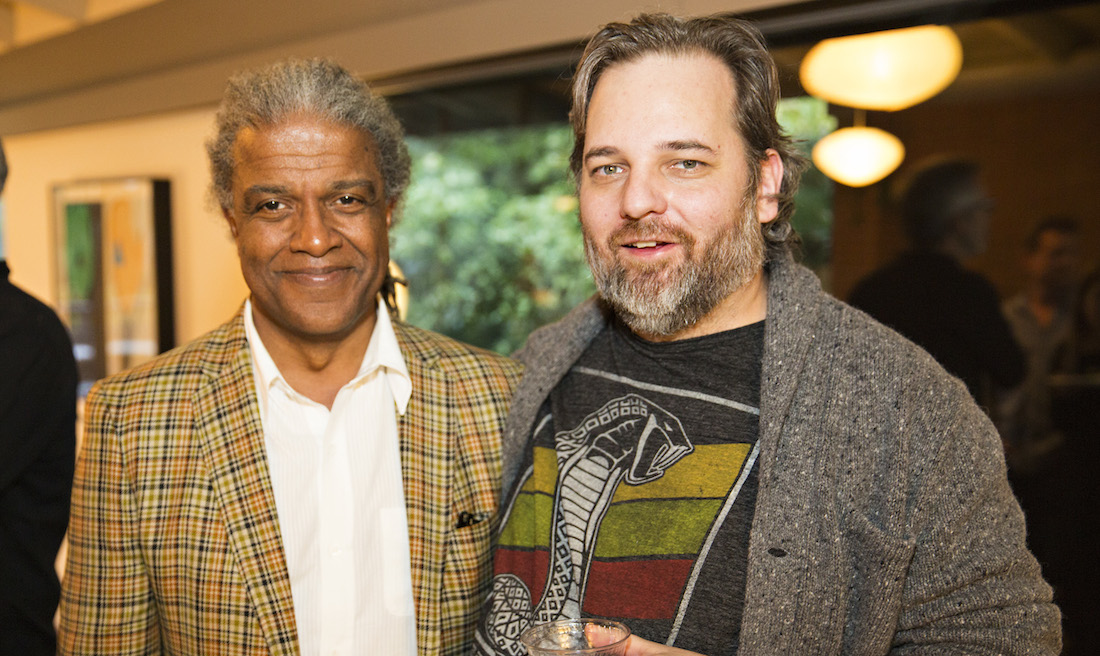 There have been times when Mitchell has gotten too obsessed with a theme and harped on it to the point where it left the guest baffled. After an interview Mitchell did with “Community” and “Rick & Morty" creator Dan Harmon, Harmon went over to his Harmontown podcast to discuss how Mitchell was a “wily and unexpectedly deep researcher,” continually going on about how Harmon’s work was all about sensitivity and exposed nerves. “I kept saying it’s about humanity versus systems,” Harmon said. “That’s what I always thought. But he kept saying, ‘Exposed nerves.’”

Nevertheless, Harmon said it had been an oft-imagined dream of his to be on the show. He’s not the first artist to say that. Getting “Mitchelled” means you’ve officially made it. Matthew Lillard ended his interview by gushing to a flabbergasted Mitchell about listening to his show while editing his film “Fat Kid Rules the World” and hoping to be a guest someday. That’s the highest possible praise for an interviewer, yet Mitchell can’t take a compliment at all, often tumbling a self-deprecating aside from his lips whenever guests say they’ve enjoyed their time in his presence.

It is kind of amazing how Mitchell has stuck with “The Treatment” for 20 years, given his penchant for ducking out on gigs. His longest stint as a film critic, for the New York Times, lasted four and a half years. While reviewing movies for “ABC World News Now” in the early ‘90s, he couldn’t be located for a segment, so the producers hired an Elvis impersonator. (Although there is unfortunately no video of this online, this was verified by Boyd Matson, who was the “World News Now “anchor at the time.) His first major job as a newspaper film critic, for his hometown paper The Detroit Free Press, lasted only six months. After that, he was hired as the cultural critic for the Los Angeles Times, a position he notoriously didn’t show up for. His time as the chief film critic for Movieline.com in 2011 was cut short after three months, when a detail he noted in a review wasn’t in the movie but in the script, which ultimately led to a controversial termination. And Roger Ebert fans may remember him as one of the original co-hosts of Ebert Presents At the Movies, until he parted ways with the show before an episode even aired.

“I spend most of my life not wanting to be found,” Mitchell told the Detroit Free Press in a 1994 profile. “And actually I’m pretty good at it.” Much like good friend and frequent interview subject Bill Murray (who has also been “Mitchelled” in his time), Mitchell is both an elusive and reclusive creature. The man isn’t on Twitter, Facebook, Pinterest, etc. When I tried to reach out for an interview for this site, I was told to write a letter to him and send it off to the KCRW offices. (I didn’t get a reply back.)

The jobs he’s stuck with the longest have been his public radio gigs. Besides his 20 years as host of “The Treatment,” he was the entertainment critic for NPR’s “Weekend Edition Saturday” for more than 20 years, until he stopped in 2007. He is a constant presence on “The Treatment,” rarely ceding the mic to guest hosts.

Mitchell’s skills as a dreadlocked, dulcet-voiced, pop-culture-soaking savant makes him a pleasure to listen to (I started listening to the show in my mid-‘90s college days, as the episodes were all piled up on its Web page, in mono-rific Real Audio), just as his reviews were a pleasure to read. But it’s always a pleasure for me seeing intelligent black people show off their critical skills. As many African-American film critics, from the notoriously contrarian Armond White (who gave Mitchell his first break as a radio film critic back when they both living in Detroit) to New York Times critic-at-large Wesley Morris to RogerEbert.com’s very own Odie Henderson and Angelica Jade Bastien, have proven time and time again, Mitchell showed people that not only can black people possess a damn-near-encyclopedic knowledge of pop culture, we can dazzle you with it as well. 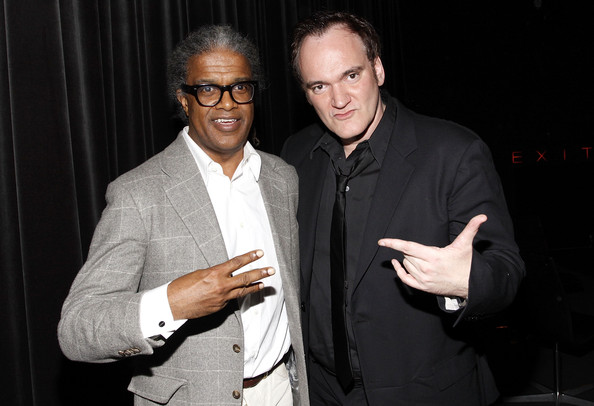 I still recall the time Mitchell dazzled me with his criticism, back when he was reviewing TV for Spin in the early ‘90s. He did a double review of “Beverly Hills 90210” and “Melrose Place” that left me kind of slack-jawed. It was so arcane and sarcastic and hilarious, it made me realize that I too could make a living as a smart (and smart-ass) black critic. Before I read Mitchell, I was led to believe that if you were a black person who knew a lot of pop ephemera (amongst black circles, it’s known as “white-people shit”), you were weird, square. But whether he was in print or on the air, Mitchell made me realize I wasn’t alone. It was OK—dare I say cool—to be black and nerdy. You could have an extensive knowledge of both the French New Wave and blaxploitation movies. He made this OK way before that film junkie Quentin Tarantino, another recurring Treatment guest, made being an eclectic cinephile a hip thing to be. (This certainly explains why Mitchell and QT are such chums.)

Whether it’s highbrow or lowbrow or whether it appeals to white folk or black folk, Mitchell continues to absorb a lot of arts & culture in his noggin, waiting for the right times to wring some of it out for unsuspecting fans. Mitchell always had a crazy, freewheeling, cross-referencing style that not only reveals how much of a pop-culture sponge he is, but also shows how so much of pop culture influences and inspires contemporary cinema. He certainly pulled out some savvy bon mots during his New York Times years. He memorably said the submarine nail-biter “U-571” “is filled with painstaking re-creations of the sonar pings that sound like the conga drums from Marvin Gaye's ‘What's Going On?’” He called the forgettable Steven Seagal actioner "Half Past Dead" “‘The Rock’ with a Wal-Mart budget.” He praised “21 Grams” by writing it “evokes the majestic heartbreak of the Willie Nelson song ‘Three Days,' a misery compounded by the sweetness of K. D. Lang's cover: 'Three days, filled with tears and sorrow—yesterday, today and tomorrow.'” He dismissed the cross-dressing comedy “All the Queen’s Men” by saying it’s “straining to get by on humor that is not even as daring as John Ritter’s glory days on ‘Three’s Company.’” He also said Johnny Depp’s performance in the first “Pirates of the Caribbean” movie—his best movie of 2003!—“suggests a man who has spent either a great deal of time with Keith Richards after a tour of the Rebel Yell factory, or a man who has spent a great deal of time watching Mike Myers do his Keith Richards impression.”

When a critic is as consistently, unpredictably entertaining as Mitchell, it’s easy to forgive whatever faults and flaws he has. Unfortunately, these days, Mitchell hasn’t been delving into criticism much. But at least he’s still getting inside people’s heads on “The Treatment,” wowing both guests and listeners and basically “Mitchelling” everybody on the regular.

To listen to episodes of KCRW's "The Treatment," click here.