Beyond Imagination: How “Independence Day” Changed the Blockbuster

Twenty years ago, Roland Emmerich’s “Independence Day” changed blockbusters forever in the span of four minutes. After teasing audiences with 45 minutes of mounting tension as city-sized spaceships entered Earth’s atmosphere and positioned themselves menacingly over some of the world’s most famous landmarks, the summer blockbuster lets loose. Blue lasers thunder into the Empire State Building, the U.S. Bank Tower and The White House, bursting them like grapes. Out of their splinters bloom walls of fire that swallow New York City, Los Angeles, and Washington, D.C.—cars, office buildings, helpless inhabitants—leaving little but the embers burning in rubble and breath caught in our throats.

For those who saw “Independence Day” in 1996, its destruction was something we’d never seen before. It was full of the sound and fury that can create the awe needed for an instant all-time movie moment. Movies may have traded in disaster and apocalypse before (Emmerich’s movie itself was a hybrid of 1950s alien invasion and 1970s Irwin Allen disaster movies), but not like this. This was operatic destruction—composed of screams and shattered glass, conducted with blood lust and guilty pleasure—the scales of which we’d never seen. Where other movies had teased annihilation in villain’s monologues, or shown its aftermath with disheveled Statues of Liberties, “Independence Day” not only sincerely threatened the end of the world, it made us watch it happen. It was horrifying, which is to say that it was also spectacular.

“If 'Jaws' had radically downsized its threat level to that of a single shark, then 'Independence Day' radically upsized its threat level to include global catastrophe,” Tom Shone writes in his book, Blockbuster. More significantly, it didn’t leave the threat a bluff. Blockbusters, by their high-concept and explosion-loving nature, have always pursued bigger spectacle; “Independence Day” expanded the cinematic vocabulary with which to do so. It was an evolutionary leap, one blockbusters can be prone to in order to shift with their changing environments and ensure their proliferation. Even the Godfather of the Blockbuster saw that: When the movie was released, Steven Spielberg told Roland Emmerich, “This movie will do more to change blockbuster summer movies than any movie before.”

That change began as soon as audiences waited for hours in line to see “Independence Day” on opening weekend. Money doesn’t just talk in Hollywood, it instructs, and what “Independence Day”’s eventual $817 million worldwide earnings told studios about audiences was, “If you destroy it, they will come” (apologies to “Field of Dreams”). 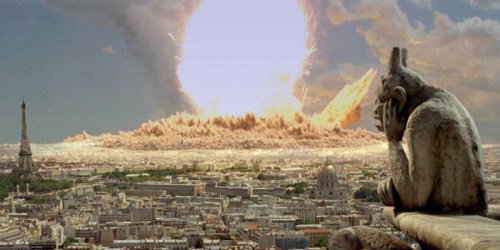 It all abided by the adapted spirit of that co-writer and producer, Dean Devlin, boasted in a making-of feature for “Independence Day”: “You won’t find a film that has more on screen than this film, and that’s what we’re most proud of.” “Deep Impact” and “Armageddon” represented that attitude, hitting an irreversible turning point for blockbusters: the collision between “Independence Day”-inspired “more on screen” lust for mass destruction and the growing ease with which it could be satisfied with advancements in CGI technology. In the span of two years, “Independence Day”’s elaborate four-minute apocalyptic sequence (stitched together with practical effects, close-ups, digital compositing, and editing) could be replaced by "Armageddon" destroying Paris in less than ten seconds with a single computer generated wide-shot. With the impossible becoming increasingly possible to be rendered on-screen, studios could now more easily provide audiences with new levels of disaster. If the combined $900 million international box office of “Deep Impact” and “Armageddon” was any indication, that’s exactly what audiences wanted. So, an arms race of one-upmanship began.

9/11 provided a brief hiatus from destroyed buildings, but studios wasted little time picking up where they left off. Roland Emmerich outdid himself with “The Day After Tomorrow” (2004)—offering an exploding Coliseum, Los Angeles riddled with tornados, and New York City being both drowned and frozen. The ensuing years saw CGI became the industry standard for special effects and destruction in blockbusters followed suit. Franchises that ran throughout the 2000s and 2010s especially provide a barometer for how one-upmanship affected blockbusters, and made them all feel like disaster movies: “G.I. Joe: The Rise of Cobra” (2009) melting the Eiffel Tower led to “G.I. Joe: Retaliation” (2013) heaving all of London into oblivion; “Transformers”’ (2007) modest battle in Los Angeles led to “Transformers: Dark of The Moon” (2011) having a giant robot worm crush half of Chicago into piecemeal; “Star Trek” (2009) dropping a huge drill in the San Francisco Bay led to “Star Trek Into Darkness” (2013) bowling an entire spaceship into the city. 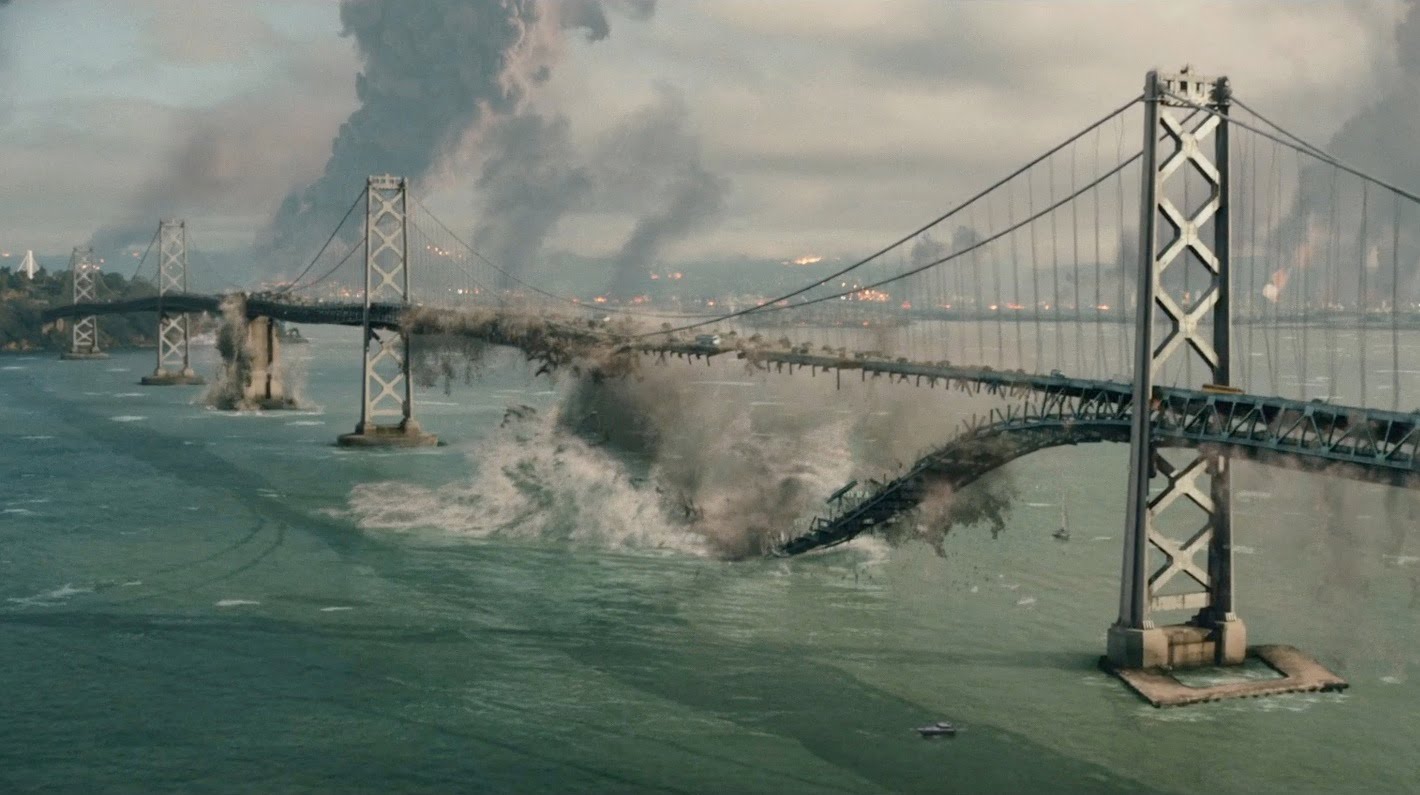 During their rise in the 2010s, superhero movies—now our most successful form of blockbuster—most of all became disciples of the “put more on screen” philosophy. The more modest destructions of “The Dark Knight” and “Iron Man” in 2008 were replaced with movies like “The Avengers,” “Man of Steel,” “The Guardians of the Galaxy,” “X-Men: Days of Future Past" and “Batman v Superman: Dawn of Justice,” films that devoted their entire third acts to spaceships careening into skyscrapers, office buildings crumbling like peanut brittle, and laser beams shooting from the sky. If that recalls Emmerich’s film, he agrees. “In a way we unknowingly invented a new thing, with no plan,” the director told Complex. “I see the influence of 'Independence Day' everywhere: in all the Marvel movies, and all the superheroes of the DC Universe, there’s always an alien invasion, there’s always a disaster element.”

It is into that competitive environment, governed by the laws of modern blockbusters, that Emmerich began work on the “Independence Day” sequel. “I see all the other big VFX films out there and I keep up on it all and I know how competitive it is now,” Emmerich told postPerspective, acknowledging that for a new “Independence Day” to leave a mark, it had to both put more on screen than its current competition and the original movie.

If nothing else, you can’t say “Independence Day: Resurgence” doesn’t put a lot on the screen. The mothership this time is the size of the Atlantic Ocean, and when seen from space (which of course you do), looks like it’s leeching half the Earth’s surface. It’s so massive it has its own gravity, which apparently means it can indifferently suck up Singapore and then drop it on London, like the world’s largest malfunctioning Roomba. When this monstrosity touches down, its landing gear is capable of shoveling huge swaths of cities like snow. If Emmerich’s goal was to lean into his own movie’s legacy and surpass the size of any others, he succeeded. Certainly he seems to think so. When Jeff Goldblum sees the mothership and says, “That’s definitely bigger than the last one,” it sounds like self-congratulations.

Congratulations aren’t in order. “Independence Day: Resurgence” may be big, but to such an extent that it’s absurd. It exemplifies how the 1996 original may have changed blockbusters forever, but no longer for the better.

There’s a moment after the movie’s emoticon-shrug-of-a-destructive-centerpiece where a soldier reports, “The damage to the East Coast is beyond imagination.” “Beyond imagination” is a neat summation of the problem that afflicts Emmerich’s sequel and its contemporaries. “Put more on-screen” has run amuck. Directors, like Emmerich, may be creating more sizeable illusions of destructive grandeur, but they’re reaching sizes that are infantine in their separation from reality. They leave nothing to our imagination, not just in how much they show us, but how destruction has become too big to be imaginable. The power of the original “Independence Day” was that the scope of its disaster (if not its source) was close enough to reality that it enabled our awed What Ifs. Let’s not forget that when 9/11 happened, a common reaction was, “This is just like 'Independence Day.'” Modern movies lack that.

Now, in a matter of seconds, skyscrapers are dominoed into each other (“San Andreas”), whole cities are lifted into the air (“The Avengers: Age of Ultron”), multiple planets are simultaneously snuffed out (“Star Wars: Episode VII - The Force Awakens”), and one building is dropped vertically onto another (“Independence Day: Resurgence”). None of it matters anymore; none of it resonates. How could it? Emmerich and his peers are like hobby fishers who return from outings saying they caught fish as big as their arm-span: Eventually you don’t buy it anymore.

“Independence Day: Resurgence” certainly exhibits many of the other well-documented ailments of modern blockbusters: disregard for human casualties, tiresome repetition of disaster iconography and constant defaulting to global threats. As Sam Adams wrote about "X-Men: Apocalypse": “Raising the stakes actually lowers them; it’s a threat that will never be fulfilled.” But more than anything, it reflects the confusion of size with impact and volume with affect. Blockbusters are so intent on size and beating their competition, they’re forgetting why any of it should matter: to please an audience.

“Independence Day” never failed at that. In that way, the biggest disappointment with its sequel is that it, like other modern blockbusters, possesses so little of what made the original—and that iconic four-minute sequence—so appealing. Twenty years ago, “Independence Day” left us excited to get an answer to the question, “Where will blockbusters go from here?” “Independence Day: Resurgence” and its ilk now leave us with the same question. But they’re also increasingly providing the answer too: nowhere. It may not have been the legacy Roland Emmerich’s film began with, but it’s the one it has now.