Early in “Deep Impact” we learn that a comet “the size of Mt. Everest” is on a collision course for Earth. There would seem to be two possible outcomes: (1) The comet hits Earth, destroying it, or (2) the comet does not hit Earth, in which case humanity is spared but the audience is denied the sight of lots of special effects. In the first scenario you don't get the obligatory happy ending, and in the second everyone leaves feeling cheated.

Most doomsday movies avoid this choice by prudently choosing less than apocalyptic events. A volcano, a twister or a tidal wave can supply lots of terrifying special effects and still leave a lot of people standing. But “Deep Impact” seems to back itself into a corner, and maybe that's why the producers hired not one but two of the brightest writers in Hollywood to work on the project: Bruce Joel Rubin (“Ghost”) and Michael Tolkin (“The Player”). Together, they've figured out how to have their cake and eat it, too.

How do they do this? I would not dream of revealing their inspiration, although you may be able to figure it out yourself. Meanwhile, you can enjoy the way they create little flashes of wit in the dialogue, which enlivens what is, after all, a formula disaster movie. What's the formula? Assorted archetypal characters are introduced, they're assigned personal problems, and the story cuts between them as the moment of disaster grows closer. I always think it's more interesting if they know from the start that there's a big problem; I get tired of scenes in which they live blissfully unaware of the catastrophe unfolding beneath their feet, or above their heads, or wherever.

“Deep Impact” begins with the obligatory opening pre-catastrophe, in this case a runaway semi that mows down a Jeep and kills the astronomer who is bringing news of the approaching comet. (The other movie I saw on the same day, “The Horse Whisperer,” also opened with a runaway semi, and indeed I cannot recall a single movie in which a semi on a two-lane road did not careen out of control.) Then there's a little ritual media-bashing; Tea Leoni plays a reporter for MSNBC who suspects there's more to the story of a cabinet official's resignation. She accuses him of having an affair with a woman named “Ellie,” and he gets to say, “I know you're just a reporter, but you used to be a person.” (The approved media response to this is, “Look who's talking! A Cabinet member!”) Soon she discovers her error; he is resigning not because of Ellie but because of an E.L.E., which is jargon for “Extinction Level Event.” He wants to spend more time with his family, and has stocked a yacht with dozens of cases of vitamin-rich Ensure. He must not have been invited to the briefing where it was explained that all surface life would be destroyed by the comet, or the other briefing about the 1,000-foot-tall tidal wave. My guess is, the president wanted him out of the Cabinet.

The president, played convincingly by Morgan Freeman, goes on TV to break the bad news to the world, and talks of the Messiah Project, which will send a manned U.S.-Russian space craft to plant nuclear bombs in the comet and blow it up. We meet the Messiah crew members, including old Spurgeon Tanner (Robert Duvall), called out of retirement because he once landed on the moon and might be able to land on the comet.

The younger crew members resent him, we are told, although dissension onboard is never followed up on. The veteran has a nice line about the youngsters: “They're not scared of dying. They're just scared of looking bad on TV.” There's another good line at the high school assembly where the kid (Elijah Wood) who also discovered the comet is honored. A friend tells him, “You're gonna have a lot more sex starting now. Famous people always get more sex.” And I liked a line from late in the movie, when one hero tells another, “Look on the bright side. We'll all have high schools named for us.” But the movie as a whole is pretty routine. There's a laborious subplot in which Tea Leoni resents her father (Maximilian Schell) for divorcing her mother (Vanessa Redgrave) and marrying a bimbo, and while Redgrave brings a nice sad quality to her scenes, the rest of the subplot plays out suspiciously like a scheme to place two humans in front of a big special effect. There also are some fairly unconvincing scenes in which millions of people try to flee from a city, and all of them are trapped in gridlock except, of course, for the two who are required by the plot to get somewhere fast.

Whether Earth is saved or doomed, or neither, I will leave you to discover for yourself. I personally found it easier to believe that Earth could survive this doomsday scenario than that the Messiah spacecraft could fly at thousands of miles an hour through the comet's tail, which contains rocks the size of two-car garages, without serious consequences. On the disaster epic scale, on which “Titanic” gets four stars and “Volcano” gets 1.5, “Deep Impact” gets 2.5--the same as “Dante's Peak,” even though it lacks a dog that gets left behind. 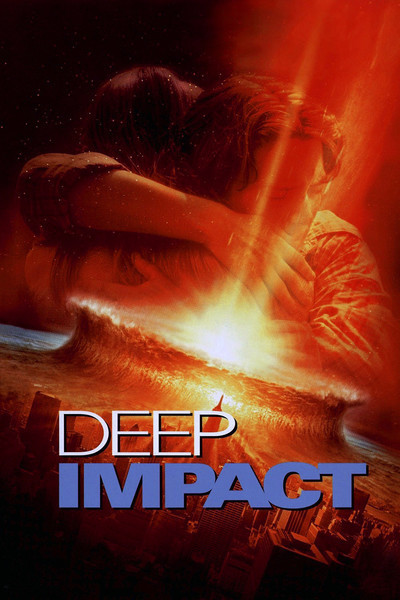