Tom Hiddleston showed up for the Disney, Pixar, Marvel and Lucas Film Ltd "Let the Adventures Begin: Live Action at the Walt Disney Studios" on Saturday (August 10) and he apologized for not coming in full Loki costume and for not singing. Yet the fans weren't disappointed as they were treated to never before seen clips of "Thor: The Dark World" and more—including news that Johnny Depp will be reunited with Stephen Sondheim and Angelina Jolie will be frightening kids everywhere as Disney queen Maleficent.

Besides Hiddleston, Natalie Portman and Anthony Hopkins were on hand for the Thor presentation. Thor will be reunited with Jane Foster (Portman) and she'll go to Asgard as Thor battles an ancient race and must ask Loki to help. Now is trusting Loki ever a good idea? Of course not, but what would Thor be without Loki? Boring. The film releases November 8, 2013. 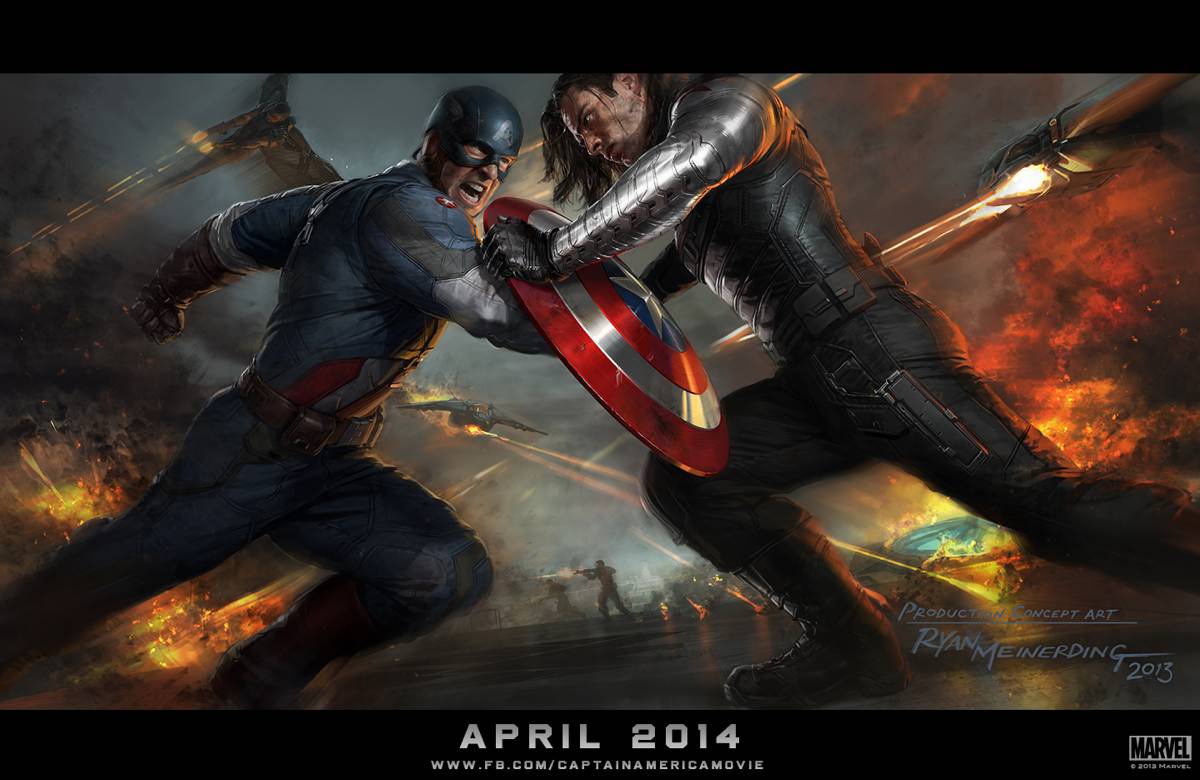 After seeing a clip from Marvel's "Captain America: The Winter Soldier," you might want to take the stairs instead of an elevator. Another rough clip showed just how much CGI is used with some segments just the basic shapes blocked out before the surface has been applied to structures. The first Captain America movie had our hero in his past and awakening to try and make sense of the new world he finds himself in. Now that he's used to cell phones and computers, his challenge is understanding the morality of first-strike wars. "I thought the punishment came after the crime," he comments. Captain America teams up with some old friends like Black Widow (Scarlett Johansson) and some new friends, the Falcon (Anthony Mackie) as they battle the Winter Soldier. Robert Redford is Alexander Pierce (a normal human being affiliated with SHIELD) and Samuel L. Jackson returns as Nick Fury. It's in theaters April 4, 2014.

In June of this year, a less well-known Marvel title, "Guardians of the Galaxy" went into production in London. A jet pilot unites a questionable assortment of aliens, forming a squad to protect the galaxy from cosmic threats. The cast includes Zoe Saldana as Gamora, Karen Gillan as Nebula and Chris Pratt as Star Lord. There's a raccoon sidekick, Rocket Raccoon so expect some cuteness and humor. Hopefully Saldana will be wearing more clothes to keep this Disney-ish? Or will there be a Marvel versus Disney morality and dress code divide? The film is slated for an August 1, 2014 release.

Disneynature is taking us back to bear country with it's "Bears." This isn't an animated feature but it's sure to be family-friendly. "Bears" is about the adventures of a mother grizzly bear and her two cubs over a one year period. The same team who brought the touching 2011 "African Cats" to the silver screen, Alastair Fothergill and Keith Scholey, directs. Disneynature's documentary will open just before Earth Day and a portion of the proceeds during opening week (April 18-24) will be donated to the National Park Foundation. The location, Katmai National Park in Alaska, was the backdrop for German director Werner Herzog's 2005 "Grizzly Man." Remember, bears may look as cute and cuddly as an oversized teddy bear, and the Disneynature's "Bears" footage shown to the D23 audience elicited aahs for its high cuteness quotient, but bears are wild animals capable of killing humans, even if they've spent 13 summers together. "Bears" arrives in theaters April 18, 2014 to celebrate Earth Day.

There may be no Batmobiles at D23, but they did have the Le Maxium, a car I would personally like to get into for a spin. The six-foot "Modern Family" star Ty Burrell came on stage in this tinier than a VW bug vehicle for the presentation on the upcoming Muppet movie, "Muppets Most Wanted." Burrell apologized to any French speakers; he plays French Interpol agent Jean Pierre Napoleon. The film stars Ricky Gervais. Tina Fey, Kermit the Frog and Miss Piggy joined the D23 audience in a "live" cast from somewhere far away although Miss Piggy thought it was P23 for Piggy and her age. In this movie, Kermit finds himself entangled with the world's number one criminal and master jewel thief, Constantine, who is the mirror image of Kermit. The Muppets are on a European tour while Constantine is plotting to steal the crown jewels. "Muppets Most Wanted" comes out on March 21, 2014.

For the 2014 holiday season, Disney will reunite Johnny Depp with Sondheim for "Into the Woods." Depp was in the 2007 "Sweeney Todd: The Demon Barber of Fleet Street." Depp was directed by Tim Burton for "Sweeney," but Disney has Rob Marshall ("Chicago" and Disney's "Pirates of the Caribbean: On Stranger Tides") slated to direct. Meryl Streep will play the witch and Depp will be the Big Bad Wolf. Also joining the cast are Anna Kendrick, Chris Pine and Emily Blunt.

Sondheim's 1987 "Into the Woods" with book by James Lapine, debuted in San Diego before it went to Broadway. The story is about the quest of a baker and his wife to have children and how their lives are intertwined with their neighbor a witch and the main characters from the Brothers Grimm fairy tales of "Little Red Riding Hood," "Jack and the Beanstalk," "Rapunzel" and "Cinderella."

Another Cinderella will be brought to life under the direction of Kenneth Branagh who, in an exclusive pre-recorded sneak peak, assured fans of the 1950 Disney animated fantasy movie, that due respect will be paid to those key magical moments. I can't wait to see those glass slippers and a pumpkin turned into a carriage. If Cinderella watches are still a tradition for Disney fans and with the growing influence of Disney princesses on American girls and perhaps girls everywhere, should we worry that a Cinderella movie will perpetuate the Cinderella syndrome or will this 2015 Cinderella have a bit more moxie? We'll have to wait until March 13, 2015 to see. 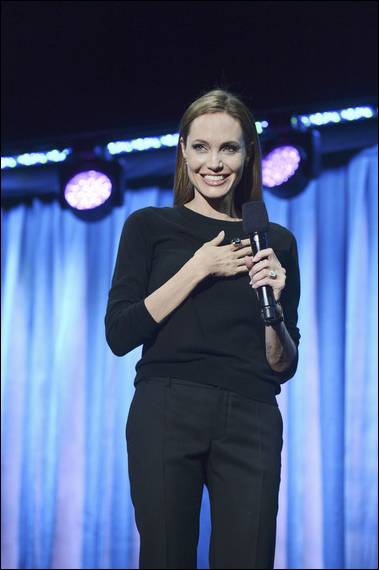 As if the balance out this damsel in distress, Disney is taking its iconic villainess from the 1959 animated classic, "Sleeping Beauty," and imagining her back story in the live action feature "Maleficent." Angelina Jolie came on stage dressed casually in a black pullover and black pants. She mentioned, "I've loved Disney since I was a little girl" and said she believes that Disney movies "have good heart." Acting in a Disney movie "feels like home, it feels like family," she confessed. She said the movie has elegance and grandeur and her character is "wonderfully, deliciously cruel." Dressed in costume and elated with being part of the Disney universe, bringing one of its classic characters to life, she enthusiastically met children on the set, but they were frightened. One child even asked her mother, "Please tell the mean witch to stop talking to me." That, however, was an opportunity for her child Vivienne. "Vivienne was the only little girl who wouldn't scream" and thus she got a small role in the movie. D23 audience members were also excited over possible Brad Pitt sightings at Disneyland when Jolie commented that her brood were wandering around the amusement park. "Maleficent" opens in theaters on July 2, 2014.

Disney classic animation made Disney studios, but Walt Disney was the optimistic genius who brought it all into being. Walt Disney foresaw the future he wanted in Disneyland's Tomorrowland. In the movie "Tomorrowland," filmmakers pondered what are the secrets in the black box marked "1952" from the Disney archive morgue? How did these artifacts relate to the World Fair, Walt Disney, Cary Grant, Amelia Earhart, space technology and a 1928 copy of an Amazing Stories magazine. After all these misdirects, Sean Bailey, director and co-writer Brad Bird and co-writer/producer Damon Lindelof revealed that the action-adventure movie would star George Clooney, Hugh Laurie, Britt Robertson, Raffey Cassidy and Thomas Robinson. "Tomorrowland" opens on December 12, 2014. 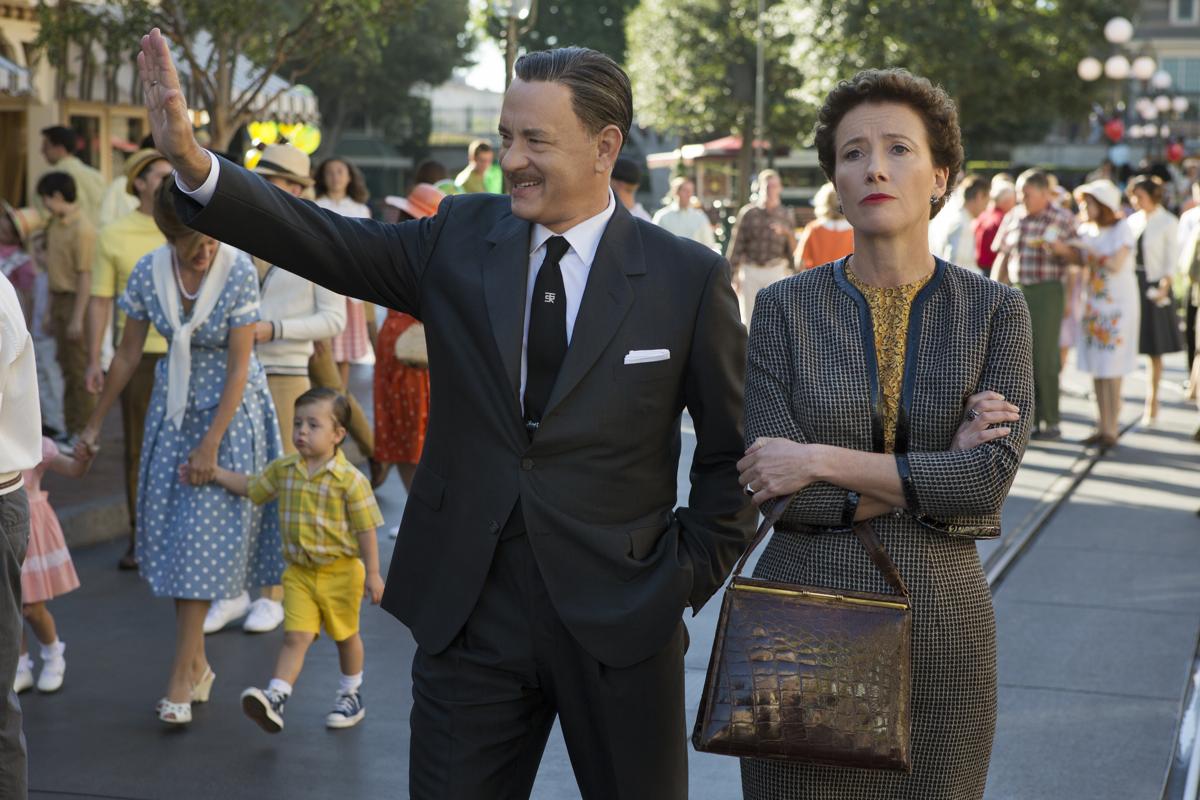 Closing the presentation was a reminder that the movie "Mary Poppins" is 50 years old and the tale of how Walt Disney obtained the rights from P.L. Travers is the subject of the movie "Saving Mr. Banks." The movie stars two-time Oscar winners Emma Thompson and Tom Hanks. Clips show Disney as an optimist whose patience was tried by the uptight Travers. Thompson and Hanks didn't appear at D23, but Jason Schwartzman ("Slackers" and "I Heart Huckabees") and B. J. Novak ("The Office" and "Inglorious Basterds"), who portray the famous composing team of Richard and Robert Sherman where on stage briefly, disappearing all too soon, but they came back on stage with a piano to lead the audience in a sing-along finale of "Let's Go Fly a Kite"and were joined by Richard Sherman.

"Saving Mr. Banks" hits theaters December 13, 2013 limited, December 20, 2013 wide. This is the first time Walt Disney has been portrayed in a film. Fans who love the musical movie with Julie Andrews and Dick Van Dyke, who are also portrayed in "Saving Mr. Banks," or those who love the Broadway musical that the movie inspired, will be glad that Walt Disney didn't give up even after 20 years of trying to get the movie rights because he was, we are told, a man of his word and kept the promises he made to his daughters. That certainly makes the long lines in Disneyland and D23 seem insignificant.