Crying on the Outside

I cried yesterday at a retreat while listening to Michael Buble's rendition of "Smile." The tears came from out of nowhere. I was in a stretch class, on the floor stretching before my next exercise class. The instructor was playing mellow ballads and suddenly the words came wafting through: "Smile, even when you're aching, smile though your heart is breaking..." and the tears flowed; not only tears but sobs, paralyzing sobs that left me balled up on the exercise mat. A fellow guest whose compassion and empathy were at the ready led me out of the class. She understood what I was going through because she has experienced it. Music has a way of cutting through all of your defenses. It goes straight to the heart and just zings you. Roger and I loved those sappy romantic ballads and danced to them when no one was around.

I have been on the go continuously for the last two months since Roger passed. There were the wakes, and the funeral and the public tributes and private memorials and awards shows and film festivals, and so forth. And I have been smiling through it all, remaining stoic, having my private moments but standing straight and steadfast. I have been so grateful for all the accolades to Roger and tasks to keep me busy. But I began to recognize how tired I am, how run-down. So I took myself to a retreat so I could be fed healthy foods, taken on nature hikes in the mountains, led in meditation and inner reflection, and provided an atmosphere where I could get a good night's sleep. As the days pass, I am feeling healthier, more rested, so these tears came as a shock to me. But, oh, what a welcome relief.

These, of course, were neither the first tears I’ve cried nor will they be the last. But these tears were cathartic in a way that opened me up to sharing these very personal feelings. It helps me so much to read books and articles by others who have suffered loss. I marvel at how open and honest they can be by showing the rawness of their feelings. I know what it feels like to clench my fists at the sky in anger, but I can't describe it like Joan Didion in "The Year of Magical Thinking." I have on my nightstand Joyce Carol Oates' memoir, "A Widow's Story," and have been afraid to open it up, staring at the word "widow" in defiance. Yes, I've become a member of that club that I never wanted to join — the Widow's Club. Fortunately, I have good friends who can help me navigate that terrain. I also have all of the letters and cards from friends, family and strangers who have given me advice on how to get through the first days and months after suffering such a great, personal loss. When I leave the retreat I will sit down and read through every single one of those. Knowing how others handle grief will be important for me, although I know it can be highly subjective and individual. 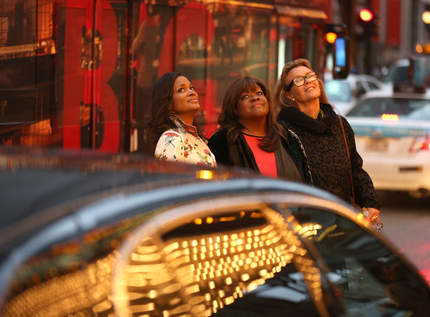 But I also have to tell you that my smiles were not fake; they were genuine. I have felt so in touch with Roger that sometimes it feels like he hasn't gone at all. And I don't think that some of you would be surprised if I told you that Roger, the great communicator, has found a way to stay in touch with us "from the other side." Next Tuesday, June 18, is his birthday, and we are planning a series of articles by and about Roger on RogerEbert.com. I miss his blogs and his reviews and his wisdom, his compassion and kindness, his wit and humor. But he would be pleased to know that we are carrying on. He always said, "Don't let my death be your death."
Advertisement

I have so much more to tell you. But for now I want you to enjoy the articles that our editors and contributors have posted on the website. Read a take on “Man of Steel” that you won't find anywhere else. Decide for yourself whether Sofia Coppola’s detractors are being sexist? Find out what's opening at theaters this weekend from contributors like Sheila O'Malley on "The Internship," Susan Wloszcyna on "Fill the Void," Steven Boone on "Dirty Wars," and Odie Henderson on "This Is The End." Take time to leisurely search through our archives. The new search functions are pretty awesome.