In one of the early scenes in "The Internship," heroes Billy and Nick (Vince Vaughn and Owen Wilson) have a video-conference interview with two recruiters from Google at a computer in a public library. Billy and Nick are two forty-something wristwatch salesmen who lost their jobs when their company folded (nobody uses watches anymore). Both men are now adrift in a world that has passed them by. After a long night of sadly Googling the "jobs for people with no skills", Vaughn's Billy stumbles upon Google's competitive internship program and signs up himself and his buddy Nick for an interview. Batting away the children who want to get on the public computer, Billy and Nick shout at top-volume into the screen, despite the fact that they are told by the recruiters, "Guys, we can hear you". Billy and Nick jam their heads close together like an old vaudeville team posing for a manic promotional photograph and jabber right into the camera, exuding not only obvious technical incompetence but blatantly embarrassing need.

Both men seem to be on the verge of mental collapse. They're Willy Lomans on speed. It's excruciating to watch. And hilarious.

Directed by Shawn Levy and written by Vince Vaughn and Jared Stern, "The Internship" stuffs some creaky gear-shifts and boring exposition in its first 15 minutes; even Will Ferrell's one scene falls a little flat. But the Google interview is the moment the film explodes. The energy is uproarious.

Billy and Nick (miraculously, after that debacle of an interview), are chosen to join the Internship summer program at the Google headquarters in Mountain View, California. They will compete with other "Nooglers" (that's what they're called, don't blame me!) for the coveted positions offered to only a couple of interns at the end of the summer. Billy and Nick, of course, are the oldest people in any room at Google. The college kids assigned to their team immediately treat them with scorn and disrespect, with good reason: Billy, in trying to describe an idea he has for an App (an idea that already exists, of course), keeps saying that after you take the picture with your phone, you put it "on the line".

The internship program is run by a Mr. Chetty, played wonderfully by Aasif Mandvi as a Google version of Lou Gossett, Jr.'s drill sergeant in "An Officer and a Gentleman." Mr. Chetty is cold, frightening, and unapproachable. The other members of Billy and Nick's team are played by Tiya Sircar, Dylan O'Brien, Tobit Raphael, and Josh Brener. The script delineates every character smartly, following them on similar journeys of transformation over the course of the summer. Tobit Raphael is Yo Yo, a kid so pressured by his mother to be the best that he picks at his eyebrows (by the end of the film he only has one eyebrow). Tiya Sircar plays a bubbly young woman who talks a big game about her sexy "cosplay", only to reveal in a later scene that she's never had a boyfriend, and all her experiences are figments of her imagination. Dylan O'Brien's Stewart is a serious young man who can barely drag his eyes up from his phone; he displays the practical cynicism of a generation that knows that graduating from college is not a guarantee of anything.

The team does not bond immediately, and nobody wants Billy or Nick slowing them down. It's tense. But during a ferocious Quidditch match with a rival team, filmed with the intensity of a World Cup final, Billy gives an inspirational speech to his team about a "little welder girl" who wanted to go to dance school and never gave up. It's extremely stupid and extremely enjoyable, and the team bonds and comes from behind to almost win the match. They start to work together. Billy and Nick play catch-up in terms of technology, and, of course, the old geezers have a couple of life lessons to teach the young whippersnappers, too. Everybody wins.

The movie depicts Google culture as if it were a benevolent version of life in a cult compound, with everyone wearing colored beanies and "Noogle" T-shirts, riding colorful Google bikes around the campus, and taking the Google shuttle bus into town. The interns compete in different challenges: coding, answering helpline calls, locating bugs. It's hard to believe that a scene about answering a Google helpline could be a gripping cliffhanger, but Levy and his cast pull it off.

There are a couple of problems with the material, none of which ended up mattering much to me. One is the glorification of Google as both a successful company and a mystical entity that makes the world a better place. This sentiment is treated without irony. The food is free at the commissary! There are "nap pods" where you can rest! There's a gigantic slide between floors! It's the best place ever! Another potential hitch is that Billy and Nick are angling for an anonymous entry-level job at a gigantic corporation that's hardly the Emerald City that everyone seems to think it is. How long would these two last in homogenized corporate culture, anyway? Do they really want to become a Noogler, filled with "Googleyness"? Their enthusiasm doesn't quite track.

The flip side of these caveats, though, leads us to the underbelly of the film, its real guts. Google is just the excuse to tell a story about the challenges of growing older, the importance of taking risks, and what it means to be a man in a changing world (shades of Willy Loman again). On that level, the film is solid and quite effective. The moments of sentiment, when they come, feel fully earned, and they come out of characterization.

In time you start to care about Yo Yo's emotional life, for example, and when he busts loose in one scene, it's quite satisfying. Owen Wilson's character has never had a relationship that lasts longer than a couple of months, and during his time at Google he begins a flirtation with a serious woman who is always on her way to a meeting (played by the fantastic Rose Byrne). She's a tough nut to crack, and there's a beautiful quiet scene in which she suddenly reveals some of her life regrets to Nick. The director handles the film's tonal dips and swerves confidently. He allows "The Internship" to slow down on occasion, and gives both the story and its characters room to breathe.

The ending pumps up the suspense in an artificial way, but by that point the real work has already been done. It's not about winning the competition. It never was. Billy and Nick are baffled by much of what they encounter at Google, and both have their challenges. They're only in their forties but they're already being treated as old and irrelevant; it's a new experience, one they are not yet used to.

Both actors play that anxiety beautifully. You can see disappointment and fear flickering in Vince Vaughn's eyes: he is someone who is used to breezing through on his charm, but the charm is no longer working. He can't just grin at people anymore in a cute conspiratorial way and get away with murder. Everyone sees through him now. And Owen Wilson's Nick is a bit of a follower. As long as he had Billy by his side, he didn't have to make his own choices. Now it's time to step up and be an adult. Besides, some of the things they bring to the table at Google are relevant and necessary. At one point, Wilson gives Vaughn a pep talk, saying, "You're tough! You grew up in the '70s! You didn't wear a bike helmet. You're tough!"

It's no surprise that Owen Wilson and Vince Vaughn have such entertaining chemistry onscreen. We saw it before in "The Wedding Crashers", the gigantic sleeper hit of 2005. What is a surprise is that it has taken them this long to appear together again. In the studio system days, they would have been set to work cranking out comedies as an established duo, beloved by a vast audience. But in today's more individualistic, independent industry, it's taken Wilson and Vaughn nine years to get together again. It's good to see them. 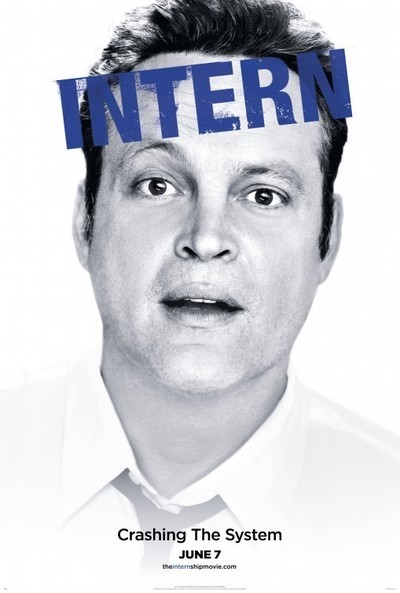