Claustrophobia isn't often considered a cinematic asset beyond tales of suspense and horror. But the award-winning Israeli drama "Fill the Void," about a naive 18-year-old girl in an ultra-orthodox Hasidic community who dreams of finding the perfect match in an arranged marriage, capitalizes on its cloistered atmosphere. The compelling story is remarkably focused — even as it hints at such influences as Jane Austen, "The Godfather" and "Fiddler on the Roof" — and the emotional stakes lofty, both for the characters onscreen and, especially, the audience.

Most of the action takes place in cramped if homey domiciles in Tel Aviv, with only a few detours onto sidewalks or inside of a synagogue. Nearly the only modern-day intrusion into this hermetically sealed society is the booming techno-music beats of an outdoor Purim celebration, which are quickly muffled by the closing of a window.

With skilled deployment of long takes, lingering close-ups, repeated musical cues and meticulous lighting, director-writer Rama Burshtein — a Hasidic insider herself — never allows the intimacy to become too stifling, however. Instead, she vividly depicts a clannish culture that is likely to feel foreign and perhaps off-putting to generations that came of age in a progressive post-feminist era.

And yet the fair-minded will be able to discern the benefits of such a lifestyle, including strong extended family ties and a sense of a higher purpose, along with the drawbacks. In fact, Burshtein goes out of her way to show — as is the case in many old-world cultures — that despite initial appearances, in this society the fairer sex ultimately calls the shots.

Still, tradition still rules the roost. In this patriarchal society, married women hide their hair under a turban-like headpiece and often sit at a distance from the men as they drink their wine, chant, and conduct religious readings and rituals. Young females like Shira (played by delicate beauty Hadas Yaron with an uncompromised honesty that is both refreshing and frustrating) are indoctrinated into accepting that their mates will be chosen for them, though they do have the right to refuse.

But as Shira and her mother (Irit Sheleg, whose Rivka is far stronger than her outward demeanor suggests) stalk possible suitors at grocery stores, a tragedy perhaps too conveniently upends their plans. The family's older daughter, the 9-months-pregnant Esther, suddenly drops dead and leaves her newborn son and a grieving husband behind. Rivka goes into manipulation mode, pushing Shira to marry her brother-in-law, Yochay (Yiftach Klein), to prevent him from whisking her grandson off to Belgium, where an eager-to-wed widow awaits.

Suddenly, Shira, an attractive adolescent who ambles along in life when she isn't playing the accordion (not the most self-aware person, she responds to a potential beau when asked why she chose the instrument: "I can't play anything else") is forced to make a difficult choice. Is she obligated to take her sister's place alongside a man who is several years her senior and raise his and Esther's child as her own? Or does she carve out her own path while denying her mother's wish?

Matrimony gets little respect from Hollywood these days, save for the bawdy, farcical variety found in "Bridesmaids" and the execrable "The Big Wedding." "Fill the Void," however, has more in common with a '50s Doris Day comedy in which wedlock is a woman's crowning achievement and spinsterhood is to be pitied. Yet Burshtein wisely individualizes each case in some way, including that of Shira's disabled single aunt, who dons a wifely turban to "avoid questions."

The filmmaker also lets her female characters demonstrate their impact on the community in less obvious ways than the male figures. It is no accident that women are often framed by gauzy white fabric, such as curtains and veils, illuminated by rays of light — suggesting the presence of a spiritual force — while the men conduct their business in dark, shadowy confines.

With such close quarters, "Fill the Void" is thankfully blessed with memorable faces, especially Yaron's, whose mesmerizing features — including her "Now, Voyager"-esque untamed brows — recall the virginal heroines of the silent era. Another visual plus: a sweater wardrobe that is surprisingly fashion-forward. Meanwhile, in contrast to the doughy awkward bachelors in the running for Shira's hand, Klein's handsome visage — reminiscent of a more refined Sacha Baron Cohen — shines through his beard and tendrils. In a chaste film with neck-to-toe costumes, there is a surprising amount of heat displayed between Yochay and Esther as well as — rather flirtatiously — with Yochay and Shira.

Gentle humor creeps in occasionally, such as when an elder rabbi is required to give an insistent lonely older woman advice on buying a new stove. The setting might be shut off from outside influences, but its ending leaves the door open for interpretation and post-viewing discussion — just as the best sort of movie-going experiences often do. 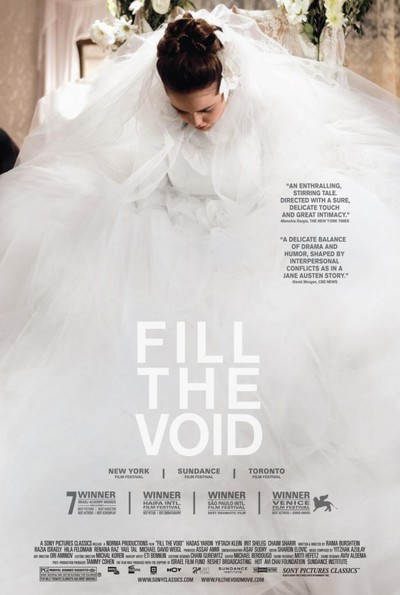