A Reappraisal of Oliver Stone's "Alexander: The Ultimate Cut"

When "Alexander," Oliver Stone's epic biopic chronicling the life and accomplishments of Alexander the Great, arrived in theaters in late 2004, it was the culmination of a long-cherished dream of the controversial filmmaker to bring the story of the controversial conquerer to the big screen that at one point even found him fending off a competing film on the subject that was to have been directed by Baz Luhrmann with Leonardo DiCaprio in the lead. That dream quickly turned into a nightmare as the resulting film was savaged by critics for being a miscast muddle and ignored by audiences that had turned out to see similarly themed films like "Gladiator" and "Troy" in droves. Even Colin Farrell seemed to turn against it when, a week after its release, he appeared on "Saturday Night Live" and cracked a nasty joke about the film in his monologue. 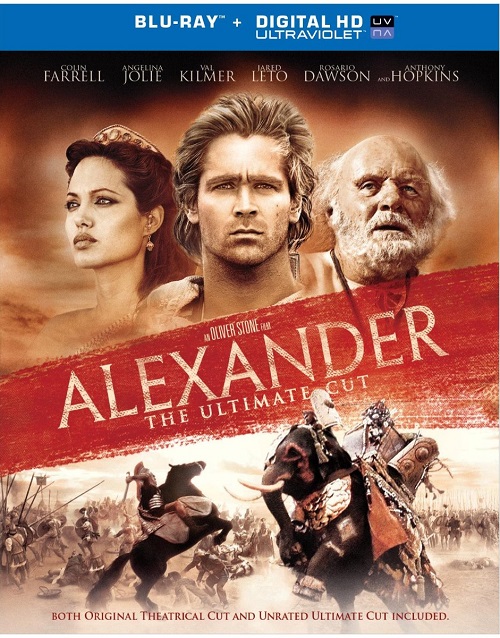 In short, the film was a flop (though it would eventually make back its production costs). Under ordinary circumstances, it might have simply been forgotten by all but collectors of massive cinematic disasters. However, even as he was reestablishing his career with such films as "World Trade Center," "Wall Street: Money Never Sleeps" and "Savages," it appeared as Stone was unwilling to simply let "Alexander" fade into the mists of misbegotten screen history. In 2005, when the film, which originally ran for 175 minutes arrived on DVD, Stone prepared a "Director's Cut" that saw him restructure some elements, delete 25 minutes of footage and add 17 minutes of unseen scenes into a 167-minute version that was actually shorter than the original. And yet, Stone still couldn't get the story out of his system and in 2007, he released a so-called "Final Cut" that replaced the deleted 25 minutes along with another 40 minutes of additional scenes making their debut in a version that, after the trimming of some now superfluous material, now clocked in at 214 minutes.

With the film's 10th anniversary approaching, Stone has returned to the project that has obsessed him for nearly two decades with "Alexander: The Ultimate Cut," a 207-minute-long refinement of the "Final Cut," which he promises will be his final say on the subject and was recently released on Blu-ray. Even in a film culture in which there are at least five separate cuts of "Blade Runner" floating around, this might seem at first blush to be overkill on Stone's part and begs the question of whether this new and final version can possibly rehabilitate the terrible reputation that the film has been carrying around since its initial release. The various expansions and rejiggerings have improved it immeasurably, and what was once a head-scratching mess has reformed into an undeniably fascinating example of epic cinema. 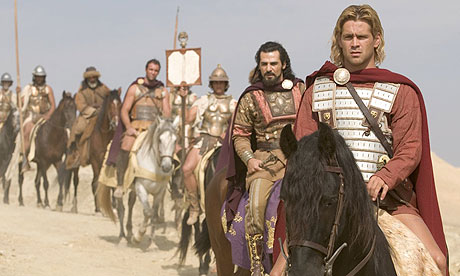 Like many observers at the time of its original release, I thought that Stone had stumbled badly with "Alexander" in ways that almost defied reason. The essentially straightforward narrative was a surprisingly safe choice for a filmmaker who was usually more inventive. The one major diversion from the chronology—a lengthy flashback to the murder of Alexander's father, King Phillip of Macedonia (Val Kilmer), that lead to his ascension to the throne—came so late in the proceedings and lasted so long that it felt like an afterthought and brought the whole thing to a dead halt. The narration by the elderly version of Ptolemy (Anthony Hopkins), one of Alexander's trusted aides, felt like something tacked on to help guide viewers who might not be versed in the particulars of the subject at hand. Having suggested that his film would deal in a straightforward manner with Alexander's bisexuality, Stone chickened out on the man-on-man aspect by eliminating all but a couple of brief, longing glances between Alexander and his childhood friend Hephastion (Jared Leto), while emphasizing a hot and heavy sex scene between him and bride Roxane (Rosario Dawson) and the sexual tension between him and his mother Olympias (an aspect underlined by casting Angelina Jolie as the hero's mother despite being only a year older than Farrell).

Most of all, "Alexander" wasn't a big enough film to do proper justice to its subject. Instead of giving viewers time to get to know the characters and to fully absorb the wealth of historical details on display, the film hurried along from incident to incident while reducing the character-driven material to such a degree that there were large stretches in which it was hard to understand what was going on. As for the battle scenes, they often felt choppy and disorganized and failed to illustrate either the savagery of the combat (this was not helped by the addition of some fairly cartoonish-looking CGI gore) or the tactical brilliance that led Alexander to one stunning victory after another. The whole thing just felt small, in scope if not in scale, and if ever there was a cinematic subject that required a certain heedless grandeur, it is Alexander the Great.

Nearly all of these flaws have been addressed through Stone's tweaks over the years. While "Alexander: The Ultimate Cut" may still have some problems that no amount of reediting or restructuring can overcome, it is now an incontestably better work than it once was and deserves to be considered as the proper version of the film in the way that the full length "Heaven's Gate" is now regarded after its years in the cinematic wilderness. For starters, it now feels like the epic it was always meant to be—at 207 minutes (complete with an intermission), it finally has time to breathe and to allow viewers to acclimate themselves to the surroundings. More importantly, the additional running time allows Stone to more fully flesh out his characters so that we get a better understanding of who they are and what they are hoping to accomplish. Oddly enough, even though this version of "Alexander" is considerably longer than the original, it actually feels shorter because the scenes now have a proper rhythm. The only downside is that even though it is now a movie that begs to be seen on the big screen, virtually anyone who wishes to see it will have to make do at home. (I know it will never happen but it would be wonderful if Warner Brothers were to actually show this in a few theaters as a throwback to the old roadshow days and to allow it to be seen under the most ideal circumstances.)

Instead of the straightforward chronology, Stone has restructured the narrative. After a flash-forward to Alexander's death and some historical ground-laying from Ptolemy, the story proper begins with a lengthy depiction of Alexander's historic triumph over the Persians in the Battle of Gaugamela. The victory would make him a living legend throughout the world (its a stunner of a sequence, despite the awkward CGI gore effects) before establishing a pattern in which his accomplishments are underscored with extended flashbacks to his younger days that illustrate how he developed as a thinker, a warrior and as a person.

It may seem confusing at first blush, especially if you have never seen the film before in any version, but by employing a more impressionistic structure rather than a more traditional approach, it plays a lot better in the way that it focuses on certain aspects rather than trying to cram all the details of Alexander's life into one narrative—a feat that would be impossible even at twice the running time. Another benefit of this take is that it makes things a little more accessible to those viewers with little working knowledge of Alexander and his story, by immersing them in it rather than by rattling off  facts and hoping that they retain everything. 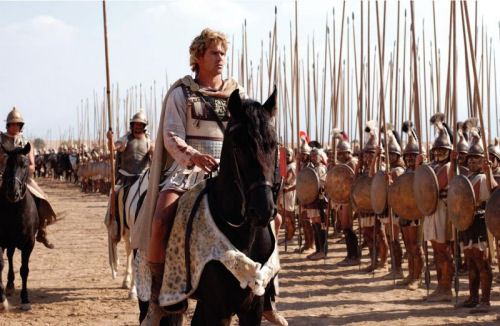 The narration by Ptolemy is also much more effective this time around, partly because it no longer feels like a desperate stopgap measure and partly because it now reveals itself more clearly as a way for Stone to get one of his key points across, the fact that history as we know it has always been an interpretation of the facts rather than a straight recitation of them. Right from the start, as Ptolemy is reciting Alexander's history 40 years after his death, he claims that such time was needed for him to get a real grip on who Alexander was and even then admits that the events he describes are as how he has chosen to interpret them. Instead of depicting the historical truth (which would be an impossibility), Stone tries to show how a historical record is formed and how who tells the tale is as important as the tale itself. Heard in this light and no longer bearing the onus of carrying people from point A to point B, the narration plays a lot better.

Alexander's attraction to men, a facet of his personality that was downplayed the first time around, has been greatly expanded here. Most of this comes through the character of Bogaos (Francisco Bosch), a servant that Alexander takes under his wing (among other things) after encountering him in Babylon, to the consternation of both Hephastion and Roxane. In the original version, he is barely glimpsed. He's a much more significant presence in the Ultimate Cut. Hephastion and Roxane are also deepened through their reactions to Bogaos' relationship with Alexander.

Though Stone has never been lauded as the most sensitive of filmmakers when it comes to dealing with gay-themed material, it works here precisely because of the matter-of-fact way in which he looks at it without any sense of luridness. The restoration of this material also lends additional shadings to Colin Farrell's performance. The added scenes better illustrate the balance between the character's aggressiveness and sensitivity—emotional poles that together helped to forge a unique leader.

This is not to say that "Alexander: The Ultimate Cut" is a total vindication of every single aspect of Oliver Stone's vision. Some of the dialogue is a little clunky at times, the wealth of historical detail is so overwhelming that it is still possible to get lost at times and some of his stylistic choices (such as requiring most of his actors—most notoriously Val Kilmer—to adopt odd Irish accents so as to fall in line with Farrell, who was unable to drop his, and the decision to tint much of the footage of what would be his final battle in India to suggest the unfamiliar chaos surrounding him) are just plain strange (and don't get me started on Farrell's historically accurate but goofy-looking hair).

And yet, the film, especially in its current version, has plenty of good things going for it—exciting battle sequences, a thought-provoking approach that tries to look at Alexander through ancient and contemporary eyes and a memorable supporting turn from Angelina Jolie. (Some have accused her of going over-the-top, but when you're playing a snake-obsessed queen with an unnatural fondness for a son you believe was fathered by Zeus himself, you don't want to undersell the part.) At its best moments, such as Alexander's speech before the Battle of Gaugamela and his heroic horseback charge against an elephant during the final fight in India, the movie packs the kind of grandly glorious punch that few filmmakers would dare to attempt, and that even fewer could successfully pull off.

"Fortune Favors The Bold" are the words that kick off "Alexander" and while it may have taken nearly a decade for it to happen, the boldness of both the film and its creator can finally be fully appreciated.