You say goodbye and I say hello

They don't teach cinematic grammar in elementary schools, though they ought to. But somehow kids understand it anyway -- even before they understand spoken and written language. David Bordwell ponders this mystery in a post about final shots called "Molly wanted more," in which he describes a friend's three-year-old daughter crying out for "More!" as Snow White and the prince ride off into the sunset at the end of Disney's 1937 "Snow White and the Seven Dwarfs."

"How could she know, on her first pass, that the story was ending?" he wonders. Using examples from "Snow White," "The Wild One" and "The Silence of the Lambs," among others, DB examines one of the conventions for entering and exiting movie stories, in which we move in on the characters (or they approach us) at the beginning and pull back (or they move away from us) at the end:

Thanks to the visual nature of movies, the widening or closing-off of the story world can mimic the act of our entering or backing out of a tangible situation. That's what we see in "Snow White" and my other examples. In a sense we greet the characters, and after spending some time with them we bid them farewell. [...]

... The entry/ leave-taking pattern mimics our activities as perceiving, socially inclined people. For creatures like us, to encounter a new situation or setting simply involves approaching it or letting it approach us, then becoming part of it and fixing our attention on its details. At a party, we amble closer to a knot of people we want to talk with, or someone comes up to us. Sooner or later that encounter ends or trails off, and we withdraw or turn away or watch when others depart. More poignantly, the extreme long-shot option can recall moments when a car or bus or train carried us away from our loved ones. In any case, thanks to moving images the salient features of this very common experience can be made tangible for viewers.

This convention, we might say, is just natural. Molly, who had already logged three years of social experience, could plausibly make the analogy with ease. She recognized that her encounter with the world of Snow White was coming to an end-the characters were leaving her-and could express her regret.

You can see why I, as the creator and proprietor of the Opening Shot Project (devoted to examining the various ways, conventional and unconventional, that movies set up their stories, and often suggest how they will end), would find all this fascinating. (And I can't resist the opportunity to remark that the series of dissolves that move in on Xanadu at the beginning of "Citizen Kane" were inspired by the similar approach to the castle at the start of "Snow White.")

What are some of the other cues Molly might have been responding to? I can think of a few possibilities: 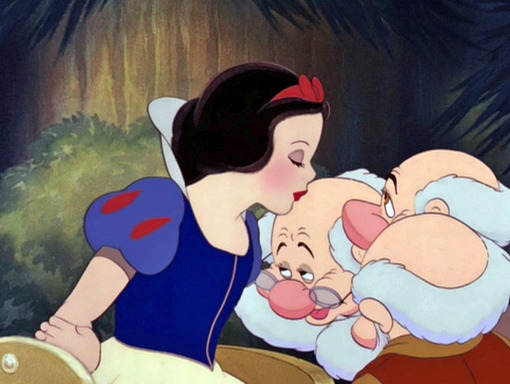 1) As DB notes, the ending of the movie mirrors social conventions Molly is already familiar with. Indeed, after the Prince awakens Snow White with a kiss (to the swelling music of the movie's most recognizable song, the waltz "Someday My Prince Will Come"), he places her on a horse and she says her goodbyes, kissing each of the dwarfs, waving, and repeatedly chirping, "Goodbye!" Molly no doubt knows what kissing and waving goodbye means. And, sure enough, the "camera" stays behind as Snow and her Prince recede toward the distant castle in the clouds. Bye-bye! 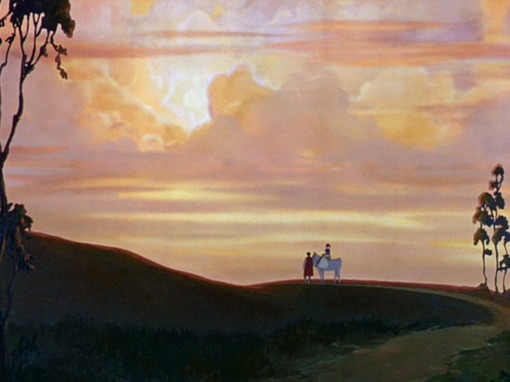 2) Molly probably also senses that, since stories in books have to end somewhere, they tend to do so not in the middle of the action, with the characters' situations left unresolved, but after there's some kind of closure. That doesn't mean there's nothing left to say about the characters but that "They Lived Happily Ever After..." (that would preclude sequels!), or that every loose end is necessarily tied up, but that the major dilemmas have reached some kind of resolution: the evil narcissistic Queen is killed, Snow White is awakened by a kiss from the Prince who loves her, and her friends the dwarfs and forest creatures all celebrate. (As DB points out, the Disney "Snow White" actually begins and ends with the opening and closing of a storybook, but Molly's "More!" happened before the closing of the book.) 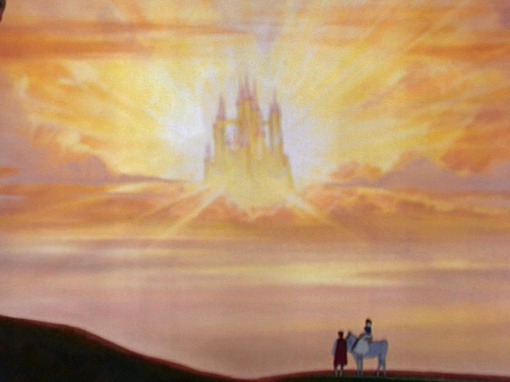 3) The previously mentioned swelling of the music -- and the entrance of the heavenly chorus -- is another signal Molly would surely be capable of decoding. It unquestionably feels like the grand finale of something. Perhaps it's like the way we might sense a sonata-form symphony winding up and returning to its dominant key, even if we can't read sheet music. It just feels... complete.

In the olden days (say, the 1970s and 1980s), those of us who like to sit in the front rows of movie theaters (I prefer the third or fourth, generally) could tell the final shot of a movie simply by the graininess of the film emulsion. (I doubt Molly knows from emulsion.) The optical printing of the end titles over the last shot often made it appear grainier, flatter -- and sometimes slightly washed out. Frankly, I kind of miss that texture nowadays. Digital end credits leave no granular traces.

I wonder what Molly would make of a more recent trend in movie endings -- the sudden cut to black that concludes films like Stanley Kubrick's "Eyes Wide Shut," Joel & Ethan Coen's "No Country for Old Men" and "A Serious Man," Ramin Bahrani's "Man Push Cart" ... and, of course, the final episode of "The Sopranos." These exquisitely chosen finishes are note-perfect (with one possible exception¹) and make absolute sense to (most) adults, but none of them is intended for three-year-olds.

One of my favorite movies, Roman Polaski's "Chinatown," ends with the classic pull-away crane shot (the one that got Johnny LaRue in so much trouble with Guy Cabellero in the SCTV Movie of the Week remake, "Polynesiantown"). In "The Long Goodbye," Robert Altman has his Philip Marlowe (Elliott Gould) simply walk away at the end -- to the strains of "Hooray for Hollywood," just to remind us of the convention. Altman ends "Nashville" by tilting up to the sky, and "3 Women" by panning to the left and settling on a pile of tires -- not because there's any deep meaning but because that's the end. There's nothing more for the camera to look at.

What other picture-ending conventions might be appreciated by a three-year-old -- or only by adults? What are some of your favorites, or least favorites, and why?

¹ I think "Eyes Wide Shut" is a magnificent horror-comedy -- a companion piece to "The Shining" and maybe Preston Sturges' "Unfaithfully Yours"? -- but the final punch line strikes me as a little too on-the-nose cute.