When Peter Bogdanovich needed a movie to play as the final feature in the doomed small-town theater in “The Last Picture Show,” he chose Howard Hawks' “Red River” (1948). He selected the scene where John Wayne tells Montgomery Clift, “Take 'em to Missouri, Matt!” And then there is Hawks' famous montage of weathered cowboy faces in closeup and exaltation, as they cry “Hee-yaw!” and wave their hats in the air.

The moment is as quintessentially Western as any ever filmed, capturing the exhilaration of being on a horse under the big sky with a job to do and a paycheck at the other end. And “Red River” is one of the greatest of all Westerns when it stays with its central story about an older man and a younger one, and the first cattle drive down the Chisholm Trail. It is only in its few scenes involving women that it goes wrong.

The film's hero and villain is Tom Dunson (Wayne), who heads West with a wagon train in 1851 and then peels off for Texas to start a cattle ranch. He takes along only his wagon driver, Groot Nadine (Walter Brennan). Dunson's sweetheart, Fen (Coleen Gray), wants to join them, but he rejects her almost absentmindedly, promising to send for her later. Later, from miles away, Tom and Groot see smoke rising: Indians have destroyed the wagon train. Groot, a grizzled codger, fulminates about how Indians “always want to be burning up good wagons,” and Tom observes that it would take them too long to go back and try to help. Their manner is surprisingly distant, considering that Dunson has just lost the woman he loved.

Soon after, the men encounter a boy who survived the Indian attack. This is Matt Garth, who is adopted by Dunson and brought up as the eventual heir to his ranch. Played as an adult by Montgomery Clift (his first screen role), Matt goes away to school, but returns in 1866 just as Dunson is preparing an epic drive to take 9,000 head of cattle north to Missouri.

I mentioned that Dunson is both hero and villain. It's a sign of the movie's complexity that John Wayne, often typecast, is given a tortured, conflicted character to play. He starts with “a boy with a cow and a man with a bull,” and builds up a great herd. But then he faces ruin; he must drive the cattle north or go bankrupt.

He's a stubborn man; all through the movie people tell him he's wrong, and usually they're right. They're especially right in wanting to take the cattle to Abilene, which is closer and reportedly has a railroad line, instead of on the longer trek to Missouri. As the cattle drive grows grueling, Dunson grows irascible, and finally whiskey and lack of sleep drive him a little mad; there are attempted mutinies before Matt finally rebels and takes the cattle to Abilene.

The critic Tim Dirks has pointed out the parallels between their conflict and the standoff between Capt. Bligh and Fletcher Christian in “Mutiny on the Bounty.” And indeed, the Borden Chase screenplay makes much of the older man's pride and the younger one's need to prove himself.

Also established, but never really developed, is a rivalry between young Matt and a tough cowboy named Cherry Valance (John Ireland), who signs up for the cattle drive and becomes Matt's rival. There's gonna be trouble between those two, old Groot predicts, but the film never delivers, leaving them stranded in the middle of a peculiar ambivalence that drew the attention of “The Celluloid Closet,” a documentary about hidden homosexuality in the movies. (“You know,” Cherry says, handling Matt's gun, “there are only two things more beautiful than a good gun: a Swiss watch or a woman from anywhere. You ever had a Swiss watch?”)

The shifting emotional attachments are tracked by a silver bracelet, which Dunson gives to Fen before leaving her. It later turns up on the wrist of an Indian he kills, and Dunson then gives it to Matt, who later gives it to Tess Millay (Joanne Dru), a woman he rescues and falls in love with. The three scenes with Tess are the movie's low points, in part because of her prattle (listen to how she chats distractingly with Matt during an Indian attack), in part because she is all too obviously the deus ex machina the plot needs to avoid an unhappy ending. The final scene is the weakest in the film, and Borden Chase reportedly hated it, with good reason: Two men act out a fierce psychological rivalry for two hours, only to cave in instantly to a female's glib tongue-lashing.

What we remember with “Red River” is not, however, the silly ending, but the setup and the majestic central portions. The tragic rivalry is so well established that somehow it keeps its weight and dignity in our memories, even though the ending undercuts it.

Just as memorable are the scenes of the cattle drive itself, as a handful of men control a herd so large it takes all night to ford a river. Russell Harlan's cinematography finds classical compositions in the drive, arrangements of men, sky and trees, and then in the famous stampede scene he shows a river of cattle flowing down a hill. It is an outdoor movie (we never go inside the ranch house Dunson must have built), and when young Matt steps inside the cattle buyer's office in Abilene, he ducks, observing how long it's been since he was under a roof.

Hawks is wonderful at setting moods. Notice the ominous atmosphere he brews on the night of the stampede--the silence, the restlessness of the cattle, the lowered voices. Notice Matt's nervousness during a night of thick fog, when every shadow may be Tom, come to kill him. And the tension earlier, when Dunson holds a kangaroo court.

And watch the subtle way Hawks modulates Tom Dunson's gradual collapse. John Wayne is tall and steady at the beginning of the picture, but by the end his hair is gray and lank, and his eyes are haunted; the transition is so gradual we might not even notice he wears a white hat at the outset but a black one at the end. Wayne is sometimes considered more of a natural force than an actor, but here his understated acting is right on the money; the critic Joseph McBride says John Ford, who had directed Wayne many times, saw “Red River” and told Hawks, “I never knew the big son of a bitch could act.”

Between Wayne and Clift there is a clear tension, not only between an older man and a younger one, but between an actor who started in 1929 and another who represented the leading edge of the Method. It's almost as if Wayne, who could go over a flamboyant actor, was trying to go under a quiet one: He meets the challenge, and matches it.

The theme of “Red River” is from classical tragedy: the need of the son to slay the father, literally or symbolically, in order to clear the way for his own ascendancy. And the father's desire to gain immortality through a child (the one moment with a woman that does work is when Dunson asks Tess to bear a son for him). The majesty of the cattle drive, and all of its expert details about “taking the point” and keeping the cowhands fed and happy, is atmosphere surrounding these themes.

Underlying everything else is an attitude that must have been invisible to the filmmakers at the time: the unstated assumption that it is the white man's right to take what he wants. Dunson shoots a Mexican who comes to tell him “Don Diego” owns the land. Told the land had been granted to Diego by the king of Spain, Dunson says, “You mean he took it away from whoever was here before--Indians, maybe. Well, I'm takin' it away from him.” In throwaway dialogue, we learn of seven more men Dunson has killed for his ranch, and there's a grimly humorous motif as he shoots people and then “reads over 'em” from the Bible.

Dunson is a law of his own, until Matt stops a hanging and ends his reign. If all Westerns are about the inevitable encroachment of civilization, this is one where it seems like a pretty good idea. 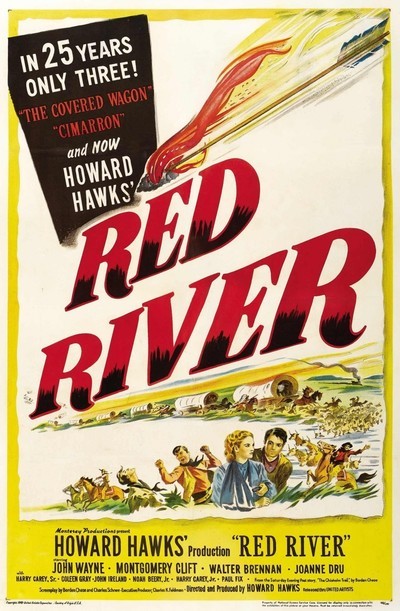