Is this man a "torture pornographer"? Strike that. Is he a "failure"?

I saw your article on "Torture Porn," and while I disagree with you about your criticism of my film, I would like you to back up how "Hostel II" is a failure, a claim you repeatedly make. While the film did not do what the first film did at the box office, (which was a total shock to everyone - myself included) "Hostel II" cost only $10 million dollars to make, and is currently at $30 million dollars worldwide box office, with many territories left to open. How many other films this summer have earned triple their production budget in their theatrical run? Are those films failures as well?

Critically, your comments were that I had MTV style editing and a lack of character development. What, exactly, are you talking about? "Hostel II" has barely any flashy cuts or MTV-style editing, and the first 45 minutes of the movie is all character development with almost zero on screen violence. Heather Matarazzo's torture scene doesn't happen until nearly 50 minutes into the movie. 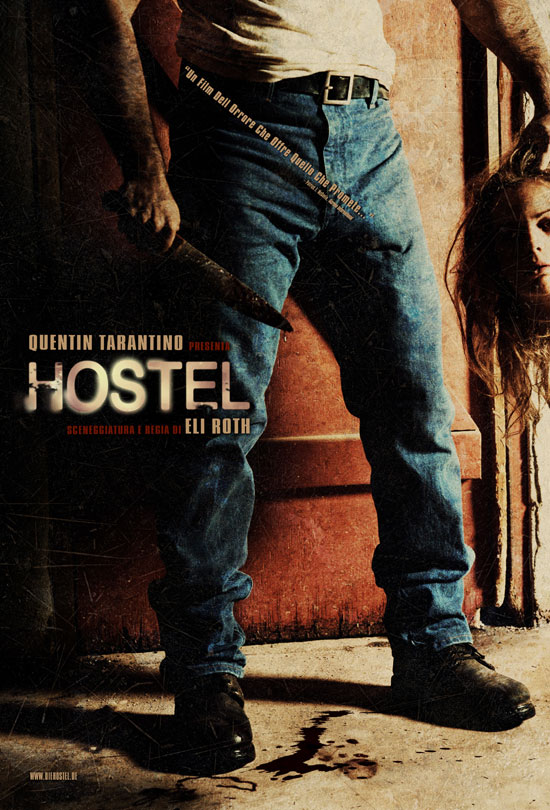 One of the milder posters for "Hostel Part II" -- this one from Italy.

It sounds to me like you are jumping onto some kind of 'anti-violence' crusade without actually watching the film, when if you looked closely, you'd see that my film actually has a very strong anti-violence moral core. Writers I respect such as Stephen King, Elvis Mitchell, and writer/Attorney Julie Hilden, a former clerk for supreme court Justice Breyer, praised the film specifically for its anti-violence message and skilled filmmaking (http://writ.news.findlaw.com/hilden/20070716.html) and in Europe the major critics hailed the film for its political messages against corporations that profit from the death of Americans.

My films are not for everyone, and many critics dismissed the film because of the violent scenes, which is the very thing horror fans are paying for when they see a film like "Hostel II." But to lump my film in with other films that may be ripping off a trend for "MTV editing" and "lack of character development" shows more of a reflection of your lack of understanding as a critic and a desire to be seen as a 'moral person' than an actual critique of my film.

It also happens that [Ryan Rotten is] yet another one of these internet 'critics' I've seen kicking around the horror scene for years who have told me numerous times how they really want to write and direct, and probably are not writing the most objective reviews. Did you bother to talk to anyone actually involved in the movie before you pronounced it a 'failure?' and saying it 'tanked' Because failure in my book is someone who lives in the safety of their laptop taking shots at those who actually achieved what they have been unable to do.

Many people had their knives out for me long before my film opened, simply because of who I am and the nature of my films. They will tell you "Hostel II" is a failure no matter what, despite the fact we are into profits before we come out on DVD, which is a rare feat for almost any film released theatrically. I made the film I wanted the way I wanted, with risky subject matter and a superb cast who are not (yet) major box office stars, got it released in theaters all over the world, and turned a profit before our theatrical run was finished. If that's not success, then we should all be so lucky to have 'failures' like "Hostel Part II" in our careers.

For clarification: Box Office Mojo reports that "Hostel Part II" grossed $17.6 million at the domestic box office, and nearly $30 million worldwide. The film took in 46.6 percent of its domestic total in its first weekend ($8.2 million -- 2,350 screens; $3,490 per-screen average), dropping 63 percent in its second weekend, 70 percent in its third, and 84 percent in its fourth.

As I wrote back in March (echoed by this New York Times piece from yesterday):

It's not uncommon for a movie's grosses to plummet by 50 or 60 percent in the second weekend. Is that because of negative reviews? No. Is it because people who have seen the movie don't like it, and tell their friends? Not necessarily. In many instances, this is by design. It's because the hype has been so effective, and the movie available on so many screens, that most of the people who would be interested in seeing that particular movie already bought their tickets on the first weekend. One reason for staggering showtimes across multiple mall-tiplex screens is so that, if one showing in theater 3 sells out, ticket-buyers aren't turned away; they just have to wait around another 20 minutes for the next show in theater 12.

In fact, according to BoxOfficeMojo.com, "300" dropped 56.3 percent in its second weekend (even though it bulked up with an additional 167 screens, the box-office equivalent of steroids); "Ghost Rider" was off 55.8 percent in weekend number two; and "Norbit" was down 50.9 percent. Put another way: "Hostel," the top-grossing hit of January, 2006, did 41.3 percent of its total domestic gross in its first three days. It lasted only 39 more days in theaters. But, for the "distribution gurus," a flash-in-the-pan is a good thing. A modern major movie release has a planned obsolescence (of about six to eight weeks) built in to its distribution and marketing strategy from the start. The idea is the same as fast food. It's all about turnover: Push last weekend's movies out to make room for next weekend's Number One Box-Office Champ!

After its superstrong $182 million opening week in May, “Spider-Man 3” plunged at the box office by 61 percent the next week. “Pirates of the Caribbean: At World’s End” sank like a stone in its second week, dropping 66 percent. And when the box office gross for “Transformers” fell by only 47 percent after a week in theaters, Hollywood marveled at the movie’s strength.

The movie business has been heading this way for years, but this summer is proving the apotheosis of the one-week blockbuster. The blur of big-budget films may have left moviegoers with whiplash, given how quickly each film announces itself in television ads and then disappears from marquees, yet few in Hollywood are complaining. Far from it, since the steep drop-offs are largely fueled by a run of blockbusters from every major studio, and Hollywood has a chance of breaking 2004’s summer box office record.

The blockbuster onslaught has been driven partly by a shift in the way studios and theater chains divide up box office receipts. Until several years ago, most of the grosses went to the studios initially, but theaters benefited more the longer a film played. As a result, megaplex owners had a financial disincentive to play a new movie on too many screens.

Now studios and theater chains typically agree on a flat percentage split, no matter how long a movie plays. So “Pirates,” “Spider-Man 3” and “Shrek the Third,” for example, each opened on more than 10,000 screens in May.

“We don’t care anymore whether we generate revenue in the first week, the third or the fifth,” said Mike Campbell, chief executive of Regal Cinemas, the nation’s biggest theater chain.

With cinemas freed to put each week’s new blockbuster on enough screens to offer show times every 20 minutes, the pressure on studios to deliver huge opening weeks has reached new proportions....