"Shrek the Third" is a damped-down return to the Kingdom of Far Far Away, lacking the comic energy of the first brilliant film and not measuring up to the second. From the thrills of dragon-slaying and damsel-rescuing, Shrek's challenges have been reduced to a career decision: Should he become the king?

The movie is as visually enchanting as the first two in the series, and the big green ogre (voice of Mike Myers) is as gentle and lovable, but the movie settles for action that it trusts is funny, instead of aiming for comedy itself. Another peculiarity is that the plot will probably not be engaging for younger audience members, who understand dragons but don't care that uneasy lies the head that wears a crown. Shrek spends too much time in lachrymose conversation with his bride Fiona (voice of Cameron Diaz) and pondering the challenge of fatherhood, and not enough time being an ogre.

Indeed, Shrek is the only character in the movie who makes a big deal about his ogrehood. The king and queen (voices of John Cleese and Julie Andrews) have long since embraced their son-in-law, and on his deathbed, the frog king reveals that Shrek is an heir to the throne — one of two, including the feckless Artie (voice of pop star Justin Timberlake). Shrek demurs, preferring life back in the swamp in what Fiona describes as his "vermin-filled shack."

Why would Fiona, raised as a princess, accept life in such a dreary mire of despond? Recall from "Shrek" (2001) that she was a conventional princess only by day, and became an ogre after nightfall. When she was rescued from marriage to Lord Farquaad with Shrek's kiss, she became an ogre full-time. Before that she was a human, I guess, although her father was a frog. Inter-species reproduction is so common in Far Far Away that it makes irrelevant such questions as whether Kermit and Miss Piggy ever had sex. Remember that the dragon and Donkey fell in love in the first film. For someone like me who has never understood how birds and snakes do it, thoughts of their marital adventures boggles the mind.

Back again this time are the two supporting stars from the earlier films, Donkey (voice of Eddie Murphy) and Puss in Boots (voice of Antonio Banderas). But they're reduced to being friends and traveling partners and are never really foregrounded. At one point, magically, they switch bodies and talk in each other's voices, but that's what it amounts to: They talk in each other's voices. Such a thing is not intrinsically funny, unless it is plot or character-driven. Little really depends on it or comes from it, except for a weak little sight gag at the end. Since Murphy's vocal riffs and improvisations have been so inspired earlier in the series, we want more of him this time, not less.

Shrek, Fiona, Donkey and Puss have to sail to the land of Worcestershire to find Artie, and also encounter Prince Charming (voice of Rupert Everett), who is reduced from princehood to (in an opening scene) performing in dinner theater. Fairly arbitrary developments produce a team of heroines (Cinderella, Snow White, Sleeping Beauty) who are sort of Charlie's Angels, I guess, although they provide the movie with too many characters and not enough for them to do. In the first film, they were a sly Dreamworks dig at Disney and were dumped, as obsolete, in Shrek's private swamp.

Indeed, the movie practices such economy of characters that the Gingerbread Man and the Three Blind Mice turn up again — unwanted, if you ask me. What's the use of Three Blind Mice if you can't see them run? And although I have been trained to accept talking animals, living pastries fail to engage me.

I learn from Variety that there will be a fourth "Shrek" and a Broadway musical, and I hope both return for their inspiration to the original "Shrek." That film did so much with the outsider status of an ogre, and Shrek's painful uncertainties about his role in non-ogre society. It involved intolerance and prejudice and courage, and had real stakes. And it was funny. And had great action scenes, like Shrek's rescue of Fiona. Now everybody in the Land of Far Far Away acts as if we (and they) have seen the first two films.

The movie's always a pleasure to watch for its skilled animation. But it lacks truly interesting challenges. It makes the mistake of thinking slapstick action is funny for its own sake, a mistake made by a lot of Saturday-morning TV cartoons. True, characters zooming and bouncing around are easy to write because no creative invention is required to set them in motion. But so what? 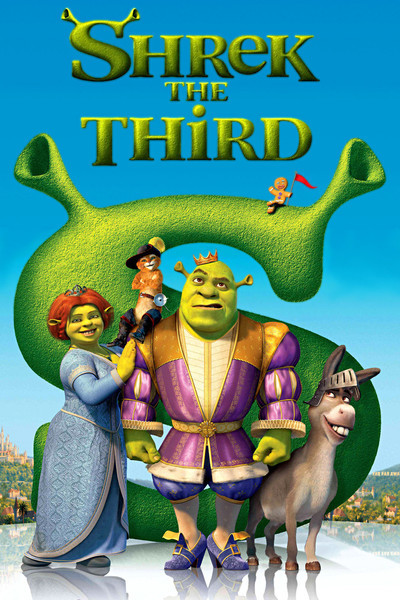 Antonio Banderas as Puss in Boots

Julie Andrews as The Queen

John Cleese as The King