Wally Pfister, The Avengers & the ethics of composition

Maybe it's a DC vs. Marvel thing. But it's all over the Internet: Wally Pfister, ASC, BSC, the Oscar-winning cinematographer best-known for his work with director Christopher Nolan (the "Dark Knight" movies, "The Prestige," "Inception") took a swipe at rival superhero blockbuster "The Avengers," while admitting that he doesn't much care for the genre anyway. In an interview with the Sarasota Herald Tribune, Pfister was asked "What's most important in shooting a film?" He responded with... something that has since been removed from the newspaper's website but still shows up in the Google Cached version (screenshot below):

"What's really important is storytelling. None of it matters if it doesn't support the story. I thought "The Avengers" was an appalling film. They'd shoot from some odd angle and I'd think, why is the camera there? Oh, I see, because they spent half a million on the set and they have to show it off. It took me completely out of the movie. I was driven bonkers by that illogical form of storytelling."

Well, you're not really going to get an argument from me, seeing as how I've criticized Pfister and Nolan's work in their Batman trilogy and "Inception" on similar grounds -- putting the camera in the wrong place (or, if you prefer, a less-than-optimal place) to best tell the story. (I think Pfister's best work was in "Moneyball," which he says he insisted on shooting on film, a format Nolan also favors over current digital technology.) 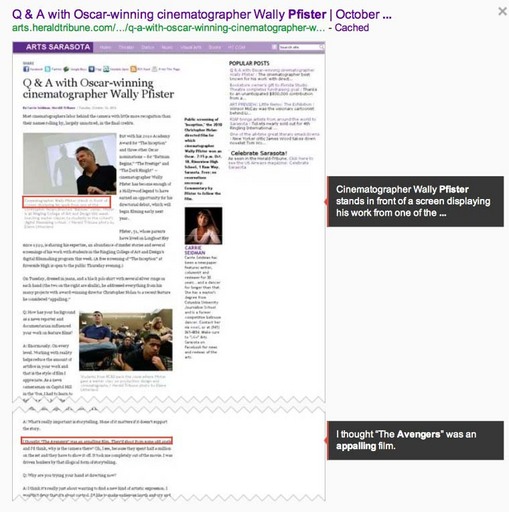 I feel about this interview the way I feel about watching the presidential debates: I wish I could ask follow-up questions. But all we have to go on is what was printed (and we no longer even have all of that), so let's parse: Certainly "The Avengers" (directed by Joss Whedon, photographed by Seamus McGarvey, production design by James Chinlund) isn't exactly a handsome picture, like "The Dark Knight" or "The Prestige." (And certainly not a magnificently photographed one, like some of those shot by the late Harris Savides: "Birth," "Zodiac," "Elephant" -- and artist who, like Pfister, greatly admires the legendary Gordon Willis, aka the " Prince of Darkness.")

But perhaps what it comes down to is that Pfister dislikes digital photography and hates CGI -- and some of the best visual moments in "The Avengers" depended heavily on both, which I thought (in a few specific instances) were used rather well. (I wrote about two of my favorite shots here.) Pfister, who was in Sarasota giving a master class in production design and cinematography at the Ringling College of Art and Design, says he likes photographing real light in real space:

The other important thing is that it really and truly teaches you a respect for natural light. Before you can know how to place a light, you have to understand natural light. You don't need technology to have a good eye and an appreciation of the beauty of natural light. Go buy a book on Carvaggio or any of the Dutch Masters. To me, that's beautiful lighting and it's all natural and from 500 years ago.

I'm with him on that score. As I've said many times, I believe that the essence of cinema is photography: looking at the world through a lens and putting a frame around what you see and want to show (Scorsese again: ""Cinema is a matter of what's in the frame and what's out.") Once you start creating light instead of capturing it (whether on film or digitally), you may still have art (animation, graphic design) but it's no longer photography. So maybe that's what Pfister didn't like about the visual texture of "The Avengers": too much animation, not enough cinema.

But let's get back to what Pfister said about camera placement, assuming there's really a camera involved. Designing a shot, or a set, to show off the production's resources is in the grand tradition of Hollywood showmanship. It's called "putting the money on the screen," and there's nothing inherently wrong with that -- or with demonstrating an air of self-conscious playfulness in your choices. I'm not sure what shots Pfister is talking about in "The Avengers" (excuse me, "Marvel's The Avengers"), but he says they "took [him] completely out of the movie," and that can become a real problem. I sympathize. I've criticized Pfister and Nolan for putting the camera in places that distracted me because I wanted to see more and the movie was holding back. (As in the shots of the bus leaving the bank or inside the back of the van in "The Dark Knight," where simply moving the camera back, or a little in one direction to show another wall, would have made a significant difference in how the space was perceived.) I know many people weren't bothered in the least, but that's something that throws me out of a movie. 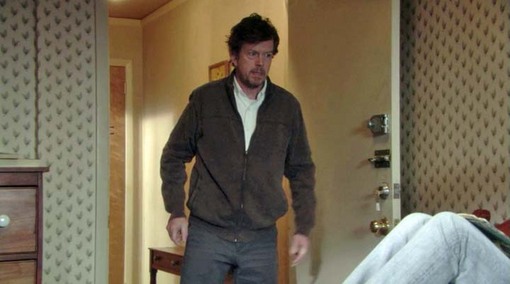 Something else that drives me to distraction is when the frame is used to cheat space. You've seen it, particularly in bad horror movies, where a shot is framed to conceal information from the audience that would have been perfectly obvious to the characters onscreen. You're immediately made aware that you, the viewer, are being deliberately excluded -- not by the story or the characters, but by the movie itself. I hate that, and I saw a particularly egregious example of it recently in an episode from the fourth season of "Damages" (a kinda trashy show with a star-studded that I've been catching up on via Netflix). The show, in which Glenn Close and Rose Byrne play ruthless lawyers, is built around flashbacks and flash-forwards in which the audience is given only fragments of the narrative, dispensed throughout the season, until it's all assembled in the finale.

Dylan Baker, as a CIA op, has been keeping a Mystery Person, probably illegally extracted from Afghanistan, in an upstairs room in his safe house. We've seen him go in there several times, bringing food, but have never seen who the captive is, because that person has been deliberately framed out. Now, this is not such a bad thing in and of itself, as long as, say, you keep the camera outside the room. Maybe you see only what someone down the hallway would see when this guy opened the door. But in this case we're shown the characters' knees in the lower right corner -- and still the scene ends without showing who it is. You can't put the camera right next to the person, show somebody else looking right at him/her in the same room, and get away with that. It's not very nice. And, also, it's a violation of spacial integrity, as well as the audience's trust. 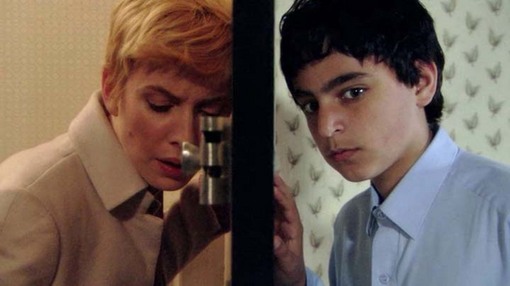 If you'd been paying attention to "Damages" thus far (this is the seventh episode of the season), you probably should have figured out who the Mystery Person is by now (lord knows there've been plenty of tantalizing hints), so it's not exactly a Big Secret, but the episode builds to a final shot that implies insists it is a Big Honking Deal. A woman has snuck into the house and, as she puts her ear up to the bedroom door, the camera slides through the wall, showing the characters on either side. And the first thing you think is: Yeah, why have they been straining so hard to hide that? What's worse, the scene in which the woman discovers who is in the room is saved for a future episode and yet another false climax.

We're all familiar with this kind of thing from horror and suspense thrillers in which someone unaccountably "sneaks up" on somebody else and scares them. Somehow, they can make no sound (actually, it's easy -- don't record any!), even when they have no reason to try, and can appear right next to the person just in time to startle them, and us. On certain occasions this can be excused or explained because the movie is, perhaps, expressing the character's anxiety or paranoia, or simply allowing us to share the character's subjective experience. Hey, if she didn't notice the guy creeping up behind her, then it's OK that we don't, either. Where it doesn't work -- as I just mentioned -- is when the movie cheats. 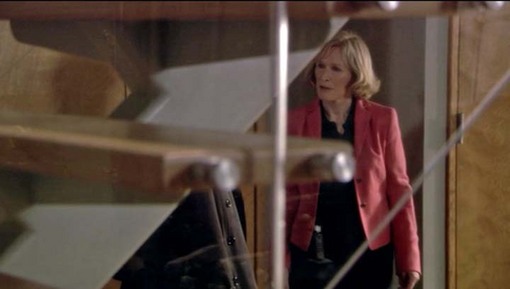 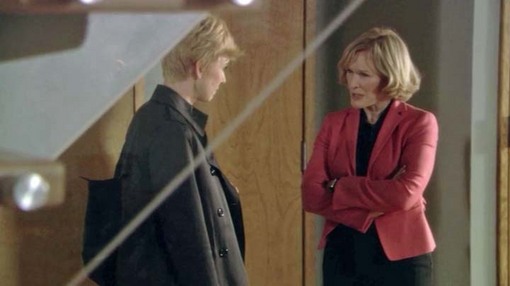 Movies (and TV shows like "Damages" and "Breaking Bad" come to mind) often do this kind of thing indiscriminately. Is there any good reason that, when the the aforementioned sneaky woman comes to call on Patti Hewes (Glenn Close), we're kept in the dark about her identity for a few extra seconds during which a moving camera uses an open staircase to strategically block our view of her? No. There isn't. It's not suspenseful, because there's no set-up and no pay-off. It's merely a self-conscious gimmick that reminds you the filmmakers aren't above cheap shots.

Another kind of shenanigans involves camera placement and editing to suggest false connections between two or more sets of actions. It's one thing when done artfully: That Michael Corleone has ordered a number of killings, which are intercut with his son's baptism, involves a certain dramatic irony ("Michael Francis Rizzi, do you renounce satan?" [Sinister organ flourish) "I do renounce him"). But it can also be used to whip up some false melodrama that makes you feel cheated afterwards. Remember the famous example of parallel editing, intercutting the SWAT raid and the reversal of fortune involving Jame Gumb's dog, in Jonathan Demme's "The Silence of the Lambs"?

The caption-writer in the above clip offers several justifications for the trick (something similar happens in the book; it shows Clarice was right while her boss was wrong, etc.); I think it could have worked if it had been a little less insistent. The close ups of the doorbell(s) take it over the top for me. This and what follows (the pursuit through the scary dark basement) are the weakest parts of an otherwise terrific movie.

The lesson here is, I believe, simple: Play fair. There's nothing wrong with showing off; just be sure you know why you're doing it. And that your audience does, too.