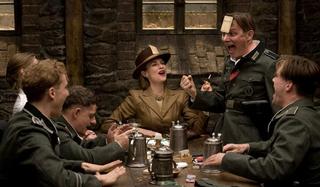 Roger Ebert writes of seeing "Inglourious Basterds" for the first time at Cannes: "I knew Tarantino had made a considerable film, but I wanted it to settle, and to see it again. I'm glad I did. Like a lot of real movies, you relish it more the next time." Keith Uhlich says he's "loving [it] more and more as I reflect on it." Glenn Kenny has already seen it twice and has offered "a structural breakdown" of the film's five chapters.

And Karina Longworth -- well, she has a whole new take on "Inglorious Basterds" since she saw it in that French place last spring:

When I first saw "Inglourious Basterds" at Cannes, I walked out of the theater and felt like something was ... off. I rushed to my computer and wrote a dismissive review. "Quentin Tarantino," I wrote, "has never seemed to strain so hard to just make A Quentin Tarantino Film." I complained about the film's pacing, the quality of its dialogue, the excessive exposition. "'Basterds' plays almost like an assembly edit, defiantly presented as-is," I concluded.

And then I saw the film again, this week, in New York, in a version said to be different from the one I saw at Cannes. Some scenes are said to be shorter, although I couldn't tell you specifically which ones; one scene excised before the French premiere has been reinstated. After that screening, I went back and read what I wrote about the film from France, and cringed. The review of "Inglourious Basterds" I wrote in May simply does not apply to the film I saw with the same title this week.

This happens sometimes. We don't talk about it much, but it happens. Sometimes movies change -- and Tarantino and The Weinstein Company have made no secret of the fact that 'Basterds' has changed since its Cannes screenings....

But I honestly don't know what has changed more since May: the cut of "Inglourious Basterds," or me.

Maybe this is unfair to you, the reader -- maybe film critics shouldn't change. Maybe we should go out of our way to lead extraordinarily stabile lives, to avoid financial stress and familial trauma, to not get depressed or even date for fear of swinging too far towards any emotional extreme in the hopes of maintaining absolute objectivity. If that's the case, I didn't do what I should've done -- I've been sent through the wringer by all the above over the last three months, and come out a different person. But the world changes, whether or not I stay the same, and at the rate this one is changing, it's unrealistic to expect something as trifling as a movie opinion to stay fixed indefinitely....

Very nicely put. Times change, too. As I like to say, movies are neither made nor seen in a vacuum. Or as Arnaud Desplechin said: "You can't stop a film from meaning things." Even if it doesn't mean what the maker, or anybody else, wants it to mean. Art, like everything else, evolves, along with the people who imbue it with meaning. (That last sentence is really about the idea of god, but don't tell anyone.)

Tarantino has never expressed a desire to make political films, but, given the pocket-synopsis of this one (victims torture and kill the torturers and killers), he can't blame anyone for seeing parallels to post-9/11 American history. Ten or 20 years from now, when the movie is removed from its current context, those echoes may seem insignificant. Is it really about Abu Ghraib? Is it even about World War II? Or is it more importantly another movie-movie wish-fulfillment fantasy of the Tarantino kind?