In some Scanners comments this weekend, we've been discussing various comparisons between George W. Bush and Richard M. Nixon, seeing as how Oliver Stone has now made made both failed presidents the subjects of Major Motion Pictures. Matt Zoller Seitz and Kevin B. Lee, in a series of visual and print essays at Moving Image Source about Oliver Stone's political portraits ("Born on the Fourth of July," "JFK," "Nixon," "Alexander" -- leading up to "W.") have been re-examining these films as part of Stone's cinematic autobiography-in-process. (I think all these films, for better or worse, say more about their maker than they do about their subjects -- though there's nothing exceptional about that.) 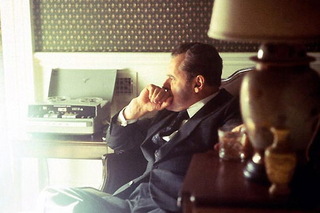 Nixon is a key figure in my life -- the center of many of my political disputes with my late father, who would not find it unflattering to be described a "redneck" from Catawissa, MO, which I think is a pretty accurate description. When I was 10 and studied the 1968 presidential candidates in elementary school, I decided I was for Hubert Humphrey. My dad voted Nixon (though sometimes I suspected him of actually going for Wallace -- a racist gargoyle who could not have terrified this young Seattle white boy more if he had actually worn a gown and pointed hood). To me, Nixon's resignation in disgrace represented the triumph of my morality over my father's. To him, the only difference between Nixon and any other politician was that "he got caught."

Now that I'm older than he was then, I think we both have our points. At any rate, the president the country chooses unquestionably reflects and defines that period in its history.

Which leads me to something Matt writes about "Nixon" (the movie):

A sprawling amalgam of "Death of a Salesman," "Citizen Kane," Freudian psychoanalysis, and 50 years' worth of headlines and transcripts, "Nixon" feels less like a biography than an autobiography, colored by Nixon's paranoia and self-loathing. [...]

It was assumed that Stone, a counterculture provocateur whose Vietnam service coincided with Nixon's rise to the presidency, would skewer the man as a panderer to red-state reactionaries, a man who pursued power for power's sake, and an enabler and exemplar of the military-industrial complex whose presence hovers over so much of Stone's filmography. Yet the movie is no hit job, as evidenced by the sequence that follows Nixon's strangely psychoanalytical China trip with a harshly editorializing account of the Christmas bombing of Hanoi that no early '70s broadcast news outlet would ever have allowed. This newscast, like all the newscasts in the movie--indeed, like the whole of "Nixon"--isn't supposed to be taken as a straight recreation of reality. This isn't the news. It's the naysaying chorus Nixon hears in his head.

In Robert Altman's film "Secret Honor," Philip Baker Hall plays Nixon in the throes of an all-night exorcism/confession -- alone, talking to himself and to God and Kissinger and the American People. It's a one-man show (from the play/monologue by Donald Freed and Arnold M. Stone), so Hall/Nixon plays all the parts -- including that chorus in Nixon's head. I still believe "Secret Honor" is by far the better film (the "American Experience" documentary on "Nixon," which you can see here, is also a great film; the 1994 Watergate doc even more important and compelling), but the above makes me want to try, at least, to watch "Nixon" a second time. (Nixon's notoriously smeary campaign tactics were disturbingly similar to McCain's.)

American presidents make for fascinating, puzzling, infuriating characters. We like to see them in Shakespearean dimensions: like Hamlet, Henry IV, Richard II... or maybe Bottom. But comparisons are often enlightening. The W. this country barely re-elected (if that's the proper term) in 2004 bears some terrible similarities to the Nixon re-elected (in a landslide) in 1972. Both were on the verge of being "found out," and both would suffer unprecedented public scorn and disapproval.

Both, too, have displayed an astonishing capacity for denial (or, at least, in the Nixonian phrase, "plausible deniability") -- whether as a symptom of their insularity, psychological vulnerability, or genuine conviction that they have behaved properly, or defensibly, or honorably. It's crucial to the understanding of Nixon that, as VP, he never got over being treated as something of a non-entity by his president, Dwight D. Eisenhower, the man who eventually coined the term "military-industrial complex." (BTW, Nixon didn't look nearly as bad in the 1960 debate with JFK as myth would have it.)

Not quite four years after Nixon resigned, the world was shocked when he (in-)famously told David Frost: "When the president does it, that means that it is not illegal." (You'll be seeing that again in Ron Howard's "Frost/Nixon," opening in December.) I believe Nixon managed to convince himself that was true -- though maybe not until after the fact. I do not believe Bush required any convincing, from himself or anyone else, to believe the same thing, because (despite Junior's daddy issues) I don't think he's capable of serious doubt -- of hearing, much less acknowledging, any disapproving voices. Perhaps that makes him more of a comic, lightweight, clueless character than Nixon, who is usually portrayed as tragicomical (I'll be interested to see how Stone plays W.), but the consequences have been no less catastrophic for the country, and the Constitution.

Once crucial difference: If Nixon had made the decision to invade Saddam Hussein's Iraq, he would never have publicly joked about not finding WMDs, as W. did. Nixon was fundamentally a serious man (and often criticized for his self-seriousness). His decisions may also have sent thousands of American troops to their deaths for dubious reasons, but he would never have presented himself, as president, laughing about it in front of "my fellow Americans."

To feel the full tragedy and absurdity of Richard Nixon's life and career, I recommend visiting the Richard Nixon Library and Birthplace in Yorba Linda, CA, a monument to denial and desperation -- and, of course, the only presidential "library" built entirely with privately donated (non-taxpayer) funds. It is one of the most astonishing places I've ever been, like Disneyland and the Taj Mahal rolled into one. There's a ceramic pumpkin with an Alger Hiss micofilm in it -- and the dark Hall of Watergate. More about that some other time. Meanwhile, I can only imagine what W. World will be like...

From the 3-hour American Experience doc:

John Ehrlichman: "The first thing he said to me was: 'When I went to sleep last night, I prayed that I would not wake up this morning.'" (W.? Not a chance.)

Elliot Richardson: "A secure Nixon, almost surely, in my view, would never have been president of the United States at all."