"W." is the third in what could turn out to be Oliver Stone's five-part trilogy of movies containing pronounceable capital letters in the titles (after "JFK" and "U-Turn"), if you don't count "Natural Born Killers" and "World Trade Center," sometimes known as "NBK" and "WTC," respectively, in which case it may already be the fifth film in a proposed diptych about the tetralogy of power. 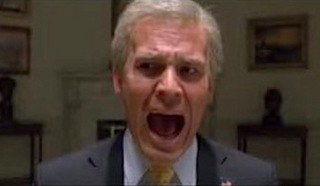 I haven't seen the movie yet, but the timing seems inopportune. Few public figures have faded into irrelevance more quickly in recent months than George W. Bush, whose popularity and name-recognition numbers are now running slightly behind Sanjaya, and I'm not sure I remember who that was.

Not long ago (or was it years?), George W. Bush appeared at an office products warehouse.

But back to "W." (notice the period in the title -- like "Adaptation."), which is from all reports a "non-political" portrait of the sitting lame duck:

Can the overwhelming unpopularity of a president translate into popularity at the box-office? What an odd question.

Stone and screenwriter Stanley Weiser ("Wall Street") say they based "W." on the public record and their own independent research. Some conspiracy theorists claim "inside knowledge" that it was based on a whole bunch of books.

But one I haven't heard mentioned is Jacob Weisberg's 2008 "The Bush Tragedy," an Oedipal analysis of the junior Bush's presidency (by way of Shakespeare's "Henry IV" and "Henry V"), which itself draws upon previous scholarship. Weisberg, like Stone's movie, posits that W.'s personal weaknesses have a great deal to do with his daddy issues (and grandaddy issues).

Weisberg traces the intertwined Bush and Walker dynasties, and shows how their clashing moral and political values are expressed in W.'s personality. These conflicts manifest themselves in his drinking, his religion, his language, his reputation as an underachiever -- and, most devastatingly, his failings as an executive and a "Decider" (for instance, his susceptibly to manipulation by figures like Dick Cheney and Karl Rove, who easily understand how play off his familial insecurities).

Without question the most fascinating psychological serial-drama playing out before us right now is between Mad Mac and Mr. Cool. But, even so, wee W. rears his head every once in a while -- as in McCain's "I am not President Bush" zinger from the third 2008 presidential debate. (Obama's l'esprit de l'escalier retort here. Then again, maybe Obama's cool-headed refusal to take the bait was a deliberate performance choice...)

Weisberg said his goal was to "provide an early historical perspective on George W. Bush. Instead of arguing, as so many have, that he is a bad president, I largely assume that he has failed as president, and ask the more interesting question of why."

Will there be more interest in Stone's take on recent history than there was in, say, his version of ancient history (aka "Alexander")? Whether you're planning on seeing "W." this weekend or not, here's a little past-is-prologue nugget to keep in mind from Weisberg, who sees Bush, for all his damage, as a figure worthy of some sympathy and even pity:

As I've tried to understand more deeply who he is, what he thinks, and why he does what he does, the question of blame has become less interesting to me. Driven by family demons, overflowing with confidence, and lacking any capacity for self-knowledge, Bush seems to me to have done precisely what we should have expected of him....

I was going to call this book "The Bush Detour," thinking of the Bush presidency as simply lost time for the country. But as I studied George W. Bush I came to think of the story as a tragedy because of the way the president's inability to master his feelings toward his parents drove decisions with terrible consequences not just for him, but also for America and the world. To state it simply, the Bush Tragedy is that the son's ungovernable relationship with his father ended up governing all of us.

When more is known about the second Bush presidency, when more records (if they still exist) are declassified and more participants come forth with their own previously undisclosed documents and accounts, what will history remember? The indelible "narrative" of this president may have already been written, whether he knows it or not. But, as Josh Brolin's W. reminds us in some spots for Stone's film: "In history we'll all be dead."

P.S. I must observe that there's more life and awareness in Josh Brolin's face in the screen grab above than I've ever seen in W.'s. Does that signify a complex, humanizing performance, or a false one? Or all of the above?