To spoil or not to spoil? (Don't worry.) 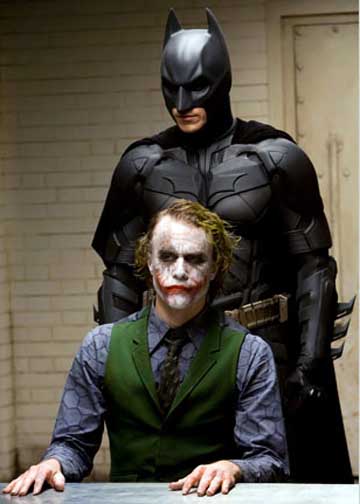 The guy in the black suit is really the millionaire playboy Bruce Wayne who became a caped crusader after his parents were killed. And he's played by Christian Bale, just like in the previous movie, "Batman Begins." Ooops. Is that giving too much away?

Note: There are no "The Dark Knight" spoilers in this post. None whatsoever.

There, I said it. Really, what's so difficult about adding a spoiler warning to a review? Ken Tucker, "critic at large" for Entertainment Weekly, is just indignant about the whole idea:

Whether I'm writing a review or reading one, I don't want any held-back information to prevent that review from being the most interesting, thought-provoking one possible.

If that means a movie critic reveals a crucial plot point in order to lay out an argument for a film's greatness or its hideousness, so be it.

OK, remember we're talking about a deadline-driven review here -- something relatively brief (usually more than seven words and considerably less than 1,000 words in EW) shortly before or after a movie or TV show first becomes publicly available in one or more US cities. Not a longer critical essay targeted at a reader who has already seen the work in question. (See David Bordwell's recent piece about the differences here.)

I feel there are two kinds of ideal readers for release-date-dependent reviews:

1) those who will read a review (or maybe just a few paragraphs), decide to experience the work for themselves, and then return to the review afterwards for further consideration; and 2) those who've already seen it and are interested in someone else's take on it. A review ought to give you some idea if you might be interested in what's being reviewed -- whether the critic likes it or not. After all, you were interested enough to read the review, right?

Tucker observes that TV episodes (and movies) are sometimes accompanied by a studio or network request "that the final plot development not be revealed." (That's right, sometimes they actually have to ask.) Tucker says:

... I'll abide by that if keeping mum doesn't prevent me from doing my job, which is providing the most engaging argument I can to you readers. Still, the very fact that a plot twist becomes the most sacred bit of information, the key to enjoyment, doesn't speak well for audiences' appreciation of the performances, the direction, and other elements that make a show worth pondering.

Advertisement
Tucker appears to harbor a warped, and perhaps inflated, view of his job. Let's look at it this way: Imagine that you're out with friends and you're making an "engaging argument" about a movie... that only one of you has seen. That would be you. How engaging is your argument going to be? When you recount a sequence of images so as to reveal a major story development, will that significantly improve the quality of your discussion? How greatly will your friends appreciate your appreciation of the performances, the direction, and other elements -- when you describe the movie they haven't yet seen and deprive them of discovering the film for themselves, assuming the trailer and TV spots and posters and print ads haven't already done that for them?

There doesn't have to be a huge plot twist involved. And if there is, probably the very worst thing you can do is to reveal that there is a Big Twist in the first place. That's already giving away too much. I remember going to an early screening of "The Crying Game" knowing nothing more than it was a Neil Jordan movie (that's enough for me), and right there on the press kit that they gave me at the door was a plea not to reveal the big twist. That was when Jordan himself was sure nobody would see his movie, anyway. The Weinstein Miramax made the "surprise" part of the astonishingly successful marketing campaign. But that set up people to look for something, to expect something. Any surprises should ideally have come as a surprise. Still, I can understand describing a movie as being full of twists, or containing something that causes you to re-evaluate everything you've seen up to that point. That's significant, as long as you're not too specific about it. Fortunately, I was still sufficiently surprised about a third of the way into "The Crying Game" when... well, something unexpected happened involving Forest Whitaker's character.

When I write reviews, I try to avoid plot as much as I possibly can. A simple statement of the premise, and descriptions of the characters (personalities, physical attributes, etc.) will do. You can always tell a reviewer is on auto-pilot, just trying to fill space, when more than a paragraph is given over to a flat recital of story points that probably came from the studio's synopsis. If the story can be that easily separated from the way it's shot, directed and performed, it's probably not much of a movie -- or the writer isn't much of a critic.

Nevertheless, I'm sometimes accused of giving away too much ("Iron Man," "There Will Be Blood") -- mostly by people who have already discovered so much about the movie from advertising or web-scouring (or Ken Tucker reviews) that they think I'm referring to a spoiler they already think they know about; or people who have seen the movie and, in retrospect, understand a reference that people who haven't seen it yet would not.

The challenge is to write in such a way that somebody who's experienced the work (movie, TV show, play, piece of music...) will see what you're saying about it, but that someone who hasn't will get the gist, but still be able to discover it for themselves when they witness the thing themselves. Virgins may at first fear that you've given away a plot twist -- until they see the movie and realize that you've described something that happens in the first five minutes and is only the set-up for the film's various narrative, thematic and/or aesthetic developments.

Nevertheless, I did get one e-mail -- one -- recently from somebody who was outraged that I had said, in my "Iron Man" review that the main character is an arms dealer who articulates the Bush Doctrine (there's an explicit -- and very funny -- reference to "Halliburton") and then has second thoughts. If he sees the movie (and I might have had more respect for his argument if he had), he will recognize within the first three minutes that the character is being set up for a fall. It's like when you first meet Mr. Scrooge in "A Christmas Carol." Or, say, Cary Grant's character in "Bringing Up Baby." You recognize the archetype immediately, and a great deal of the pleasure comes from watching him go through the inevitable changes.

It is not tough to describe, in great detail, even the endings of movies without revealing everything about them. You can discuss the meaning of Chinatown in "Chinatown," or of Rosebud in "Citizen Kane," or the process and thematic resonance of the final shot in Antonioni's "The Passenger" without revealing the fate of the characters or offering plot-level resolutions to any mysteries that may have tantalized viewers as they're watching the picture. If you can't do that, you have no business writing reviews. But if you just can't find a way around it, what does it hurt to add a two-word "spoiler warning" as a courtesy to your readers who might not want to have the entire experience predigested for them?

Take "Citizen Kane." Everybody knows that "Rosebud" is the nickname of Jed Leland's typewriter at the The Inquirer. (No, it isn't.) But you can discuss Thompson's final speech ("Maybe it's something he lost..."), and the last few shots, across the Xanadu warehouse, and the incinerator, and the smoke, and the windows and fences and the series of shots that reverse the film's opening sequence... and you'd be engaging with the film on a specific and profound level without depriving anyone of discovering what happens -- or, more important, of experiencing the feeling of what happens. They'll get the idea, but can still discover it themselves; they'll apprehend your reading of it, but still have room to develop their own.

"As a TV critic," Tucker says,

I am going to tell you who got killed on, say, last night's "24," because an event like that immediately becomes part of the pop culture conversation — you bouncing your opinion off mine, critic and reader relishing the opportunity to speculate together on what this means for a show we care about.

Note that he says "last night's" episode, not "next week's" or "next month's." Nothing wrong with addressing something important that's already out there in the world (like, say, the ending of "The Sopranos" on the day after) -- as long as you're up-front with your readers about the subject you're going to address.

Of course, one never knows when one's issue of Entertainment Weekly will arrive in one's mailbox, but given that it is a weekly, are we to assume that the "pop culture conversation" will be over and forgotten next week. If so, how vital was the conversation to begin with. (Perhaps Tucker is talking about the magazine's web site. Does he respond to reader comments there? I don't see much in the way of back-and-forth "discussion" in the pages of the magazine itself.)

Knowing the way something turns out shouldn't ruin anyone's pleasure. Hey, it's a 24/7 media world. The best way to kill spoiler culture, if you don't like it, is to say one thing to both spoilers and spoiler ''victims'': Grow up.

Reviewer, heed thyself. Decreeing what "should or should not" ruin anyone's pleasure isn't a blanket decision that you can hand down from your lofty perch. Any reviewer has to make judgment calls, but that's what they get paid to do (especially if they're employees of Time-Warner).
Advertisement