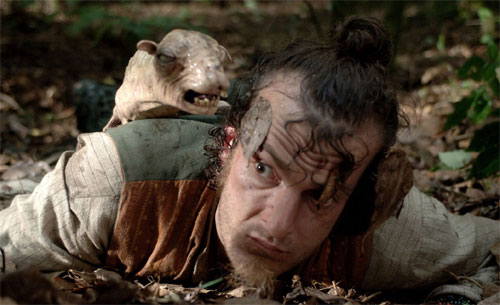 The DNA of "Black Sheep," the New Zealand silly, tepid horror-comedy (accent on the second; it's not the least bit scary), traces back to "The Howling," "The Birds," "Night of the Living Dead" (and "Dawn of the Dead") and "An American Werewolf in London" -- with a spot of Lou Jacobi in "Everything You Ever Wanted to Know About Sex...." I don't know that anybody in America would want to re-make a movie about genetically altered killer sheep (suggested titles: "Mutton Mutants" or "Baaaad Blood"), but I kept imagining what Joe Dante could have done with this premise. Rather, what Joe Dante ("Piranha," "Gremlins," "Homecoming," the aforementioned "The Howling") already has done with it.

An evil factory-farm sheep rancher named Angus (see, if it was an American movie it would have to be about beef) irresponsibly experiments with genetic engineering on the sheep farm he inherited from his father -- mostly so that he can name a new breed of Frankensheep after his family bloodline: The Oldfield. His lamb-o-phobic brother returns to the farm to sell off his half of the business and quickly get as far away from those docile white fluff-pots as he can. Meanwhile, Angus's horrid -- and, as it turns out, rabidly carnivorous -- mutant sheep are spread into the general population by a pair of idiotic eco-activists who have no clue about what genetic engineering is. (One: "This isn't going to be like the salmon farm is it?" Other: "Those fish died free!")

Of course, most plants (ornamental and edible) and animals farmed today are the products of some sort of hybridization, in the lab or in the field; the important thing is to keep the hybrids in domesticated environments and not let them get into the wild, where they might wipe out the original species.

Not that anything in this movie should be taken the slightest bit seriously. It doesn't take itself that way. Fart jokes predominate. "Black Sheep" stays within B-movie genre conventions like a sheep in a corral -- no twists or surprises -- but in that sense it feels quaintly sweet and old-fashioned. The guy next to me at the press screening ate some sushi and then fell asleep, snoring even during the loud parts. A number of people left -- probably to get to other screenings -- but in this case they didn't miss anything because you knew within the first 15 minutes exactly where it would go. Other people laughed all the way through. I got hungry.