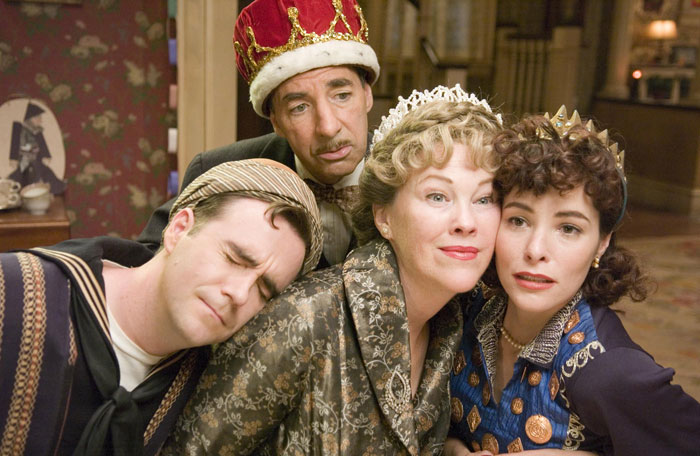 The cast of the Oscar-favorite film, "Home for Purim."

"For Your Consideration" -- Christopher Guest is blessed with the finest comedic stock company since the heyday of Preston Sturges. Guest, Catherine O'Hara (Goddess of Funny), Eugene Levy, Michael McKean, Harry Shearer, Parker Posey, Jennifer Coolidge, Jane Lynch, John Michael Higgins, Bob Balaban, Ed Begley Jr., Michael Hitchcock, Paul Dooley, Jim Piddock, Larry Miller.... I get a thrill just seeing them share screen space in various combinations (and this time they've added Ricky Gervais and Sandra Oh to the mix). Every few years when they get together (the last time they were together was "A Mighty Wind" in 2003), it's like seeing old friends for whom you will always harbor a deep and abiding affection. Here's hoping they keep reuniting for many movies to come.

In "FYC," the subject isn't so much the movie industry (Guest already made the best American dissection of the contemporary film business back in 1989 with "The Big Picture") as the awards and publicity industry. We join a film in production -- a kind of kosher Tennessee Williams melodrama about a Jewish family in the South during the war, called "Home for Purim." Somebody on the web (or the "World Wide Internet" as the typically clueless HollyLuddites call it) claims the lead actress (played by O'Hara), an '80s sitcom star who's been virtually forgotten by the public and the industry, may be giving an "Oscar-worthy" performance, and a rumor is born that (as in "The Big Picture") takes on a life of its own.

Agents, publicists, EPK (Electronic Press Kit) interviewers, TV entertainment reporters -- everybody jumps on the bandwagon and rides it through "awards season." The simple truth behind the story is that movies are no longer made and then marketed; the marketing starts long before the picture is made, and continues unabated throughout the process, from script to soundstage to theater to DVD.

Guest's movies are always about people's unfulfilled fantasies and expectations -- including the way people strive desperately (and pathetically) to live up to their own idealized vision of themselves. There's nothing funnier, because there's so much pain mixed with the humor. As Homer Simpson has said, observing a man getting hit in the crotch: "It's funny because it's true." (Followed by: "It's funny because I don't know him" -- although you definitely know the characters in a Guest movie.)

On the Guest Scale (with "Waiting For Guffman" probably the funniest), I'd rank "For Your Consideration" a little ahead of "A Mighty Wind" strictly for laughs, although the previous movie was conceived as a gentler character comedy to begin with. And now I'd like to point out that, except for the title of the movie in production and the Internet gag, I gave away virtually no jokes at all.

"Red Road" -- The windows in James Stewart's apartment building in "Rear Window" were little screens through which he glimpsed other people's lives. The danger for any voyeur comes when he or she passes through those little screens and intervenes in the lives behind them -- as when he sends Grace Kelly across the way to look in on peculiar developments in the apartment of Raymond Burr.

In "Red Road," a fine and disturbing thriller set in Glasgow, a woman who works as a security monitor for City Eye Control faces a bank of video screens, each of them representing a feed from a security camera. While looking for crimes in progress or people in distress, Jackie (Kate Dickie) also amuses herself observing privileged moments -- a man walking his dog, a woman dancing on the job. But there's something sad and alienating about her occupation; it mirrors her isolation from everyone on the other side of the screen.

At work, the cameras are steady and under Jackie's control. She can zoom in or out, pan and tilt as she likes. But once she's out in "reality," the film's writer-director, Andrea Arnold, uses a camera that is unsteady and uncertain. And then Jackie spies someone she fears she recognizes, and begins to insert herself into his life for reasons that don't become clear for some time. Slowly, like a zoom out from the pixels on a TV screen, the picture takes shape and comes into sharper focus -- "Blow Up" in reverse.

This is the first film in a three-picture Lars Von Trier-instigated project that will use the same nine actors playing the same characters in films by different directors. I suggest you get in on the ground floor.