Attack of the Giant Amphibian!

A horror thriller, a political satire, a dysfunctional family comedy, and a touching melodrama, Bong Joon-ho's "The Host" is also one helluva monster movie. It's the recombinant offspring of all those science-fiction pictures of the 1950s and '60s in which exposure to atomic radiation (often referred to as both "atomic" and "radiation") or hazardous chemicals (sometimes also radioactive) results in something very large and inhospitable: "Them!" (giant ants), "Tarantula" (giant spider), "Matango: Attack of the Mushroom People" (giant fungi), "The Amazing Colossal Man" (giant bald guy), "The Giant Behemoth" (giant behemoth -- both giant and a behemoth, but more precisely a radioactive ocean-dwelling Godzilla clone), "Frankenstein Conquers the World" (giant Frankenstein's monster atomically regenerated from the beating heart of the original monster after the A-bomb is dropped on Hiroshima), and so on.

In "The Host" (a k a "Gwoemul"), the mutagen is a simple aldehyde, HCHO (possibly even a radioactive variety). The movie opens in the year 2000 at the Yongsan U.S. Army base in Seoul, where an American mortician (the always superb Scott Wilson, clearly having fun) orders a Korean subordinate to dump dusty bottles of "dirty formaldehyde" into the sink ... which empties into the Han River. When the underling objects, the American insists, "The Han River is very... broad, Mr. Kim. Let's try to be broad-minded about this." Had Al Gore been present, he would have made a persuasive counter-argument with colorful charts and graphs about the dangers of poisoning our fragile planet, but an order is an order, so down the drain the noxious stuff goes.

(This scene is based on a notorious incident involving Albert McFarland, an American civilian mortician at the Yongsan military base, who in 2000 ordered his staff to pour 120 liters of formaldehyde into the morgue's plumbing. Although the chemicals passed through two treatment plants before reaching the Han, source of Seoul's drinking water, the scandal sparked an anti-American uproar in South Korea.)

At the movie's center is the Park family, a clan no less eccentric than the Hoovers of "Little Miss Sunshine." Patriarch Park Hee-Bong (Byun Hee-Bong) runs a snack stand down by the river with his dim-bulb son Kang-Du (Song Kang-Ho). His other son is a chronically unemployed no-goodnik, Nam-Il (Park Hae-Il), from whom he is estranged. But if the boys in the brood are underachievers, the girls are something else: Their sister Nam-Joo (Bae Doo-Na) is an acclaimed archery champion, and Kang-Du's daughter Hyun-Seo (Ko A-Sung), an adorable plaid-skirted schoolgirl, is the apple of everyone's eye.

When the monster nabs a Park from the shore (in one of the best fleeing-in-panic crowd scenes ever filmed), the clan reunites to seek revenge. If only they can fight their way through the political red tape. The government's response to the monstrous threat is an American-backed disinformation campaign about an outbreak of "Asian flu" virus that, as is so often the case with official lies, only serves to exacerbate the real Terror.

The creature -- just like (spoiler warning) the Moroccan kids who accidentally shoot the American employer of the Mexican nanny with the rifle formerly belonging to the Japanese businessman with the deaf daughter who is sexually provocative in "Babel" (end of spoiler warning) -- unknowingly precipitates an international incident. And in the ensuing pandemonium, the Parks are forced to fend for themselves.

But about the monster. Created by the San Francisco-based FX house, The Orphanage, it is a creature of scary amphibious loveliness, with greenish salamanderlike skin, froggy legs and webbed feet, and a pinkish vagina dentata maw that resembles the primary orifice of an Arrakis sandworm, but with extra mandibles and barbed lip-flaps around the opening. (Nice serpentine tongue, too.) This is the most hideously beautiful movie-monster since H.R. Giger's Alien, equally ferocious and hard to kill, but with a poignant side. It is first seen (almost not-seen) hanging from the underside of a bridge like a fruit bat. A giant fruit bat. And, it turns out, it can not only swim and crawl and hop, it can swing and flip like an acrobat, using its tail as a trapeze.

The movie itself is no less dexterous (though it sags in the middle), twisting suddenly from horror to pathos to comedy to action and back again, as the Parks (individually and collectively) battle the forces that would tear them apart -- forces that not only include a giant mutant river monster, but hazmat teams, the police, mad scientists, government conspirators, and an American chemical weapon called "Agent Yellow."

Like its magnificent beast, "The Host" is wild, crazy, messy, preposterous -- and all the better for it. 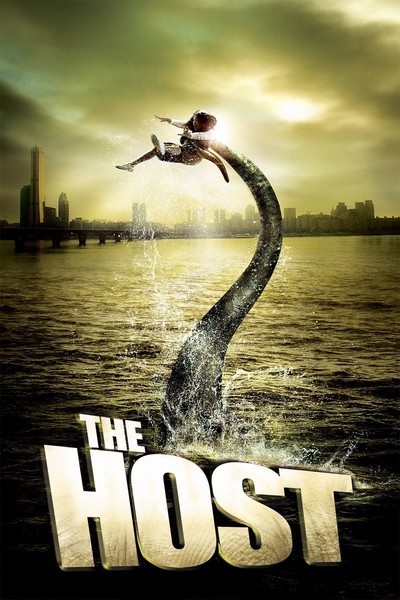