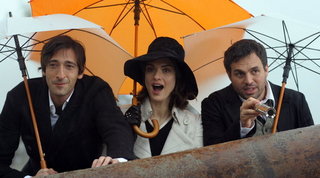 How to plan my Toronto schedule when there are a few dozen movies screening every day and I want to keep from knowing much of anything about them before I see them, so that I can (as much as humanly possible) avoid preconceptions, false expectations, artificial festival "buzz," and other distractions that have little or nothing to do with what's on those screens? (See last year's accounting: "What did I know and when did I know it?")

The first thing I look for are the names of directors whose work I'm interested in following (or whose work I think I would like to follow). This year, for example, Danny Boyle, Kevin Smith, Rod Lurie and (as previously mentioned) Guy Ritchie all have films in this year's festival -- which, in my case, leaves more room to accommodate movies by directors I like. Not only for megastar filmmakers like the Dardennes and the Coens, but for Terence Davies ("The Long Day Closes"), Rian Johnson ("Brick"), Ramin Bahrani ("Chop Shop"), Kathryn Bigelow ("Blue Steel"), Jerzy Skolimowski ("Deep End"), Kelly Reichardt ("Old Joy"), Michael Winterbottom ("Tristram Shandy: A Cock and Bull Story" -- who makes two or three movies a year, it seems)... Those parenthetical titles, of course, are earlier films by these filmmakers. I don't even remember most of the titles from this year yet, because I haven't seen the movies. I've just been circling times and places on my screening schedule.

I always rely on tips from friends and acquaintances and readers and bloggers who may become friends and acquaintances, especially if I like their suggestions. And, of course, there are those movies I've heard about from Cannes and Venice and elsewhere over the last several months that have made me go: "That sounds like something I want to see!" Now, if only I could remember what they were called. (In some cases, I've recognized the stills associated with the movies and that's helped jog my memory.)

But it is possible to overthink a festival. I believe it was travel guru Rick Steves who offered the wisest of maxims for experiencing just about everything in life, something along the lines of "Don't be afraid to get lost." You have to be willing to take some chances, pursue hunches, take advantage of coincidental encounters and connections when they arise, and just... improvise. Arbitrary and capricious decisions are to be encouraged at film festivals. Not so much in presidential elections.

Sometimes the title alone is almost enough to seal the deal. When I noticed there was a film called "The Biggest Chinese Restaurant in the World," my cinedar rapidly responded. When I learned that it was a documentary, it went onto my must-see list.

On the other hand, when I discovered that a movie called "The Secret Life of Bees" was not, in fact, a documentary about bees, I was devastated and angrily crossed the damned thing out. It may be a fine film indeed, but you have to make choices and I wanted to see a documentary about bees and this isn't one. I have not yet gotten over my anger on this account, though it is nothing personal. Also, there have been too many bee movies that were not sufficiently about bees, in my opinion, no matter what their other virtues, from "Ulee's Bees" to "Akeelah and the Bee." (All of these tease with pleasing marquee "e"s, though. And maybe it wasn't "Ulee's Bees," but it should have bee-n.)

Michael Cera is a genius, but I am skeptical about the title of his new film, "Nick & Norah's Infinite Playlist" (2008). Do the makers of this romantic comedy (who include the director of "Raising Victor Vargas") have any idea of who the great alcoholic detectives Nick and Nora Charles are? Or do the names just sound alliteratively catchy together? I am not so sure they have seen a "Thin Man" comedy -- or, if so, what their move has to do with one. And what about Asta, one of the most charismatic movie dogs ever, who also co-starred with Cary Grant and Irene Dunne in "The Awful Truth"? You don't just mess around with the names Nick and Nora. (Or Laurel and Hardy, or Joel and Ethan or Brad and Angie, for that matter.) At any rate, this isn't a movie I feel pressed to see at this particular festival. And the ads are already out saying it opens October 3, so I can wait.

Sometimes you have to dig even deeper into the credits and the stills to find out if a movie seems like it may strike your fancy. Take "It Might Get Loud," a documentary by Davis Guggenheim. On the one hand, Guggenheim directed some episodes of "Deadwood"; on the other, he won an Oscar for "An Inconvenient Truth" which, though urgently argued, was basically a PowerPoint presentation with Al Gore. Turns out, "It Might Get Loud" is a portrait of three electric guitarists. I am fond of that instrument, the electric guitar, and Les Paul is mentioned in the opening paragraph of the blurb, so that sounds promising.

However, the guy on the right in the published still is The Edge, which immediately turned me off because I can't stomach U2. The guy on the left, however, is Jack White, and I like his crunchy music a lot. In the middle is some dude with a gray mane and he turns out to be Jimmy Page and I can take or leave Led Zeppelin, mainly because I see no need to ever hear any of their relentlessly overexposed music ever again in this lifetime. But then another name caught my eye: Skip Lievsay. The Skip Lievsay, sound designer extraordinaire for the Coens, Scorsese, Spike Lee, etc. He did the sound. I'm pretty sure I'm gonna catch this one, unless there's some un-circumventable conflict.

When all else fails you can look in the big ol' catalog (available for $33.50). Or not. In the past I have warned about reading the sales-pitch descriptions because they can actually give away the whole movie. (What does it say when even a festival programmer feels the need to try to impress you with the fact that he or she has already seen the picture before you have?)

At dinner last night, as some friends and I were poring over the possibilities, we spontaneously created a game we thought was not only fun but really, really amusing. All of us had written blurbs for international film festival catalogs before, from Seattle to New York. We understand, honestly we do, how difficult it can be to write about all these movies, especially when it feels like you've already written a couple thousand of them, and you start losing track of which movie you're writing about and what you've already said about the other ones.

But as we glanced through the Big Book, certain glaring clichés (is that a cliché?) veritably leapt off the pages at us. (There. That's one.) It wasn't long before somebody would read a sentence out loud and we would all skip to the end of the page to see if it was the same offender, phoning in blurb-speak. It was almost like discovering the auteur theory all over again. The name became immediately familiar, and an instant punch-line. (Not unlike another name that was virtually unknown until just a few long days ago...)

Here's what set the game in motion. If you happen to be the lucky purchaser of a TIFF '08 catalog, you can play the game yourself (which is named after the blurbster, but we are going to refrain from mentioning his name here because he -- turns out it's a "he" -- may be underage, unmarried and/or knocked up). Actually, this is good stuff for somebody like me to keep in mind as I begin trying to write coherently about films under deadline pressure between screenings. Last year I made a vow to avoid using superlatives and hyperbole. This year I rededicate myself to sidestepping meaningless comparisons, non sequiturs, and critic-speak of dubious insight (I can try, can't I?) like the following:

"... the most soulful of actors, capable of combining emotional expressiveness with unshakable integrity."

"A mother knows. Great acts of heroism can come from that gut, maternal certainty."

"Life in an occupied territory is never easy, but who knew it could be so beautifully absurd?"

"The stories vary, but what remains consistent is this English director's search for psychological truth.... This is a beautiful, slow burn of a film, made with insight, passion and grace."

I think there were some even better ones (at least they seemed better over a few Maker's last night when they were bringing tears to my eyes), and if I come across them again I'll be sure to let you know.