Your User's Guide to Movie Violence

When Michael Haneke's movie-star remake of his own "Funny Games" opens Friday, he claims it will pose a direct challenge to American audiences. (In my review, which will appear that day, I call his bluff and propose a few counter-challenges in the same spirit. Two -- or more -- can play at this funny game!)

If you've seen the 1997 version, you've pretty much seen the English language one, because it's virtually a shot-for-shot recreation. Here, from the studio press kit, is what Haneke (whose "Code Unknown" and "Caché" I consider to be masterpieces) has to say about what he's trying to do with "Funny Games":

"I’m trying to find ways to show violence as it really is: it is not something that you can swallow. I want to show the reality of violence, the pain, the wounding of another human being.... "Recently a friend and critic who recently watched 'Funny Games' said to me 'now the film is where it belongs.' He is right. When I first envisioned 'Funny Games' in the middle of the 90s, it was my intention to have an American audience watch the movie. It is a reaction to a certain American Cinema, its violence, its naïveté, the way American Cinema toys with human beings. In many American films violence is made consumable....

"However, because it was a foreign language film and because the actors were not familiar to an American audience, it did not reach its audience. In 2005, British producer Chris Coen approached me with the idea to do a remake in English. I agreed under the condition that Naomi Watts star in the movie."

(See the cartoony "Your User's Guide To Home Invasion" promotional clip, above, that milks the camp appeal. Or is it maintaining a satirical distance? Potential ticket-buyers will have to decide for themselves.) 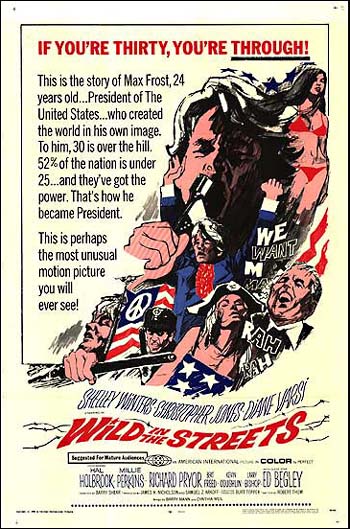 The featured "From the Archives" piece on RogerEbert.com this week is a 1968 essay called "Street violence: On the screen and in the mind," that anticipates Haneke's film by about 40 years. An excerpt:

The most popular movie in the Loop right now is "Wild in the Streets," in which a group of young people take over the government. They are described as "swingers." In fact, they are fascists. After they gain control of the government, they put all citizens over the age of 30 in concentration camps and administer drugs that lobotomize them.

It may be easy for most of us to dismiss these films. In reviewing "Wild in the Street," I called it silly. But the fact remains that it has found enormous popularity among the young people of Chicago. The theater is usually packed. The audience cheers and applauds. Twenty-five years after the Nazi concentration camps, great numbers of Chicago young people, most of them currently students in our public and parochial schools, having studied history and civics, are cheering fascism. I doubt that they even realize it.

"Wild in the Streets" is, in fact, opposed to the fascist takeover it portrays. The audiences don't seem to understand that. There is something terribly disturbing in the way teen-age audiences have misinterpreted this film: They are cheering intolerance, they are applauding the most appalling violations of civil liberty, and they seem to have no inkling that their attitudes are barbaric.

I wonder what the intended and unintended consequences of the Hollywood "Funny Games" will be, if any. Who will be lured to the theater, and how will they interpret what they see? (Or, to quote the original ad campaign for 1974's "Texas Chainsaw Massacre": Who Will Be Left, And What Will Be Left Of Them?)

Will they laugh and cheer (ironically?) like the "Wild in the Streets" crowd Roger Ebert describes in 1968? Or will they feel that they've learned a real lesson about cinematic violence -- like the dilettantish white liberal theatergoers in the National Intellectual Television documentary, "Be Black, Baby!," that's embedded in Brian DePalma's 1970 "Hi, Mom!" These patrons are physically and psychologically abused as part of an experimental participatory theater happening -- but come out professing to have learned something important from their experience, confident that the ordeal has somehow made them better, wiser, superior people. "It really makes you think," one of them says. And that's the joke. Once the show's over, they're the same oblivious, complacent suckers they were when they went in...

P.S. "Funny Games" doesn't work like an American movie at all. It doesn't use the same tools. It doesn't offer a story or characters through which American movies usually create suspense and identification with the people onscreen. But it may be revealing to view it in light of Gaspar Noe's "I Stand Alone" (which includes a warning countdown telling viewers they have 30 seconds to leave the screening) and "Irreversible" (constructed in reverse chronology, with endless Twirly Cam movements and long, steady takes designed to make you ill), or Rémy Belvaux and André Bonzel's pseudo-documentary "Man Bites Dog" (in which the "filmmakers" themselves are implicated in the violence, along with the viewer). The three movies aren't doing the same things, but they are all reflexive examinations of the audience's response to violence onscreen.

The trailer below gives away a LOT -- but in this case that's totally fair play, because the game is about how, or if, the movie addresses your entertainment expectations, and whether those expectations (shaped by the ads and promotion) make you interested in seeing "Funny Games" in the first place. This one also best represents the tone and reflexive strategy of the film, which never lets you forget that you're watching a film: