The color of scent 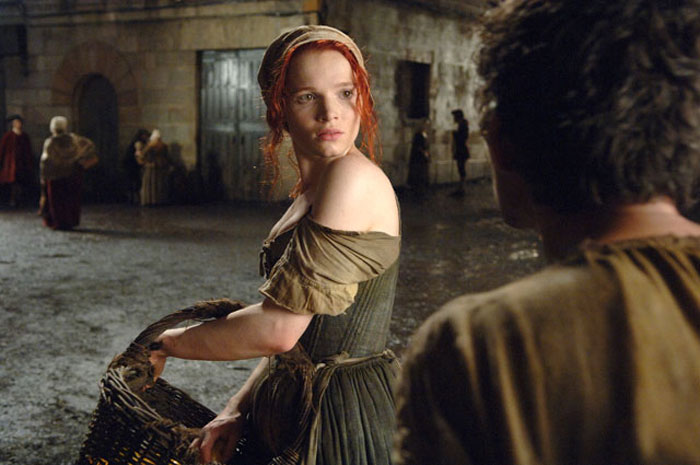 In the few sentences that I've posted about Tom Tykwer's "Perfume: The Story of a Murderer" (just blurbs on my Best of 2006 and Double-Bills lists), I mentioned that the movie was a striking feat of "cine-sthesia," as it were, and that the murders themselves reminded me of Hannibal Lecter's analysis of Jame Gumb in "The Silence of the Lambs": The killing is incidental. What does he seek? (In this sense it reminded me of Michael Powell's "Peeping Tom," too -- voyeurism as a form of possession through the senses -- sight or smell.) And, of course, Grenouille (the scentless apprentice) kills because he covets. Jame Gumb wants to possess a woman's skin; Grenouille wants her scent -- and, by extension, all women's scents.

I wonder if one reason I was so enthralled by Tykwer's film (it's gotten mixed reviews: a 54 on RottenTomatoes) is that I'm told I have mild synesthesia, where senses bleed together a bit so that, for example (from the American Heritage Dictionary definition of the word), "the hearing of a sound produces the visualization of a color." That's very much like what the movie does, with color, shape, texture and sound orchestrated to express odors. But doesn't everybody experience this to some degree? My sensations have mostly to do with color, shape, texture and brightness. Sounds, particularly music (and to a lesser extent tastes, smells, even tactile feelings), are always accompanied by colors and shapes. Doesn't everybody know that trumpets are round and red? That violins are long and yellow? That pianos are (generally speaking) ovoid and green? Snare drums are light grey, short and thin and flat, like em-dashes, while cymbals are silvery, shimmery and round-ish but with no distinct edges, like a spray. Those are some of the things I always see in my head when I listen to music. Also: The number two is green, just as surely as the number five is red and seven is blue. (And the funny thing is, that's true for Roman numerals as well as Arabic ones, though the colors aren't all as strong.) I don't know where these associations come from -- if I've always had them or if I made them when I was a kid.

Do you have these experiences? Care to describe them?

Getting back to my first paragraph, I wanted to refer you to a splendid (and splendidly titled) piece by Stephen Romer in the Times Literary Supplement called "Distilled, bottled, and bewildered" that is a combined discussion of Tykwer's film, Patrick Süskind’s original 1985 novel, and a book of historical research and analysis of the "olfactory arts" by Richard Stamelman called "Perfume: Joy, Obsession, Scandal, Sin." An excerpt that I thought was exceptionally perceptive (beware of spoilers):

"Perfume" is a film on the grand scale – the credits roll on for ever, acknowledging an army of technicians and make-up artists. It should certainly be in the running for an Academy Award for costume design, if for nothing else. The director has pored lovingly over paintings by Bruegel, Chardin and Bosch, among others; there are numerous allusions and vignettes, culminating in a homage to Rembrandt’s “Night Watch”, as a flame-lit band of tartsa nd crooks, gathered in the Paris fish market, devour the protagonist in a supremely ironic expression of their “love”. Grenouille is cannibalized on the patch where he was born, flung by his mother on to a pile of fish entrails.

The description of the fetid stew that was Paris and the evocation of the gutting table are vivid – in particular the splatter of entrails, which foreshadow the dreadful slopping and pasting of fat on to Grenouille’s murdered virgins. His two principal victims, the first and the last, are similar types and similarly beautiful. The poor Parisian plum girl (Katharine Herfurth) prefigures the pale-skinned, chestnut-haired Laura Richis (Rachel Hurd-Wood) who provides the final “note” in Grenouille’s essence, the one that turns his perfume into a substance of baleful power. As the product of wealth and refinement, she is eminently saleable – or in this case, bottleable – as her anxious father, well played by Alan Rickman, recognizes only too well. But the girls’ beauty is incidental; their value is quintessential – a very literal and disturbing abstraction.

Stamelman devotes a section of his compendium to Süskind’s book, and raises the pertinent metaphysical questions, about Faustian-alchemical ambition, the ruthless pursuit of ends with no heed paid to means (Grenouille throws away what he doesn’t need – human lives), the analogy of the drive to create an absolutely pure art with fascist eugenics. But this last comparison with Hitler is difficult to sustain, for surely Grenouille’s malignant hatred is purely non-ideological; rather it stems, like that of Frankenstein’s Monster, from an appalling non-childhood, and from his loveless, autistic state of being-in-the-world. No one ever taught him the language of love or tenderness, so why should he not invent his own, detached from feeling, through the exercise of peerless olfactory power? There is a turning point in Grasse – the first whiff of Laura Richis in the enclosed garden – when the pursuit of perfection becomes murderous, but a long moment precedes it, the autarchic years of solitary perfume-evocation, when Grenouille’s obsession is that of a harmless ascetic. It is, of course, the marriage of acquisitive ambition to obsession that brings tragedy and ruin. And once Grenouille starts on his final bottling spree, once the Monster becomes his own Frankenstein in his “filthy workshop of creation”, then, as the menace and caress of John Hurt’s voiceover nicely imply, there is no stopping him.