The Big Kahuna Gets Lai'd 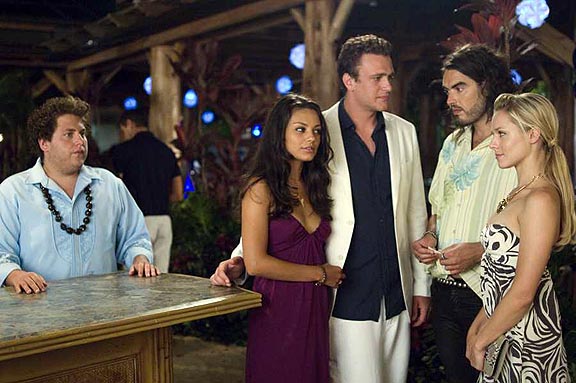 My review of "Forgetting Sarah Marshall" is in the Chicago Sun-Times and on RogerEbert.com. (Also: "My Blueberry Nights" and "Where in the World is Osama Bin Laden?.") Here's an excerpt:

Jason Segel's penis probably would not sell a lot of tickets all by itself. Not that there's anything wrong with it, but most of us don't think of the co-star of "Freaks and Geeks," "Knocked Up" and "How I Met Your Mother" in that way. As wise men (and women) always point out, it's not the thing itself that matters, it's what you do with it. And what Segel does with it as star and writer of "Forgetting Sarah Marshall" is magnificent. Between his brief nude scene at the very beginning (a humiliating, emotionally naked break-up and breakdown), and his even briefer final one (a welcome reunion of sorts), he discovers quite a lot about himself through his genitalia. [...]

... Segel's script [is] a mash-up of "10" (1979), "Modern Romance" and "Better Off Dead...," no doubt enlivened by spontaneous invention on the set. Remember Brian Dennehy as the nurturing bear of a bartender who looks after Dudley Moore in his hours of alcoholic sexual desperation? Here that role is split into two massive resort workers and one laidback beach dude, and they're all funny in their own ways. But there's also a real-world twist: One of the guys with whom Segel feels a vacation-connection turns out to be flying on autopilot, just doing his job the best he can. Not with malicious intent -- it's just his personality, which is probably what got him hired in the first place....