Jason Segel's penis probably would not sell a lot of tickets all by itself. Not that there's anything wrong with it, but most of us don't think of the co-star of "Freaks and Geeks," "Knocked Up" and "How I Met Your Mother" in that way. As wise men (and women) always point out, it's not the thing itself that matters, it's what you do with it. And what Segel does with it as star and writer of "Forgetting Sarah Marshall" is magnificent. Between his brief nude scene at the very beginning (a humiliating, emotionally naked break-up and breakdown), and his even briefer final one (a welcome reunion of sorts), he discovers quite a lot about himself through his genitalia.

Directed by Nicholas Stoller, "Forgetting Sarah Marshall" will, quite properly, be seen as the next issue from writer-producer-director Judd Apatow's anti-stud farm, a sibling of "The 40-Year-Old Virgin," "Knocked Up" and "Superbad." Part of the fun is the way these films mix and match names and faces to produce the randy-but-tender recombinant comedy that has become synonymous with the Apatow brand.

So, for example, Apatow regular Paul Rudd (who appears in this movie as a brain-fried hotel surf coach named Chuck) is friends with Rob Thomas, who is the creator of TV's terrific (now-canceled) "Veronica Mars," which starred Kristen Bell in the title role. Here Bell plays the eponymous Sarah Marshall, star of a ludicrous forensic detective show called "Crime Scene" opposite William Baldwin, whose stock in trade is making tastelessly absurd tough-guy wisecracks about hideously sickening crimes (see any episode of the "CSI" or "Law and Order" franchises).

Sarah's boyfriend (now ex-) Peter Bretter (Segel) provides the "score" for her show, consisting entirely of routine riffs, stings and ominous chords. He'd rather be writing a rock opera. (I hesitated to even give away that much since, in this movie, the offhand use of the term "rock opera" is hilarious all by itself, as well as being the setup for a series of escalating gags. These guys are so subtle and smart, even when they're being vulgar and dumb.)

When Sarah dumps goofy nice-guy Peter for a ridiculous, slithery, pop singer named Aldous Snow (brilliantly inventive Brit TV personality Russell Brand, with a fan-blown black mane), he tries everything to get over her: drinking to excess, reckless rebound sex, television reality shows. None of it makes him feel better. So he escapes to a Hawaiian island resort where, as nightmares would have it, Sarah and Aldous have also come to get away from it all. Hotel hospitality clerk Rachel Jenson (Mila Kunis, the tiny shrew of "That '70s Show" who has become stunningly gorgeous) takes pity on Peter's pain, but where will it lead?

You know exactly where, and the pleasure of "Forgetting Sarah Marshall" is in how it gets there. Which is not to undervalue the good and plentiful jokes in Segel's script, a mash-up of "10," "Modern Romance" and "Better Off Dead...," no doubt enlivened by spontaneous invention on the set. Remember Brian Dennehy as the nurturing bear of a bartender who looks after Dudley Moore in his hours of alcoholic sexual desperation? Here that role is split into two massive resort workers and one laidback beach dude, and they're all funny in their own ways. But there's also a real-world twist: One of the guys with whom Segel feels a vacation-connection turns out to be flying on autopilot, just doing his job the best he can. Not with malicious intent -- it's just his personality, which is probably what got him hired in the first place.

All in all, the movie feels like a vacation on which you keep bumping into amusing acquaintances whom you're actually happy to see, and who know better than to overstay their welcome: Jonah Hill and Bill Hader (both from "Knocked Up" and "Superbad") as a starstruck waiter and well-meaning stepbrother, respectively; Jack McBrayer (the amazing Kenneth, the NBC page, on "30 Rock") as a honeymooner with sexual hangups who's having trouble pleasing his new wife; and let's not forget Carla Gallo as Gag Me Girl in one quick scene. Apatow geeks may recall her as Jay Baruchel's girlfriend (and Segel's ex) in "Undeclared" -- or as Toe Sucking Girl in "The 40-Year-Old Virgin"; or Period Blood Girl in "Superbad." Every one of them is like a splash of rum, or a dash of hot sauce, at the bountiful island buffet. It wouldn't matter if their parts never get much bigger -- they all deserve to be huge stars for what they do in small slices of screen time.

Like most Apatow-influenced movies, "Forgetting Sarah Marshall" is, at heart, about forgiveness. We all do stupid, destructive and self-destructive things for which we're probably not going to forgive ourselves, so the best thing in the world is when somebody else forgives us. In the movie's moral universe, there are no irredeemably bad people -- just those afflicted to various degrees with shallowness, immaturity, selfishness, obliviousness, ambition.

For some critics and audiences -- who've made these kinds of complaints before -- the chief difficulty will be finding a way to forgive lumpish, doughy Peter for not being pretty enough to attract women as knockout beautiful as Sarah or Rachel. Fine, but that's the point at which the movie's geek-fantasy begins. Trying to actually maintain these relationships involves hard work, diligence, introspection, empathy and more than a little disappointment.

And when somebody's as funny as Segel's Peter is here, you can forgive a lot. He doesn't even have to look like he's doing anything. Watch for the moment when he leaves a hotel room and negotiates around the edge of a flower bed to the room next door. It's a variation on a Buster Keaton gag from "The Navigator" (1923) and there's seemingly nothing to it -- just the perfect execution of an arc. Penises are a dime a dozen; Segel's walk-of-indignity is priceless. 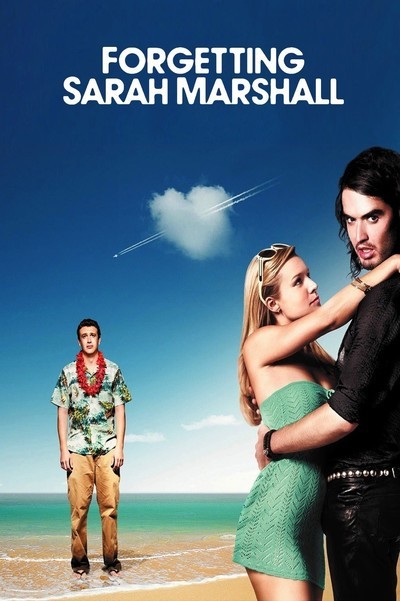 Rated R for sexual content, language and some graphic nudity