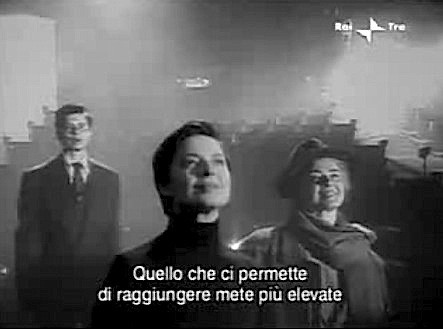 Brad Damaré of Ann Arbor, MI, was kind enough to point me to a marvelous YouTube post of the entire 16-minute 2005 collaboration between Guy Maddin ("The Saddest Music in the World") and Isabella Rossellini: "My Dad Is 100 Years Old" (in English, with Italian subtitles). In this personal tribute to Roberto Rossellini, the subject of recent retrospectives and the father of neorealism (and more), Isabella creates imaginary conversations between herself, her papa, producer David O. Selznick, Federico Fellini, Alfred Hitchcock, Charlie Chaplin and her mother, Ingrid Bergman -- with the actress/daughter playing all the parts. (My delight in her performances is only enhanced by Isabella's recent appearances as Alec Baldwin's volatile ex-wife on "30 Rock.")

Through his daughter, papa Rossellini expounds on his contrarian theories of film -- not as dreams or distractions, manipulations or entertainments, but as works that engage the viewer's conscience. As is often the case on YouTube, the soundtrack slips out of synch partway through, but it's not all that distracting. In some ways it's perfectly appropriate (I wouldn't put it past Maddin to have come up with the effect deliberately), since Italian films were shot without sound (MOS) into the 1960s, with little attention to precisely matching looped dialogue to lip movements.