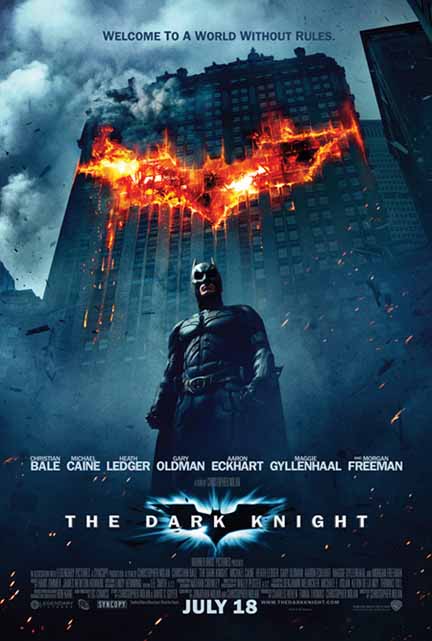 Batman vs. Joker. How much story do you need? Is this movie going to have an unambiguously happy ending? What do you think?

"I'm a storyteller." That's the way many of the great old Hollywood directors used to like to describe what they did for a living. It was a way of being modest, but it also expressed their credo, which was that everything in the movie was meant to serve the story. We're still used to thinking that way about movies, that they're stories told with images and sounds. Sure they are. Sometimes.

I don't mean to say that storytelling is overrated (then again, maybe that's exactly what I mean), but we know it's not necessarily the most important thing in a movie -- even a mainstream studio picture. How it feels will always be more significant than the tale it spins. Because it's a movie.

Some films, of course, are what they call "story-driven." They keep you involved by teasing your curiosity about what will happen next. And it can be quite satisfying when all the narrative strands come together at the end in a nicely shaped bow (often culminating, in classical American cinema, by a wedding or a captured crook or a solved mystery or an underdog victory... or a kiss).

But how many movies really hold your interest just because of the story -- especially in this season of formula superhero melodramas and romantic comedies? Don't you already know, in your very bones by now, what the beats will be and basically where the picture is headed from the start?

You can tell by the genre (and the marketing) that there are a relatively limited number of possibilities, anyway. Look at the posters or the DVD box: "Cloverfield" is not going to end happily (the Statue of Liberty has already lost its head -- how much better are things going to get?) And "Iron Man" isn't going to end with a downer (because that's not the kind of guy he is). "Summer movies" tend to be pretty much like those old "interactive" video games that offered up two or three options at every juncture to create the illusion of choice about which direction the "narrative" could go. But you always knew the possibilities were severely limited if you were going to get all the way through. Maybe a movie will end happily or tragically or ambiguously... but it's not going to end prematurely. The running time is what it is. So what matters is how it gets there and how you feel about the trip and its conclusion. Is it satisfying, surprising, inevitable, predictable, random?

But what constitutes a story when a generic three-act movie can be developed from just about anything, from a book or a play to a game or a doll? David Bordwell recently came upon some 2002 story guidelines from the Filmboard of Berlin Brandenburgh GmbH, which coordinates government funding for some German productions. Among them:

There must be a concrete goal, which at the end of the story is either reached—or not.

There should be a risk involved for the central character in not reaching his/her goal.

The goal is perhaps difficult to reach, and the struggle to do so should bring the central character into conflict.

As DB says, "This is still more evidence that the Hollywood model, with its goal-oriented chain of causes and effects and its protagonist who improves through a “character arc,” holds sway far beyond our own shores. Whether it should be so widespread is another question, but for Kristin and me, this template or formula is a bit like the sonnet or the well-made play: a form that can yield results good, bad, and indifferent. The point is to take the form seriously enough to understand what makes it work."

In the words of Isaac Hayes: "Rat own." I always come back to the principle that Roger Ebert has phrased so succinctly: "A movie is not about what it is about. It is about how it is about it." To me, that's as eloquent a definition of movies, and film criticism, as anybody's ever articulated. And it seems to me that we don't take the storytelling -- not the contortions of the plot, but the shot-by-shot construction of a movie (the telling that is the movie) -- seriously enough most of the time. To put it in literary terms, I wish people would concentrate more on ill-formed (sloppy, repetitive) sentences and paragraphs and less on plot holes or improbabilities. Story is optional; style is what's there, on the page or on the screen, from moment to moment. (Just so I'm clear: I'm not talking about criticizing e.e. cummings for improper capitalization and punctuation, or complaining that Hitchcock put too many cuts in the "Psycho" shower scene. I'm interested in how and why they do what they do, and what effects they achieve in doing it.)

Some of my favorite movies don't really offer much in the way of story -- but they're all about style and atmosphere. In Wim Wenders' "Kings of the Road," two guys travel around Germany repairing movie projectors in small-town theaters. That's about it. Other great movies resist being broken down into acts and arcs because they're just so full of character and incident and life. One word: "Nashville."

They're nothing alike, but the Coens' "Miller's Crossing" and Shane Carruth's "Primer" are fascinating examples of movies with really complex plots that tick like a fine watch. One's a gangster movie and the other's a science fiction movie (how inadequate those generic labels are). But they're not about what happens so much as the experience you have, the questions you ask, while you're watching them. I suppose you could say they have "twist" endings, but they're organic ones -- not just tricks or stunts to send you out thinking you've experienced something. You can provide your own examples.

So, I just want to propose that we think about movies not as storytelling but as, well, moviemaking. Movies are metaphors, poetry, music. Stories -- aren't there supposed to be seven or eight basic stories in the history of the world? -- can help to give them a structure, a spine. But some movies are invertebrates by nature. (I mean that in a good way.) Some movies have exoskeletons. (I don't know what I mean by that, but it's probably a metaphor for something.)

Let's keep the story in perspective as just one element of a film -- like the aspect ratio or the the way it uses (or does not use) color. It may be more significant than that, or it may be less. Depends on the movie.

Note added 6/22/08: I'm using "story" in the Hollywood sense in this post -- the way screenwriters and development executives talk about "story." Think of the "Story by..." credit on many movies; or the title of the best-selling story-bible, "Story: Substance, Structure, Style and The Principles of Screenwriting," by Robert McKee (see "Adaptation."), the most influential figure in American screenwriting over the last two or three decades.

(Related ruminations in previous posts: "To spoil or not to spoil? (Don't worry.)," "Action: Steven Spielberg and the need for speed," "What the hell's happening in The Happening?."