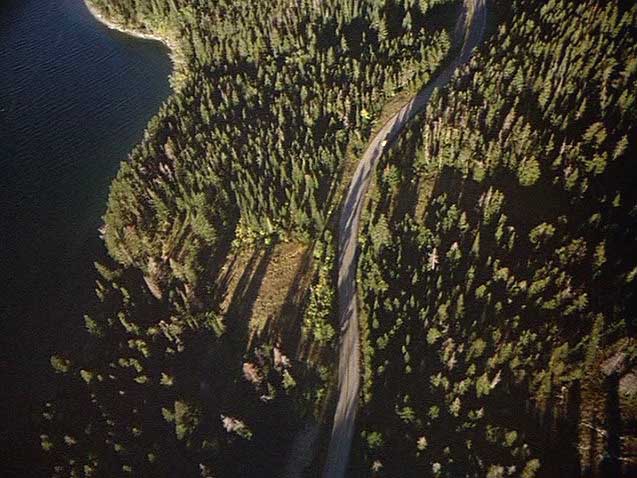 "The Shining": A bug under a microscope.

The most superficial and shopworn cliché about Stanley Kubrick is that he was a misanthrope. This is up there with calling Alfred Hitchcock "The Master of Suspense," and leaving it at that. The cliché may contain a partial truth, but it's not particularly enlightening. It's just trite.

In the free Seattle weekly tabloid The Stranger, Charles Mudede writes about a local Kubrick series, and begins by stating: "Kubrick hated humans. This hate for his own kind is the ground upon which his cinema stands." This is a nice grabber -- particularly for readers who don't know anything about Kubrick, or who want to feel the thrill of the forbidden when reading about him. ("Imagine! He hated humans!")

Unfortunately for readers, this is Mudede's thesis, and he's sticking to it. Here's his summary judgement of "2001: A Space Odyssey":

As is made apparent by "2001: A Space Odyssey," his contempt was deep.

It went from the elegant surface of our space-faring civilization down, down, down to the bottom of our natures, the muck and mud of our animal instincts, our ape bodies, our hair, guts, hunger, and grunts. No matter how far we go into the future, into space, toward the stars, we will never break with our first and violent world. Even the robots we create, our marvelous machines, are limited (and undone) by our human emotions, pressures, primitive drives. For Kubrick, we have never been modern.

OK, that's one interpretation (though it gets the direction of the movement entirely wrong), but I think it's a facile misreading of the film. Is there really something un-"modern" about portraying the raw, simple fact of evolution, with a little otherworldly nudge?

And why does Mudede have such contempt for apes and "animal instincts"? Is he going to apply "Meat is Murder" morality to primates? (Besides, they're so dirty!) Or does he not feel the awesome and primal beauty in the whole "Dawn of Man" sequence? If he doesn't, I suppose it's no wonder he sees no wonder in the rest of the movie.

Kubrick's vision may be unsentimental, indifferent, even cruel, but he's not just a hater. That main ape (identified as "Moon-Watcher" in the credits, and played by Daniel Richter) is the protagonist of the first part of the movie. He's smart, sympathetic, beautiful (look in his eyes), and brave, if the latter isn't anthropomorphizing too much. The film portrays a breakthrough in the evolution of our species -- the use of tools (animal bones) as weapons -- and that development is a formidable one, but hardly a vile or deplorable one. Does Moon-Watcher "hate" his enemy tribe, or is he just battling to survive? Does HAL "hate" Frank and Dave? The term isn't relevant. In one of the most celebrated splices in movies, that first tool becomes a sophisticated satellite, floating in space to the "Blue Danube" waltz. Is Kubrick equating the two (bone = satellite = ancient brutality), or showing -- in a single cut -- a leap across time and space, from primitive to modern technology?

And it's not the ancient, barbaric nature of mankind that derails the Discovery mission. It's intellect and rationality, our "higher" brain functions -- and the germ of ego and emotion that grows, semi-programmed, in HAL's personality. As Kubrick and Arthur C. Clarke have often said, HAL is the most human character in the movie -- and probably the most sympathetic. Not because Kubrick hates mankind, but because HAL is the product (almost the distilled essence) of mankind, and perhaps the next stage in human evolution (not unlike the Replicants in "Blade Runner"). If you don't feel some sympathy for HAL, and some sadness over his absurd fate, when he calmly begs for his "iife" and sings "Bicycle Built for Two" (so funny, so poignant), then I think you're missing out on the most beautiful aspects of the movie.

In "2001," mankind is not defeated or condemned to eternal muck by "our ape bodies, our hair, guts, hunger, and grunts." It's our most civilized, refined, higher brain functions -- our intellect and rationality -- that aren't sophisticated enough to comprehend the advanced intelligence signaled by the monolith. The attitude of the movie (to invoke a couple Shakespearean counter-clichés) is an awestruck, "There are more things in heaven and earth, Horatio, than are dreamt of in your philosophy," not a merely contemptuous, "What is this quintessence of dust?"

It's often been said that Kubrick observes his characters with "godlike detachment." That, I think, is closer to the truth than to say he hates them and all members of their species. (If anything, in arguing for free will in "A Clockwork Orange," he doesn't express enough contempt for Alex and his Droogs.) That yellow Volkswagen bug in the opening credits of "The Shining" is, I believe, his little joke about his directorial point of view. As it scurries through the majestic Oregon landscapes, the director looks down as if viewing an amoeba through a microscope. Is that the same as hate?

Mudede does a similar disservice to my other favorite Kubrick film, "Barry Lyndon." He writes:

Because the world is nothing but shit, the ideal Kubrickian subject must have very low standards and no high hopes. In short, he must be like Barry Lyndon: a man who goes from situation to situation with no particular aim or goal in mind. One moment he is on this side of a war; the next he is on the other side of it. One moment he is rich; the next he is poor. The way the world goes, he goes with it. If he finds happiness, he takes it without question; if trouble appears, he flees from it without hesitation. And if someone is dead or in pain, he always says to himself: "Better you than me." That is the best a human can do in what Kubrick pictured as the worst of all possible worlds.

I've written in some detail about "Barry Lyndon" here. But everything you need to know about how to read the movie is set up very clearly in the opening title, the opening shot, and the opening narration, and the ironic, playful ways the three interact. Again, it's a complex mix: gorgeous, funny, satirical, (sym)pathetic. (OK, Lord Bullingdon seems pretty hateful, but he is a rotten, spoiled child and exactly what his parents have made him. He's not beyond good and evil, just kind of beneath consideration.)

Barry does drift opportunistically from one thing to another -- because he's a con-man and a gambler. And, as the title that sets up Part I explains, in the first half of the film we are seeing "By What Means Redmond Barry Aquired the Style and Title of Barry Lyndon." He doesn't drift because he doesn't care; he plays to get ahead. Sometimes he wins, sometimes he loses (death assures we will all come out equal in the end), and his successes and failures depend as much on chance and luck (the title of Thackaray's first-person narrative was "The Luck of Barry Lyndon") as they do on Barry's skill or cleverness. In fact, he achieves nobility and loses it in the same instant, with one gentlemanly act that clinches his ignoble fate.

Kubrick is a profoundly moral filmmaker, and his deepest and most complex sympathies are with his screwed-up anti-heroes: Johnny Clay (Sterling Hayden) in "The Killing"; the three men awaiting execution in "Paths of Glory"; Humbert Humbert in "Lolita"; Brig. Gen. Jack D. Ripper (Hayden), Gen. Buck Turgidson (George C. Scott), Maj. TJ "King" Kong (Slim Pickens) in "Dr. Strangelove"; HAL; Alex; Barry; Jack Torrance (Jack Nicholson" in "The Shining"; Leonard (Vincent D'Onofrio) in "Full Metal Jacket" (1987) -- even Dr. Bill Harford (Tom Cruise), the butt of the elegant and ingenious conceptual joke that is "Eyes Wide Shut." Nearly all of them are monsters in some way -- or they become monsters at times. None of them is the object of the filmmaker's unmitigated, unambivalent, unambiguous hatred or contempt.

If this were not the case, people would no more be presenting Stanley Kubrick retrospectives than Alan Parker retrospectives. If you don't see the difference... then may Stanley have mercy on your soul.