Sensitivity training: the fallacy of feelings

The "New Political Correctness," as I came to call it during the aughts (though it is neither new nor correct) is the pressure to reframe discussion by controlling language. In recent years it has come mostly from the political right ("moral clarity," "War on Christmas," "moral equivalence," "homicide bombers," "Freedom Fries," "restoring honor"...) and, I insist, is an insidious menace to society even greater than the old-school institutionalized PC that came from the left, because its motives are transparently rooted in demagoguery rather than civility and altruism.

Back in early 2007, Sarah Silverman's "Jesus Is Magic" prompted me to write this:

I've been arguing for several years now that, especially since 9/11, "political correctness" has evolved into a mostly reactionary phenomenon. The lefty PC that began as a way of showing sensitivity to minorities and those who had been discriminated against for years (women, the disabled, etc.) eventually turned into a form of monolithic, euphemistic denial of reality, where questioning was verboten and anything that could be interpreted as doubt or dissent was denounced as "fascist." Now we see the same thing coming from the right. The terminology has changed but the brainwashed thinking hasn't.

How pleased I was, then, to hear Berkeley professor and linguist Geoff Nunberg's eloquent essay on NPR about the American history of the term "sensitivity," recently employed by opponents of the YMCA-like Park 51 community center in Manhattan:

The "sensitivity training" that was originally developed in the 1940s used encounter groups as a path to personal growth. But in the 1960s it was repurposed as a technique to help managers, police officers and others come to grips with the perplexing demands of social diversity. By now, most people associate sensitivity training less with self-actualization than with learning to avoid cultural gaffes and miscues. [...]

But over the long run, the stress on sensitivities probably set back cultural understanding as much as it advanced it. For one thing, it permits people to blur the distinctions between mere thoughtlessness and antipathies that run deeper in the heart. It's only insensitive when Michael Steele uses "honest injun" -- he probably never gave the expression any thought before. But there's a moral obtuseness in talking about the insensitivity of carrying a sign that depicts President Obama as a witch doctor with a bone through his nose. A lack of sensitivity is the least of that person's problems. [...]

And while most people are raised to be polite, it turned out not to be such a good idea for institutions to try to impose deference to the sensitivities of certain groups. In response, a lot of people took to pronouncing "sensitivity" with that mocking tone and derided it under the heading of political correctness.

That actually gave a new life to a lot of the very language the speech codes were supposed to eliminate. When you preface a sentence with "This may not be the politically correct thing to say ..." you can make what used to be mere boorishness sound like a daring defiance of fashionable attitudes.

But it isn't just in the liberal enclaves of the academy that people invoke their sensitivities to trump other objections. People have used that argument to oppose the Islamic center near ground zero, to urge Glenn Beck to move his rally at the Lincoln Memorial, to object to public displays of affection by gays. In fact the controversial cases are usually the ones where honoring the sensitivities of one group involves ignoring the sensitivities or rights of another. Merry Christmas or Happy Holidays -- you're treading on somebody's sensitivities whichever way you go. So these controversies always devolve into squabbles about whose sensitivities should have precedence: "We've been through more than you have"; "We were here first"; "There's more of us than of you."

The sad part is, we humans are overwhelmingly emotional creatures. We know that "emotions aren't reasons," but we don't care. Because we feel that our feelings trump everything else, including your feelings, and reality itself. If only the popular concept of "personal responsibility" extended to people taking responsibility for their emotions, weighing when they are justified and appropriate, and when they are unwarranted and out of proportion. 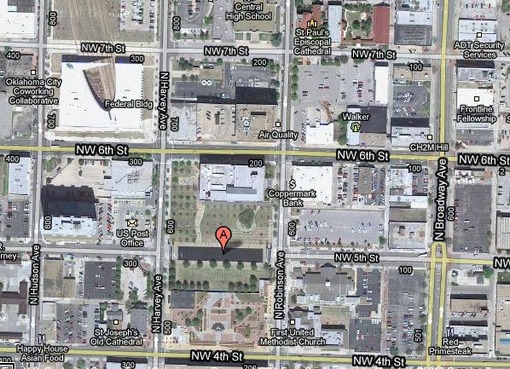 So, let's say -- just hypothetically -- that I'm offended that someone has proposed building a YMCA with a nondenominational Protestant chapel in it, just a couple blocks from the site of the Oklahoma City Federal Building bombing. After all, Timothy McVeigh identified with the white supremacist "Christian Identity" movement (considered a terrorist group by the FBI), and was motivated by the Waco Siege at the Branch Davidian compound (a splinter sect of of the Protestant Seventh Day Adventist Church). First I have to take responsibility for my feelings, which means asking myself: Are they reasonable? My feelings are real, but what are they based on? Just because I feel something doesn't make it right.

I've been known to "correct" (pronounce the word like Delbert Grady in "The Shining") people who use the ugly phrase "confined to a wheelchair." When I was in college a friend in a wheelchair told me what he found objectionable about the phrase: the wheelchair is not confining. It offers mobility. So the term is not only inaccurate, there's an undertone of pity and condescension that many people resent. I understand that, it makes sense, and therefore I've never forgotten it. Sure, it's sensitivity -- in the sense that it shows basic courtesy and respect for another person. I'd no sooner use "confined to a wheelchair" than I would kick a random old lady on the sidewalk.

Now for the depressing part: For most people, facts don't matter. In a recent comment, Kris Pigna pointed out a Boston Globe article that I'd missed, headlined: "How facts backfire: Researchers discover a surprising threat to democracy: our brains." And then there was this NPR piece, "Facts Can't Trump Politics In Immigration Debate" (the term "debate" being used very loosely, since facts have no part in it).

From the Globe story:

"The general idea is that it's absolutely threatening to admit you're wrong," says political scientist Brendan Nyhan, the lead researcher on the Michigan study. The phenomenon -- known as "backfire" -- is "a natural defense mechanism to avoid that cognitive dissonance."

These findings open a long-running argument about the political ignorance of American citizens to broader questions about the interplay between the nature of human intelligence and our democratic ideals. Most of us like to believe that our opinions have been formed over time by careful, rational consideration of facts and ideas, and that the decisions based on those opinions, therefore, have the ring of soundness and intelligence. In reality, we often base our opinions on our beliefs, which can have an uneasy relationship with facts. And rather than facts driving beliefs, our beliefs can dictate the facts we chose to accept. They can cause us to twist facts so they fit better with our preconceived notions. Worst of all, they can lead us to uncritically accept bad information just because it reinforces our beliefs. This reinforcement makes us more confident we're right, and even less likely to listen to any new information. And then we vote.

And from the NPR story:

A major national survey has found that the flow of unauthorized immigrants into the U.S. has slowed dramatically over the past five years, leading to the "first significant reversal" of growth in their population in two decades.

Border security has benefited from an infusion of federal money. Deportations of those in the country illegally are up. FBI statistics point to a consistent drop in violent crime rates in U.S.-Mexico border towns. [...]

Could it be that the country is moving toward what immigration expert Audrey Singer of the Brookings Institution has hopefully noted could be a "moment of reflection" in the emotional and often fact-free national discussion on illegal border crossings?

Why not? Because how we feel takes precedence over all else. It extends to movies, too. We tend to prize emotion above intellectual substance or aesthetics. We value movies that move us. But critic David Sterritt has argued for a corrective to

the predisposition of nearly all film critics to approach their subject(s) in terms that value the emotional over the intellectual and the descriptive over the intuitive. Good movies touch our feelings, of course, but that isn't the only thing that makes them good; and while [critic Kent] Jones knows this--hence his high praise for masters of film-thought like Hou Hsiao-hsien and Abbas Kiarostami, for instance--he too falls into the commonplace pattern of privileging the feelings that good films give him, and signaling his reactions in telegraphic ways that won't mean much to people who aren't equally familiar with the film or filmmaker in question.

What's needed today is a new paradigm of readily accessible yet rigorously thoughtful prose combining theoretical analysis with intuitive ideas about cinema and the aesthetic world it creates.

As I said about film criticism a while back, I think most of our stabs at rational analysis are noble attempts to overcome the limitations of the human brain. But we are human, and we can make that effort. So, by all means, especially now, let's be sensitive... and be reasonable.