Moviegoers who feel too much 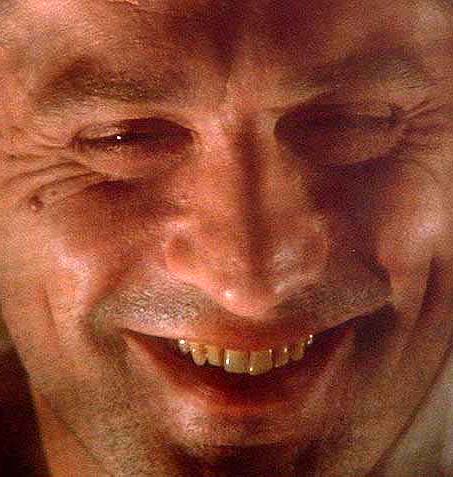 Robert De Niro in the last shot of Sergio Leone's "Once Upon a Time in America": How does this make you feel?

"Sometimes the best movies are the ones we make up." -- from the trailer for Michel Gondry's upcoming "Be Kind Rewind" (2008)

Between the idea And the reality...

In his review of Kent Jones' book "Physical Evidence: Selected Film Criticism," David Sterritt (for 35 years the film critic of the Christian Science Monitor) poses a challenge to movie critics and filmgoers alike:

Given his gift for perceptive film-critical thought, I wish Jones would now address himself to a problem that few critics (including me) have tackled with the care, energy, and resourcefulness that it demands: the predisposition of nearly all film critics to approach their subject(s) in terms that value the emotional over the intellectual and the descriptive over the intuitive. Good movies touch our feelings, of course, but that isn't the only thing that makes them good; and while Jones knows this--hence his high praise for masters of film-thought like Hou Hsiao-hsien and Abbas Kiarostami, for instance--he too falls into the commonplace pattern of privileging the feelings that good films give him, and signaling his reactions in telegraphic ways that won't mean much to people who aren't equally familiar with the film or filmmaker in question.

What's needed today is a new paradigm of readily accessible yet rigorously thoughtful prose combining theoretical analysis with intuitive ideas about cinema and the aesthetic world it creates.

OK, so let's tackle it! (Prepare to comment.) Seriously.¹

When somebody says they "admire" a movie without much "liking" it (or being "moved" by it), they may be addressing, at least superficially, what Sterritt is getting at above. But how much can we, or should we, attempt to separate our emotional responses from our intellectual observations, our descriptions ("This is what happens") from our intuitions ("This is what's going on")?²

My standard joke, when somebody asks what a movie is "about," is to describe the movie in stylistic or thematic terms -- which, in all honesty, speak to me more directly and powerfully than the plot. What's "Barry Lyndon" about? Oh, it's about slow, stately zooms. Or, it's about a man who keeps trying to exert his free will only he can't because he's trapped in a Stanley Kubrick film/frame. To me, both those descriptions are just different ways of saying the same thing, and in stating them I'm only being semi-facetious.

Unquestionably, reviewers on daily or weekly web or publication deadlines, and within the space restrictions their formats allow, are pressured (by editors, readers and the marketplace) to emphasize reportage (description) and verdict (emotion) over analysis (which I'd characterize as intellect + intuition). The best reviews (see Manohla Dargis's recent takes on "There Will Be Blood" and "4 Months, 3 Weeks and 2 Days" in the New York Times for two fine examples) combine elements of all of them.

Above: Michel Gondry's handmade version of the "Be Kind Rewind" trailer. The movie is always there on the screen AND in your head simultaneously.

But a movie is an experience, and as human beings, we have emotionally colored responses to experience (even if that response is boredom or disengagement, or curiosity). It's dishonest to pretend that process isn't at work when we watch a movie. While I can appreciate the benefits of trying to concentrate on analysis over pure (un-analyzed) emotional response, I'm not so sure there's much to be gained from artificial (and inevitably failed) attempts to divorce one from the other. As the Portuguese neuroscientist António Damásio wrote in his (marvelous!) book, "Descartes' Error: Emotion, Reason and the Human Brain" (1994):

... [E]motions and feelings may not be intruders in the bastion of reason at all: they may be enmeshed in its networks, for worse and better. [...]

It is thus even more surprising and novel that the absence of emotion and feeling is no less damaging, no less capable of compromising the rationality that makes us distinctively human...

Analysis may help reveal how a particular film does what it does, but it alone can't convey why it should matter to anybody. That, of course, is assuming that one of the goals of a film is to communicate an experience to an audience or a viewer, and that the criticism shares that desire. You can understand the conceptual point behind Warholian soup cans or Brillo boxes, but if they don't make you smile (or frown, or go all red in the face) then, I submit, you're not fully engaging with them, what they mean, how they mean it, or why they exist. In which case: Who needs criticism? Who needs aesthetics? Just make your way through the museum gift shop and decide where you're going for lunch.
Advertisement

Sort of reminds me of the technical specs for a recording. The various numbers and measurements can tell you something, but they don't reveal anything about the music. To quote the liner notes from Steely Dan's "Katy Lied" (1975):

"Transfer from master tapes to master lacquers is done on a Neumann VMS 70 computerized lathe equipped with a variable pitch, variable depth helium cooled cutting head. The computerized logic circuits of the VMS 70 widen and narrow the grooves on the disc in accordance with its own bizarre electronic mentation for reasons known only to its designers; this accounts for the lovely light and dark patterns that can be seen on the surface of the pressing. Vinylite compound is used. For best results observe the R.I.A.A. curve."

I hope you see my point.

Another of Damásio's books is called "The Feeling of What Happens,"³ a title that gives me goosebumps -- and evokes, for me, Pauline Kael's "When the Lights Go Down." In fact, Damásio begins by writing about a theatrical moment:

I have always been intrigued by the specific moment when, as we sit waiting in the audience, the door to the stage opens and a performer steps into the light; or, to take another perspective, the moment when when a performer who waits in semidarkness sees the same door open, revealing the lights, the stage, and the audience.

I realized some years ago that the moving quality of this moment, whichever point of view one takes, comes from its embodiment of an instance of birth, of passage through a threshold that separates a protected but limiting shelter from the possibility and risk of a world beyond and ahead. As I prepare to introduce this book, however, and as I reflect on what I have written, I sense that stepping into the light is also a powerful metaphor for consciousness, for the birth of the knowing mind, for the simple and yet momentous coming of the sense of self into the world of the mental.

Kael -- one of the most taste-driven, least analytical of American movie critics -- lifted her title phrase out of something she'd written: "There's nothing quite like that moment when the lights go down and all our hopes are concentrated on the screen..."

While Damásio speaks of stepping into the light and Kael of sitting in the dark, they're both attempting to describe an experience that extends beyond the rational or the intellectual. And film wouldn't exist -- or wouldn't matter to us -- without it.

Sterritt is onto something important when he says: "Good movies touch our feelings, of course, but that isn't the only thing that makes them good..." Many people express skepticism that because cinema is supposedly "better at" evoking emotions, it can't express much beyond feelings or atmosphere or mood. I'd say that's a gross oversimplification -- and a misapprehension of the power of the art form. So, it may sound like a contradiction to some of what I've said above, but I'd argue that just because something doesn't lend itself to explication (or even description) in words doesn't mean there's not a cerebral/aesthetic dimension to it, or something worth analyzing beyond the emotions it may or may not evoke.

That children intuitively understand various styles of visual grammar before they can read or speak should tell us something about how we perceive and comprehend the process of watching a film, how closely exposure to a sequence of images may correspond to human consciousness itself, "the feeling of what happens." And, it turns out, the human brain responds to direct and vicarious/abstract experiences with uncanny similarity -- though, consciously, we grasp the difference.

Then again, maybe we just dreamed it.

OK, what do you think? I mean, feel? Do you think people -- or even critics -- place too much emphasis on emotional responses to movies? Is that a bad thing? A good thing? What?

¹ Girish started a provocative discussion along related lines recently ("Films: Evaluation & Value"), though he began by asking: "How stable (or unstable) is our personal evaluation of a film over time?" Obviously, the film itself doesn't change (unless, say, it's "Blade Runner") but our assessment of it, or our feelings about it, may well change -- in a sudden Eureka! moment (perhaps with an assist from reading a revelatory piece of criticism that makes you see it differently), or more subtly, as the movie stays with you, nags at your subconscious, and you realize its worked its way under your skin in ways you didn't immediately realize.

² As I've often said (quite sincerely), I don't care all that much about whether a critic likes a particular film, or director, or actor; I just want to know what he/she sees in the work. If movies allow us to see a world through somebody else's consciousness, then worthwhile film criticism allows us to see a movie, or a body of work, through that critic's eyes. I'd much rather read a rigorous, engaged analysis of a movie than a consumer-guide review. The best reviewers (who may or may not also be critics) share their insights and perspectives on a film so that the reader gets an idea of what they experienced -- which is not the same as saying the reader should expect to have an identical one.

³ Full title: "The Feeling of What Happens: Body and Emotion in the Making of Consciousness" (2001)