Raping Dakota: From the Sundance resumé movie to "Indie Guignol" 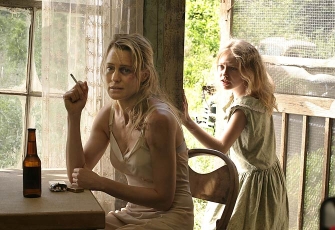 Raping Dakota and Feeling Minnesota: Despite all the publicity, "Hounddog" ain't nothin' but a dog, say critics. It's not dangerous, after all.

"As its poster and advertising remind us, "Quinceañera" won both the jury and audience prizes at the 2006 Sundance Film Festival, and those honors are strangely indicative of its dramatic and stylistic limitations. If there was ever a movie that seemed precision-tailored for a Park City reception, this is it -- the quintessential example of the festival's favored brand of hand-crafted, slice-of-life, youth-oriented filmmaking that expresses affection for a nicely captured American subculture. In other words, it's a Sundance specialty, right from the box.

"This is a shopping-list movie: A double coming-of-age story spiced with local color; a bittersweet portrait of a Los Angeles neighborhood in transition; a warm and soapy celebration of a Mexican-American community. "Quinceañera" is also a thoroughly predictable melodrama that's both kitchen-sink and 'After-School Special.'"

-- from my review of "Quinceañera" last summer

One of the debilitating side effects of the pop-culture "mainstreaming" (if I may use an ugly marketing term) of the Sundance Film Festival brand over the last 20 years or so has been the over-glorification of what I call resumé movies. These are films, cobbled together from familiar elements designed to appeal not only to a Sundance jury (or audience), but with an eye toward getting the filmmakers some "Hollywood" money for their next picture. And that, in itself, is fine. Nothing wrong with trying to climb the ladder of success. But I don't particularly want to watch somebody's resumé on a movie screen, particularly when it's sold to me as a "personal story" (or a "subversive thriller") and plays like pure Hollywood formula schlock.

John Sayles admits that "Return of the Secaucus 7" was just such a resumé picture. After years of writing horror and exploitation scripts for Roger Corman ("Piranha," "The Lady in Red," "Alligator"), he wanted to start directing his own, more personal stuff. The reason there's a basketball game in the movie was simply to show that he knew how to handle an action sequence. But Sayles was expanding his craft and moving from formulaic commercial genre filmmaking toward more personal projects, not the other way around.

Remember "Project Greenlight," the HBO (then Bravo) series, produced with good intentions by Matt Damon and Ben Affleck, with the Weinstein Miramax? The deal was that they would choose an unproduced first-time script and give a novice director a chance to make the movie, which Miramax would finance and distribute. By the third (and final) season, they joined forces with Wes Craven and were making a horror exploitation film for Miramax's Dimension division.

"Making cynically made low-budget horror films for the purpose of making a small profit is not the reasons that I got into 'Project Greenlight,'" Damon said angrily early in that final season. It's not that people can't make great, personal, visionary horror movies (see the best work of David Cronenberg, and Wes Craven himself) -- but neither Damon, Affleck or Craven thought the script the studio wanted was very good to begin with. (Affleck's memorable line: "It's one of those things where you read it and think, 'Is this interesting and creative and unusual or is this just dog shit?'")

In the end, none of the "Project Greenlight" movies made much of an impression, artistically or commercially. (Remember "Stolen Summer"? "The Battle of Shaker Heights"? "Feast"?)

But Sundance still hasn't learned the lessons of "Project Greenlight." As David Bordwell sees it, the festival is overrun with what he calls "Indie Guignol" -- which are just generic resumé movies designed to use shock value to take advantage of the Sundance publicity:

In an article originally called “Sundance Movies Are Bad for You!” but now more tamely titled “The Trouble with Sundance,” Richard Corliss complains that indie movies have become so predictable that they form a genre in themselves. They focus on relationships, especially those of a dysfunctional family or a fumbling love affair, and treat their principals with a dutiful mix of pathos and humor. Where, he asks, are the more imaginative narrative and stylistic maneuvers fostered by the Coen brothers, Jarmusch, Tarantino, and the like?

That’s only half the story. True, indie films are often pallid comedies and melodramas. But just as often, and sometimes at the same time, they’re desperately sensationalistic. In these the formal conservativism to which Corliss objects is wedded to hot-button content. We call a bland Indie film quirky, but there are others we call dark. They’re Indie Guignol.

Bordwell suggests that the models for these films were indie successes like Steven Soderbergh's "sex, lies, and videotape" (1989) and David Lynch's "Blue Velvet," and that "for a couple of decades the indie scene has taken on ever more provocative themes and subjects, from 'Suture' and 'Boxing Helena' through 'Happiness' and 'Boogie Nights' to 'Hard Candy' and 'Little Children.'" Of course, some of these movies are better (and truer) than others (and you must read his entire piece). But then Bordwell moves in for the kill:

The central conceit of Indie Guignol is that to be creative in cinema you have to be dangerous. James Mottram’s book "The Sundance Kids: How the Mavericks Took Back Hollywood" is an informative overview of Indiewood, but too often it equates being a “maverick” and having a “vision” with an adolescent naughtiness.

He approvingly reports Fincher’s reaction to the ending of "Se7en." “While it reinforced the notion that justice will prevail, Fincher takes a private goulish pleasure in imagining Mills being ‘carted off to be gang-raped by prison inmates.’” Mottram notes, perhaps unnecessarily, that Fincher has a “sour vision of humanity” (155). Likewise, Sharon Waxman’s "Rebels on the Backlot" celebrates the fact that her “rebel auteurs” made movies that “combined their brutality with humor” (xi), as if violence and comedy didn’t ricochet off one another in virtually every student horror film ever made.

Advertisement
David said he'd liked to have waited for the