“The Spitfire Grill” won the audience award at this year's Sundance Film Festival, which says less for the audience than for the movie. It's an unabashedly manipulative, melodramatic tearjerker with plot twists that Horatio Alger would have been embarrassed to use, and the fact that it's so well acted only confuses the issue.

The movie takes place in Gilead, Maine, another one of those small towns like Salome, Texas, and Whistle Stop, Ala., where everybody knows one another and they all gather every day to trade the latest news. Towns like this don't much exist anymore, except in sitcoms, where the characters are constantly “dropping in” on one another to prod the plot and explain the latest developments.

Gilead, so far north that the locals call other Americans “flatlanders,” has just had a stranger come to town. Her name is Perchance Talbott, Percy for short, and she has chosen the town after getting out of prison. In a nice little scene, the local sheriff (Gailard Sartain) lines up a job for her as a waitress at the local restaurant, which is run by an older woman named Hannah (Ellen Burstyn) and already has a veteran waitress named Shelby (Marcia Gay Harden). It also has a regular customer named Joe (Kieran Mulroney).

Sometimes as a movie critic you have to knock yourself sharply on the ear to dislodge the last movie you've seen and pay attention to this one. Watching this plot unfold, I was remembering last week's “Heavy,” which also premiered at Sundance; its cafe was run by an older woman (Shelley Winters), and had a veteran waitress (Deborah Harry) and a young waitress (Liv Tyler), and had a regular customer whose name was Leo, not Joe, although he was played by Joe Grifasi. Also echoing in the caverns of my memory were several other movies about stalwart women running cafes and striding above the local gossip: “The Ballad of the Sad Cafe,” “Fried Green Tomatoes,” “Staying Together” and of course “Bagdad Cafe.” In “The Spitfire Grill,” which weaves several fairly over worn feminist strands into its quilt, everyone of course immediately gossips about where Percy came from and why she would want to settle in Gilead. (Ever notice how in the movies people who believe they live in the best place on Earth are always resentful when an outsider wants to move there?) Percy puts an end to the gossip by making a loud announcement at lunchtime: “I've been in prison. So now you know.” Yes, but what was she in prison for? I wondered. And then my Automated Mental Plot Analyzer hummed to life, and suggested that in a movie of this sort it is almost inevitable that she committed her crime in self-defense against an abusive man. Is that what did happen? My lips are sealed.

Percy is soon asked out by Joe. She grows unhappy at his questions and blurts out the worst part of her past history (such characters of course never blurt out the best parts). Then Hannah breaks a leg and is laid up in her room, and so Percy and Shelby have to run the restaurant together, and Shelby's husband, Nahum (Will Patton), is unhappy because he thinks this outsider is angling to take over the restaurant.

Meanwhile, Percy learns that Hannah puts canned goods in a sack and leaves them outside by the old stump, where they are picked up at dawn by a mysterious hooded figure. No points for wondering if the mystery man has any connection to Hannah's son who fought in Vietnam. What's clear is that Hannah can no longer run the cafe, and so Percy suggests one of those essay contests like she saw on TV, where people send in $100 and say why they deserve to get the cafe, and the winner takes over.

The last half-hour is more than one movie can bear, as sacks of mail arrive, townspeople help judge the entries, and Joe's old father is so moved by one of them that he leaves the house for the first time in years, while meanwhile there is skullduggery involving the money, and a misunderstanding involving the sack of canned goods, and a scientist thinks he can extract a cancer cure from the local trees, and if I told you that someone is swept down the river and into the rapids, you wouldn't believe me, would you? It is impossible to believe the events manufactured so prodigiously by “The Spitfire Grill,” and yet there is no hint of a smile: Lee David Zlotoff, who wrote and directed it, means it seriously. What redeems it somewhat is the level of the acting. You can see how good actors can make almost anything believable. Alison Elliott is a calm, strong presence at the center, and all of the others are good, too--especially the sheriff, Gailard Sartain, and Will Patton as the mean husband (although the screenplay gives him a speech to deliver that even Tammy Faye Baker would have found over the top). They make a lot of their moments work very nicely. But the movie as a whole is preposterous. 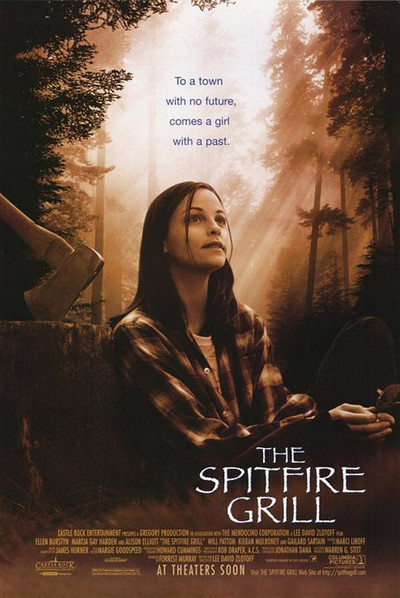 Will Patton as Nahum Goddard