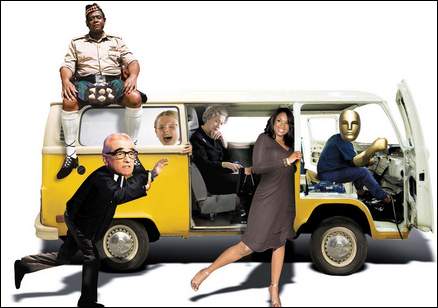 Roger Ebert is pretty darned good when it comes to predicting the Oscar winners. (I, on the other hand, have never, ever won an Oscar pool. I'm terrible at it.) This year, he also agrees with most of the choices he thinks the Academy is going to make. So, what do you think? Visit RogerEbert.com, vote for your personal favorites, and enter the Outguess Ebert contest to predict the winners. You won't win an Oscar, but you could win one of seven trips to Mexico, or a copy of Ebert's "Movie Yearbook 2007." (Unless you live in Florida, where you are disenfranchised from participating in the contest because of your own laws. Maybe it's Katherine Harris's fault, I don't know.)

Martin Scorsese has made better films than "The Departed," but then he has never made a bad film. The prospect of a great young director, Alejandro Gonzalez Inarritu, winning his first Oscar is matched by the possibility that Scorsese will win a much-delayed one. With the loss of Robert Altman, is any active director more senior and better than Clint Eastwood? And what a pure, stark war movie he has made in "Letters From Iwo Jima." His conception is so original -- two movies (the other is "Flags of Our Fathers"), one in English, one in Japanese. Both considering the same battle, both detached, low-key, lacking in action cliches.

No movie is harder to make, in a technical sense, than a comedy. But what a priceless one Jonathan Dayton and Valerie Faris have made in "Little Miss Sunshine." It has this combination of the transgressive and the risk-taking of this particular American genre, with Alan Arkin leading the parade as a vulgar but family-loving grandpa.

And what an achievement from Stephen Frears in "The Queen," where Helen Mirren bares everything in an original closeup that asserts she "is" the Queen, not an imitator, but an embodiment.

And yet Oscar voters often prefer serious, big-themed subjects of the kind seen in "Babel," a powerful group of international stories in which the secret human connections only gradually unfold. But the big upset could be "Little Miss Sunshine" because it touched something deep in the American psyche, and had people identifying with this odd family who pulls together when it matters the most.