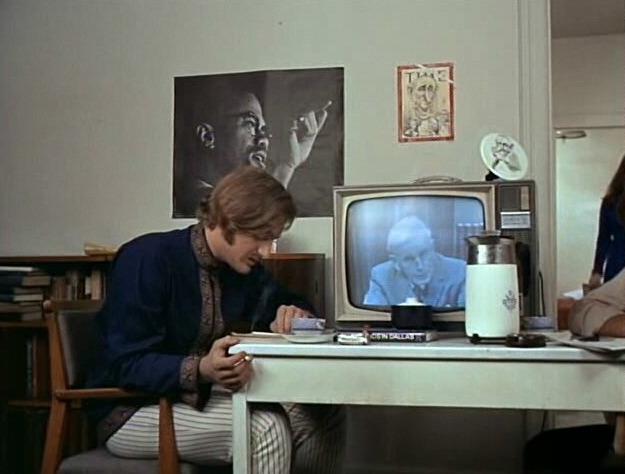 The public and the private, the personal and the political: Although this isn't precisely the opening shot of "Greetings" described here, it's part of it, showing the same TV, the same book and the same coffee pot in the same apartment. Frame grabs to come...

Excerpt from my programme notes for a double-bill of "Greetings" and "Hi, Mom!" -- the first presentation in a Brian De Palma series programmed by R.C. Dale at the University of Washington, April 14, 1981:

.... "Greetings," De Palma's 1968 anti-military/anti-war movie mélange, was the first of his films to find an audience. In fact, it was so successful that "Hi, Mom!" was conceived as a sequel (originally to be called "Son of Greetings"). "Greetings" is an ebullient comedy, and a brazenly disturbing mixture of movie-movie acrobatics and American counter-culture politics in the manner of pre-l968 Godard. Critics have emphasized over and over De Palma's debt to filmmakers such as Godard and (especially over-emphasized) Alfred Hitchcock. In "Greetings," Michelangelo Antontoni's "Blow-Up," another hip youth-cult film of the time, also looms large. But the filmmaker whose specter really presides over this film is that of Abraham Zapruder, the man who made the most famous home movie of the Kennedy assassination at Dealy Plaza. The first thing we see in DePalma's movie is a television set carrying a speech by President Johnson. In front of the set sits a book: "Six Seconds in Dallas." "Greetings," made five years after the assassination, is a picture of a nation obsessed with six seconds of 8 mm Kodak movie film. Right away, De Palma begins detailing the dissolution of the barrier between the personal and the political in American society; just as, in this and subsequent films, he will dissolve the barrier between the film and the audience, between horror and humor, between public and private.

"Peeping through my window / Seeing life on little screens." -- "Hi, Mom!" title song All of these elements are operating splendidly in the first shot of "Greetings." President Johnson, giving a televised speech, is speaking both to the audience there in the auditorium with him and the audience watching him on TV. In front of the television set on which we are watching him is a coffee pot, partially obscuring a portion of the screen. We're not just watching Johnson on TV, we're watching him on a particular TV set in a particular room in someone's house somewhere --which puts us at three steps remove from that hall where we see Johnson speaking. When LBJ turns to the camera to address a question directly to his audience, we experience a strange Chinese-box sensation. Johnson, speaking directly to the TV camera, is also speaking directly to his audience watching television. We, watching this television set in this movie, suddenly find him addressing us, too. The physical reality of Johnson's speech becomes a part of the fictional film "Greetings"; all these layers are at once telescoped and collapsed into a single frame-within-a-frame. Appropriately, De Palma bookends the film with this shot.

[Other De Palma films begin with TV screen images-within-images, including "Sisters" and "Femme Fatale." "Dressed to Kill" puts its characters into frames: Angie Dickinson in the steamy shower stall; her husband shaving in the mirror.]

Even more tension is added to this moment when you consider how De Palma is playing with the dimension of time: Johnson delivered the speech at a particular moment; the videotape of that speech was broadcast at another time -- say, on the evening news [this was before the preponderance of "live" coverage on cable news}; De Palma, after making or obtaining a videotape of his own from the broadcast, played it through the television set and filmed it at some other time in 1968; we are watching that film now on April 14, 1981. Johnson, in the moment he looks through the camera lens at us -- now -- slices through all those levels of distanciation and the moment becomes a direct and immediate one again. Time is captured on film and renewed. If this is beginning to make you feel a little dizzy, it should. It's this kind of mind-boggling tension upon which De Palma's films thrive. Each film is like a pair of mirrors facing each other with the audience trapped in the space between.

In "Greetings," Gerrit Graham plays Lloyd Clay, a conspiracy buff who find evidence everywhere -- but especially in blow-ups made from the Zapruder film -- that he feels proves conclusively that the Warren Commission was a whitewash, that the FBI lied, and that there was indeed a man with a gun behind the grassy knoll. De Palma, too, is clearly fascinated by the "frozen" moment in time that a frame of film represents.

Godard called cinema "the truth 24 times per second." But De Palma, echoing David Hemmings in "Blow-Up," also realizes that the closer you examine a frame (one twenty-fourth second) of film, the less tangible the "truth" of the evidence may become. One person may clearly see an assassin; another may see only a grainy blob. Part of De Palma's infatuation with split-screen and frames-within-frames lies in their ability to bombard the audience with a lot of information at once, allowing viewers to choose what they want to watch at any given moment -- like Jon Rubin (Robert De Niro), picking the most interesting apartment windows in "Hi, Mom!," or Allen Garfield watching three porno movies at once in the same film.

Film is a medium in flux; time will never stand completely still for scrutiny, even when captured with a movie camera. So, De Palma plays with that flux. In "Obsession," we move from 1975 to 1959 in one apparently seamless shot. In "The Fury," the past and the present occupy the same frame simultaneously as Amy Irving has a psycho-kinetic vision on a stairway. And in "Greetings," well, there's that opening/closing shot.

In what is probably the funniest and most unsettling scene in "Greetings," Lloyd draws diagrams of bullet paths on the nude body of his sleeping girlfriend to prove that the doctors provided the Warren Commission with false information. Suddenly, in a rather jarring reminder of the film's first shot, he looks directly into the camera and, on the verge of hysteria, shouts his assassination theories at us. We thought we were witnessing what Clay's friend Jon Rubin, will later call a "private moment." What could be more private, after all, than this intimate scene in these people's bedroom. But all at once De Palma and Gerrit Graham upend our position as spectators. A private moment, splashed across a movie screen, becomes a public spectacle. The private and the public, the personal and the political, are fused. A decade later, this bedroom assassination-theory scene will find its echoes in Woody Allen's "Annie Hall."...