One shot: They wrote that

To some, it's just another genre picture. Composition, color, movement, texture, shapes, faces, expressions, bodies -- that's where you begin to experience what this montage sequence is "about."

If film is first and foremost a way of seeing (and I believe that to be the case, even if not everyone sees seeing the way I do), then what we see in a shot, or a series of shots, is as important as... as anything. The movie is what the film does, as the mind is what the brain does. One of my oft-used analogies is Picasso's "Guernica." Now, you can know or not know what the painting is "about" -- the story it depicts, the historical-political events upon which it is based. You may even sense the emotions the artist is expressing and the techniques he's using to express them. But all those things don't even come close to adding up to "Guernica." "Guernica" is a large composition designed to evoke responses in the viewer. That's where you begin to discover the thing itself.

All of which serves as an introduction to one image from "No Country for Old Men" that I would like to point out (separate from the longer piece[s] I'm working on now). It's a second or two of film that occurs just after Llewelyn Moss (Josh Brolin), who is being chased through the desert by a truck at night, jumps over a river bank and glances back and up to see how close his pursuers are. It involves seeing dust produced by the braking truck, illuminated by the headlights as it breaks over the edge of the bank, darkly silhouetted against the light from above. It's Moss's POV, and it's a detail we notice because he notices it. The hounds of hell are loose on his trail (or will be in moments), but here's this moment of sinister beauty develops from it, and sticks around just long enough to register before more urgent matters assert themselves.

It's a directorial (and photographical) coup in many ways, but I was delighted to discover that it's one of those images the Coens visualized in advance and actually chose to record in an early version of their screenplay (which deviates from the finished film in several significant aspects):

Moss is almost to the steep riverbank. Another whump of the shotgun.

Shot catches Moss on the right shoulder. It tears the back of his shirt away and sends him over the crest of the river bank. Moss airborne, ass over elbows, hits near the bottom of the sandy slope with a loud fhump.

He rolls to a stop and looks up.

We hear a skidding squeal and see dirt and dust float over the lip of the ridge, thrown by the truck's hard stop.

That moment, in the middle of a deadly chase, is a "privileged moment" of a kind that, perhaps, Francois Truffaut did not have in mind when he coined that phrase, but it sure is one. For all we know, it could be the last play of the light that this man will ever see -- and we share the site with him. It's natural, it's what perhaps anyone in this situation could see, but the Coens make sure that we do see it. The next several images I don't want to describe right now, but they are among the most electrifying and surreal in all of cinema -- at least since the relentless approach of the nightmare dog in Buñuel's "Los Olvidados" (1950). But at this moment, we're awash in sensations: the squeal of the tires, the clang that tells us something or someone is getting out of the unseen truck atop the bank, the cold river into which the wounded and disoriented Moss is about to plunge...
Advertisement 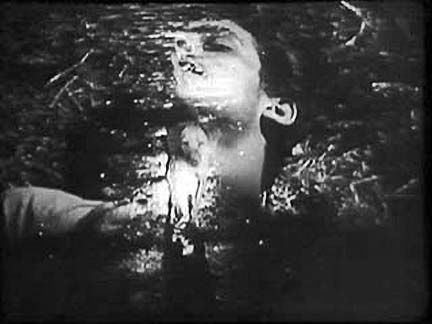 But I just wanted to point this out, and that they wanted to be certain it was not just in the film, but even in the screenplay (which in other respects is somewhat different than the film itself). Writers often do that kind of thing, and the credit (or blame) for a shot or sequence will usually be attributed to the director, even if it was right there in the script. But it is the director who bears responsibility for realizing those images, and sequencing them, and presenting them so that they do what they need to do. The Coens, being their own writers, directors, producers and editors, pretty much understand what they're looking for. And they recognize what they've got when a miracle drops in their lap: the birds, and shadows of birds, over the highway in "Blood Simple"; the pelican plopping into the ocean at the end of "Barton Fink").

"Content, as I see it, is a series of connecting shocks arranged in a certain sequence and directed at the audience." Sergei Eisenstein, you are so right! (I wish I liked your movies more.) Shocks as content -- the junior-high equation [ART = FORM + CONTENT] trembles, previously secure elements threaten to swap sides. What Eisenstein theorized about cinema goes for writing, too: words as shocks; shocks arranged in a certain sequence. Words call up images and the images recur, mutate, cross-refer as the words extend in linear space and the reading-experience extends in time." -- Richard T. Jameson, "Style vs. 'Style'" (Film Comment, March/April, 1980)

If Michael Bay turns everything up to 11 and assaults you until you feel bludgeoned and numb, the Coens do the very opposite. Bay, from the Alan Parker school of airless imagery, tries to shut you down, to restrict your imagination to fit his literal forms. (If you feel like cattle being funneled through the slaughterhouse, so be it.) The Coens open up the doors of perception, so that you become hyperaware of the many vibrant sensations -- light, color, sound, motion -- that are in the world around us every day, the kinds of living details to which most (flat, inert, mechanical) films just aren't attuned.

So, one brief shot of the dust in the headlights -- it's a small thing, but it makes all the difference. It's just one of the thousand natural shocks that flesh is heir to, and one reason I emerge from a movie like "No Country for Old Men" feeling like my senses, my emotions, my mind, have been stimulated, invigorated rather than dulled.